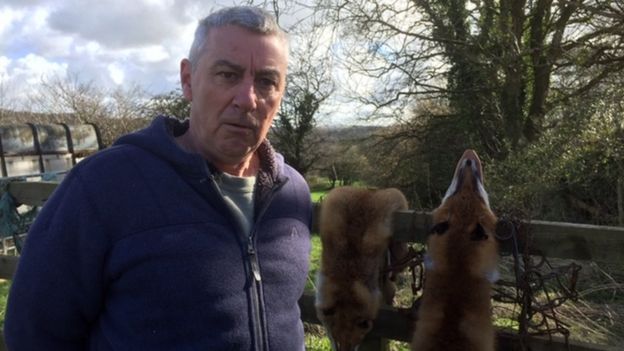 A man who describes himself as the last fur-trapper in the UK says he should be allowed to continue his activities without fear of persecution.

David Sneade, of south Wales, is legally trapping foxes and supplying a demand for fox fur in Europe and beyond.

But animal rights activists said he was causing unnecessary suffering to foxes. They want a law banning the practice.

Snaring foxes is legal and a method of pest control with strict guidelines.

While fur farming was banned in the UK in 2000, fur trapping is still legal for certain wild animals such as foxes, rabbits and mink.

A Welsh Government spokesperson said snares should only be used when other control methods were not available.

“We introduced a new code of practice for snares in 2015 and are considering options to regulate their use to help ensure the code is adhered to,” the spokesperson said.

“We are not planning to review current regulations on fur-trapping or selling fur from non-licensed wild animals like foxes and rabbits.”

“I’m helping the environment by keeping the fox population down,” Mr Sneade said.

In an eight-week season each winter, Mr Sneade said he catches about 300 foxes. Most will be exported to Sweden and North America where they will be used as fur trimmings for coats or as whole fox furs.

“The fox population needs keeping down because they do so much damage to ground-nesting birds, also for sheep farmers, they take a considerable number of lambs each year,” he said.

“It’s got to be done whether people like it or not and the only effective way is to snare them.”

Footage captured by a member of the public and seen by BBC Wales showed a fox struggling in a snare set by Mr Sneade who is then seen killing it with a wooden pole.

The footage has been studied by an organisation investigating animal cruelty who say Mr Sneade is ignoring the guidelines on snaring.

Hunt Investigation Team studied the footage and said guidelines were “no use” because they did not stop animals from suffering.

Bev Garside, the team’s spokeswoman, said: “I challenge any politician either UK or Welsh Government or the Countryside Alliance.

“Anyone who is prepared to stand up and justify or legitimise the use of snares – I will go against them because they are inherently cruel on every case.

“I think there is a situation here where authorities need to step up. In terms of David Sneade, he needs to stop now.”

But Mr Sneade said he has nothing to hide and admitted there was inevitably some suffering when any animal is killed.

“It [the fox] would be suffering with diseases like mange anyway. That’s just the cycle of life and death,” he said.

The Welsh Government said snares should only be used when other control methods are not available and a code of practice was introduced in 2015.

A spokesman said: “We are not planning to review current regulations on fur-trapping or selling fur from non-licensed wild animals like foxes and rabbits.”

RSPCA Cymru said it could not comment on individual cases but they opposed the use of snares and any other trap that causes suffering to animals.

The charity is campaigning for an outright ban on the use of snares in Wales.

But Mr Sneade said he was determined to carry on.

This article was first published by BBC News on 4 March 2020.

Okay, then I’ll use the same defense when I do that to him. LOL

He should be skinned to keep the population of barbarians like him down!

disgusting and too cruel – shame on all who hunt a lovely animal and shame to those who buy the fur.

Death wish to this vile animal murderer! The only good hunter is a dead one! Hunt the hunters! An eye for an eye!

With the usual “stealth” the twisted use to lie to themselves.