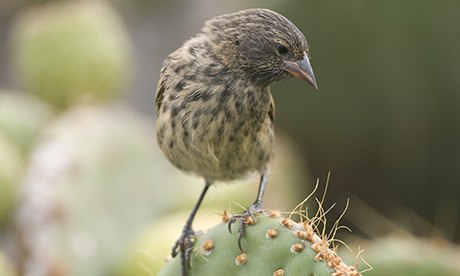 The Galápagos finches are part of the history of science. Darwin collected them during the round-the-world voyage of HMS Beagle and their study helped the naturalist conceive the theory of evolution. Although all the birds belonged to a single group, the 14 species were spread across different islands in the archipelago. Darwin developed the idea that geographical isolation and exposure to varying environmental conditions explained why they had evolved differently from a common ancestor. In particular he emphasised the divergent form of their beaks, some suited to a seed-based diet, while others adapted to eating plants or insects.

But this natural habitat is endangered. The International Union for Conservation of Nature now lists two of the finch species as critically endangered. In several other cases the population is in decline. The most severe threat to their existence seems to be a common fly from Brazil and other South American countries, Philornis downsi, which was accidentally introduced to the islands in the 1960s.

The flies lay eggs in the finches’ nests that hatch into larvae. In turn these find their way into the nasal cavity of the fledglings, leading to deformation of the beak. At night they feed on their blood, sapping their energy to such an extent that some of them die – as many as a third in the case of the mangrove finches, according to a recent article by Elizabeth Kolbert, published in the Yale Environment 360 online magazine.

The problem was identified in the 1990s but until now nothing has been able to prevent the parasite from spreading through the islands. A single nest may be home to 100 voracious larvae. Some finch species have started eating them, but this adaptation may well be too slow to protect the population. The Charles Darwin Foundation, the Galápagos National Park and San Diego Zoo are planning to collect some mangrove finch eggs next year and try to raise fledglings in incubators.

Other approaches have been considered, such as introducing one of the fly’s natural predators, but such methods entail risks. Alternatively, decoys imitating the smell of the birds could be produced so that the flies would lay their eggs in traps. But the appropriate odour has yet to be determined. It is also very difficult to breed the flies in the lab.

A solution proposed by a graduate student at the University of Utah might help the birds to protect themselves. Sarah Knutie noticed that the birds like to use cotton when building their nests, so she started hanging dispensers in nearby trees containing cotton laced with the insecticide permethrin, which is harmless for the birds. She aims to publish the results of her work next spring and has not revealed the effects of this “self-fumigation” technique. But one of her lab mates has spilt the beans on theornithologyblog.blogspot.co.uk: “Not only are the birds taking the cotton, the presence of permethrin-soaked cotton seems to dramatically reduce the number of Philornis larvae in the nest!”

This article appeared in Guardian Weekly, which incorporates material from Le Monde.