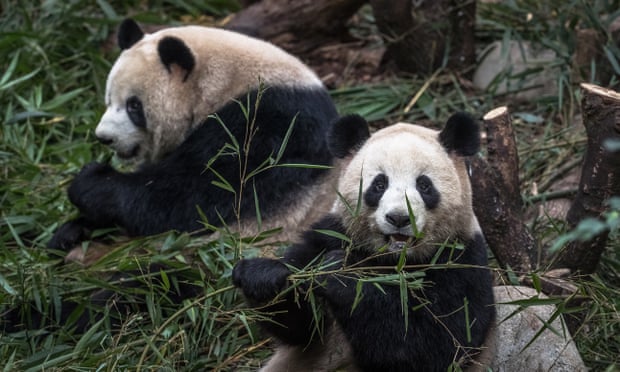 Giant pandas are no longer endangered in the wild, but they are still vulnerable with a population outside captivity of 1,800, Chinese officials have said after years of conservation efforts.

The head of the environment ministry’s department of nature and ecology conservation, Cui Shuhong, said the reclassification was the result of “improved living conditions and China’s efforts in keeping their habitats integrated”.

He said the announcement reflected China’s national efforts to preserve biodiversity in recent years. The authorities have worked to expand giant pandas’ habitats and replanted bamboo forests to feed them.

The number of Siberian tigers, amur leopards, Asian elephants and crested ibis have also “visibly increased” as a result of continuing conservation efforts in recent years, Cui told a press conference this week.

The decision by China’s own conservation authority comes five years after the International Union for Conservation of Nature (IUCN) removed giant pandas from its endangered species list and classified them as vulnerable.

Many Chinese experts disputed the decision at the time, arguing that it was misleading and would cause complacency in China, where the animals are considered a national treasure. They have been used as a part of Beijing’s international diplomacy since the 1950s.

This week’s announcement was met with delight on social media. Related hashtags on Weibo have been read nearly 10m times.

“Wonderful, wonderful news,” said one post. “It shows all the efforts have been paid off. Well done.” Another urged China’s conservationists to continue their work. “It’s a good start indeed, but there are still threats to these species. Do not relax.”

Observers say the issue of conservation also ties into Beijing’s diplomacy in recent months. The foreign ministry spokesperson, Wang Wenbin, said on Thursday that “the concept that lush mountains and clear water are worth their weight in gold and silver has taken root among the public in China.

“We stand ready to work with all sides to strengthen international cooperation in ecological preservation and environmental management to jointly,” he said.

Pandas, however, still face long-term threats. IUCN has said climate change could destroy more than 35% of their bamboo habitat in the next 80 years.

This article by Vincent Ni was first published by The Guardian on 9 July 2021. Lead Image: Giant pandas feed at the Chengdu breeding centre in in Sichuan province. Photograph: Roman Pilipey/EPA.