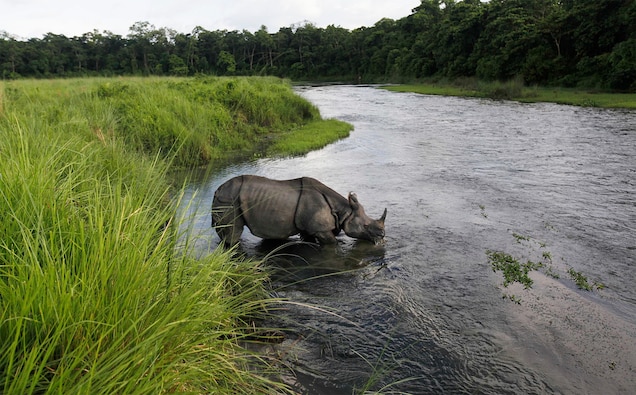 On World Wildlife Day, March 3, Nepal celebrated 365 days with zero poaching. No rhinos, tigers, or elephants were killed. It’s the second year of such success in Nepal. In 2011 the country also had none, and in 2012 it lost just one rhino to poaching.

This achievement is particularly notable in the face of increased poaching elsewhere. Since February 28, according to press reports, Kenya lost three rhinos to poachers in the span of one week in heavily guarded Lake Nakuru National Park, and one more in Maasai Mara Game Reserve.

On February 28 in South Africa, the epicenter of the rhino poaching crisis, tourists in Kruger National Park found a blinded and mutilated rhino wandering alive. That horror prompted a social media storm and generated intense interest from the Belgian ambassador to South Africa and senior members of the European Parliament. (The personal secretary and aide to Belgium’s deputy prime minister was one of the tourists.) In South Africa last year, 1004 rhinos were poached; so far this year, 146 have been poached.

Against this backdrop, Nepal’s record stands out.

According to John Scanlon, secretary-general of the Convention on International Trade in Endangered Species of Wild Fauna and Flora (CITES), Nepal’s success is the result of “strong and committed leadership, excellent national collaboration among enforcement entities and with parks agencies, very effective engagement with local communities, and targeted intelligence-led enforcement actions leading to arrests of key players at the top of the criminal chain.”

More than 700 criminals were arrested for wildlife-related crimes this past year, including many “kingpins.”

“Efforts on the ground have been intensified, with rangers and the Nepal[ese] army patrolling protected areas with support from community-based antipoaching units outside the parks,” notes Shubash Lohani, deputy director of the Eastern Himalaya Ecoregion Program at the World Wildlife Fund (WWF).

“In addition, active enforcement by the crime investigation bureau of Nepal’s police has been crucial to breaking down the presence of illegal wildlife trafficking networks.”

A joint operation in October 2013 by the Nepalese army and the special police led to the dismantling of a rhino poaching network and the arrest of Kathmandu-based kingpin Buddhi Bahadur Praja. Praja allegedly ran a cross-border smuggling enterprise from Nepal to Tibet and killed 12 rhinos over six years.

Also in December 2013, at Nepal’s request INTERPOL issued a Red Notice for another notorious rhino poacher, Rajkumar Praja, a 30-year-old Nepali wanted for killing 15 rhinos in Chitwan National Park. Praja was sentenced in absentia to 15 years in prison.

“There is very much a zero-tolerance attitude to wildlife crime, whereby justice is often swift and harsh,” notes John Sellar, an antismuggling, fraud, and organized crime consultant and former CITES enforcement chief.

“Nepal’s forest law empowers district forest officers and chief wildlife wardens to deal with offenders and impose prison sentences of up to 14 or 15 years,” according to Sellar.

“Whilst this scenario might seem at odds with other judicial systems,” Sellar says, “probably its greatest advantage is that it means that any poacher who is caught can expect to be dealt with much quicker than in other countries suffering high levels of poaching, where court systems regularly have lengthy backlogs and where, currently, insufficient deterrence is present.”

Thanks to Nepal’s efforts, its current estimated population of tigers in national parks increased from 121 in 2009 to 198 in 2013, a promising uptick for a species that’s in desperate trouble globally.

The Nepalese army patrols the national parks to ensure their protection. But poaching increased during the Maoist insurgency from 1996 to 2006, when soldiers were redeployed and the number of army monitoring posts in and around the park fell from 30 to 7.

Today, according to BBC reports, at least a thousand Nepalese soldiers patrol Chitwan from more than 40 posts.

At the national level, Nepal’s Department of Forests, the country’s Department of National Parks and Wildlife Conservation (DNPWC) antipoaching staff, and the Nepalese army all share information and work together to fight wildlife poaching and trafficking. At the local level, communities provide the DNPWC with information, which allows officials to target poachers and dealers.

“There has been collaboration across the board in Nepal to stop poaching by putting more rangers on the ground in a cohesive, sophisticated way, actively enforcing anti-trafficking laws to break down illegal wildlife trade networks, educating local communities, and building a shared ethic of conservation across Nepali society,” says WWF’s Lohani.

For years Nepal has ensured local communities benefit financially from the parks and ecotourism. Those benefits come not only from employment, but also from sharing revenue, such as entrance fees and license fees for tour and lodge companies, with local people.

“The government actually gives 50 cents of every tourist dollar to local communities, which makes them hold more value for rhinos alive than dead,” Lohani notes.

Further, Nepalese nongovernmental organizations (NGOs), such as the National Trust for Nature Conservation, and international NGOs, such as WWF, have a long history of fruitful interaction with local communities. The result is citizens with a strong sense of ownership and commitment to wildlife protection.

In addition, Nepal was a major force in the early days of the Global Tiger Initiative, which assists the 13 tiger range states in carrying out their conservation strategies through planning, coordination, and communication.

Nepal’s location—between China to its north and India to its south, east, and west—places it at great risk for trafficking. The country’s rough terrain makes border control difficult, and Kathmandu Valley is believed to be a major transit point for the illicit wildlife trade.

“Unfortunately, the harsh reality is that Nepal’s growing tiger and rhino populations will inevitably continue to be targets,” Sellar warns. “Personally, my concern would be that we see the South Africa scenario replicated—i.e., heavily armed and determined foreign gangs entering Nepal’s national parks in search of horns, skins, and ivory.”

But Nepal is aware of the dangers. Already, it has sought to employ the Wildlife and Forest Crime Analytic Toolkit and collaborate with the International Consortium on Combating Wildlife Crime (ICCWC) to strengthen its approach to wildlife crime.

As Klairoong Poonpon, former chair of INTERPOL’s Wildlife Crime Working Group and senior technical officer of Thailand’s Department of National Parks, summarizes, “Nepal’s remarkable achievement at zero poaching for a second year gives lessons for other countries and hope for the future of our wildlife.”