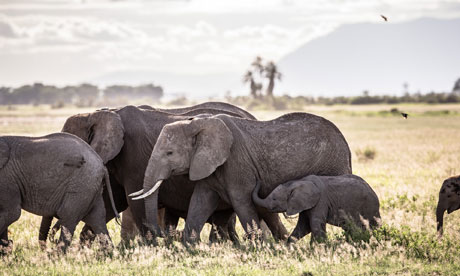 Conservationist Marc Goss touches “take off” on his iPad 3, sending a $300 AR Drone whirring into the air – his latest weapon to fight elephant poachers around Kenya’s Maasai Mara National Reserve. “It’s an arms race,” said Goss, whose green khaki clothing shields him from thorny acacia branches in the 30,000 hectares (74,132 acres) of savanna he protects. “We’re seeing larger numbers of poachers.”

Besides the almost 2 foot-long drone, Goss and other conservationists are using night-vision goggles and Google Earth to halt the decline of Kenya’s wildlife, which helps attract $1bn a year in tourism. With elephant ivory sold for as much as $1,000 a kilogram in Hong Kong, Kenya is facing its most serious threat from poaching in almost a quarter of a century, according to the United Nations.

At least 232 elephants have been killed in the year to the end of September, adding to 384 last year from a population of 40,000. Demand for illicit ivory from expanding economies such as China and Thailand has doubled since 2007, according to the UN Environment Programme.

Goss’s patch borders the Maasai Mara National Reserve, where semi-nomadic tribesmen, known as the Maasai, wearing checked-red robes herd their cows. On a warm morning he squints through the bush at a tusk-less elephant carcass, surrounded by 10 of its grieving family members in the hills above the village of Aitong.

‘Drones are a future of conservation’

“It’s pretty grim,” Goss, a 28-year-old Kenyan who manages the Mara Elephant Project, said as he stood 50 metres (55 yards) from the carcass. “It’s an elephant without a face. It’ll be eaten by hyenas now.”

Poachers had speared the pachyderm in her back. Its ivory would be worth more than $8,000 in Asia. The carcass was the third found in four days, an unusually high number, Goss said. One was shot with an automatic rifle and the other animal was also pierced.

When he started using the drones, Goss thought they would help mainly with providing aerial footage of the landscape and tracking poachers armed with rifles and the Maasai who sometimes killed the animals when they interfere with the grazing of their cows. He soon discovered they could help by frightening the elephants, keeping them out of harm’s way.

Drones can do the work of 50 rangers

“We realised very quickly that the elephants hated the sound of them,” said Goss, whose week-old beard goes white near his temples. “I’m assuming that they think it’s a swarm of bees.”

Goss and his team have put collars with global positioning system devices on 15 elephants so they can be tracked on a computer overlaying their paths on Google Earth. That way the animals, who have names such as Madde, after Goss’s wife, Fred, Hugo and Polaris, can be followed to see if they’ve strayed into areas at risk of poaching or human conflict.

Goss hopes to buy 10 more drones and to modify them by adding a mechanism that releases capsaicin, the active component in chili pepper, when elephants stray near dangerous areas. Paint balls loaded with chili pepper are being used in Zambia’s lower Zambezi region to deter elephants from high-risk zones.

“Drones are basically the future of conservation; a drone can do what 50 rangers can do,” said James Hardy, a fourth-generation Kenyan and manager of the Mara North Conservancy. “It’s going to reach a point where drones are on the forefront of poaching. At night time we could use it to pick up heat signatures of poachers, maybe a dead elephant if we’re quick enough.”

East Africa is a key battleground against the poaching of elephants, whose numbers in Africa are estimated between 419,000 and 650,000, according to the 178-nation Convention on International Trade in Endangered Species of Wild Fauna and Flora, better known as Cites.

Kenya is proposing stiffer penalties for the slaughter of elephants and rhinos, with fines of as much as 10m Kenyan shillings ($117,000) and 15-year jail terms. The government has deployed paramilitary forces and plans to acquire drones to fight poaching.

The development of new towns and urban sprawl in Kenya is intensifying the conflict between humans and elephants. The UN says the country’s population has more than doubled to about 43.2 million people in the past two decades.

“Kenya very soon will have to make some tough decisions on how to manage the elephant population because they will be at high levels of human-elephant conflict,” said Matthew Lewis, senior programme officer of the WWF’s African species conservation programme.

Across the Maasai Mara, which means spotted land in Swahili, Calvin Cottar uses a €86,000 ($116,000) gyrocopter to enforce land agreements he made with neighboring Maasai communities. His camp, part of Cheli & Peacock’s safari lodge portfolio, is built on plots he leases from the Maasai for $45 to $50 an acre. As part of the deal they won’t graze their cattle on areas that Cottar is trying to conserve.

“A big issue we have is night-time surveillance,” he said. “I can’t use the gyro at night so we’ll probably resort to using these drones.”

Later, Cottar sits at a wooden table where a member of the Kenya Wildlife Service recounts the previous evening’s close call. With his G3 rifle leaning against a concrete wall, the ranger eats a lunch of rice and beans as he tells Cottar that he thinks an elephant was shot and wounded for its ivory.

The rangers are planning a night-time operation nearby. Anti-poaching forces only fire on illegal hunters if they have guns, said Cottar, who runs a 1920s colonial-style safari camp with his wife Louise.

“It could have been poachers, so now we’re setting a trap for them,” said Cottar, who hunted game in Tanzania in the 1980s. “If they see someone with a gun, those rangers will shoot them. If they’re without a gun, they’ll chase them.”

This article was written by Bloomberg for the Guardian.

much much sad, please respect and responsible animal alive, stop and end cruel for elephants trade , no Ivory trade and circus. thank you