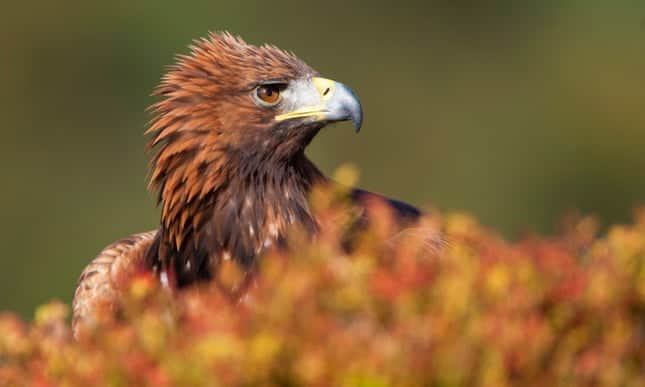 A nest of arm-sized sticks built on a precipitous crag by an octogenarian conservationist dangling from a rope has enticed a pair of golden eagles back to the Highlands of Scotland.

The eyrie handmade by Roy Dennis, a renowned conservationist who has masterminded the revival of endangered species across Britain, helped the eagles successfully fledge the first chick on Trees for Life’s Dundreggan estate in 40 years.

A team of volunteers on the rewilded estate between Loch Ness and Skye hauled large sticks to a remote cliff high on the hills where the remnants of an old nest had been spotted. Secured with a safety rope, Dennis climbed down to a ledge where he wove the sticks together.

Golden eagles are very sensitive to disturbance, so the conservationists knew it might take some time. Five years on, when Trees for Life’s Dundreggan manager, Doug Gilbert, checked the artificial nest this spring, he found it had been extended by the eagles, who had built “a vast structure” on top.

“This is a rewilding success story beyond our wildest dreams,” said Gilbert. “I’ve been checking the eyrie regularly since we built it in 2015, hoping to see evidence that the eagles had returned, and now they have. As golden eagles may use their nesting sites for generations, we’re hoping they are back for the long term.”

The golden eagle, Britain’s second largest bird of prey after the white-tailed eagle, was driven to extinction in England and Wales in the mid-1800s after centuries of persecution.

The bird has been making a slow recovery in Scotland but continues to be threatened by illegal persecution, with eagles shot or poisoned.

According to Stuart Benn, a member of the Highland Raptor Study Group, golden eagles are “undergoing a marked expansion in the Highlands, recolonising ground they haven’t been on for many years and even colonising some completely new areas.”

The birds may have been helped at Dundreggan by burgeoning numbers of black grouse – a favoured prey – after the restoration of waist-high “montane” tree species such as dwarf birch and downy willow. Trees for Life has been rewilding the 10,000-acre former deer-stalking estate since 2008.

This article was first published by The Guardian on 13 August 2020. Lead Image: Golden eagles have been making a slow recovery in Scotland after being driven to extinction nearly two centuries ago. Photograph: Alamy.