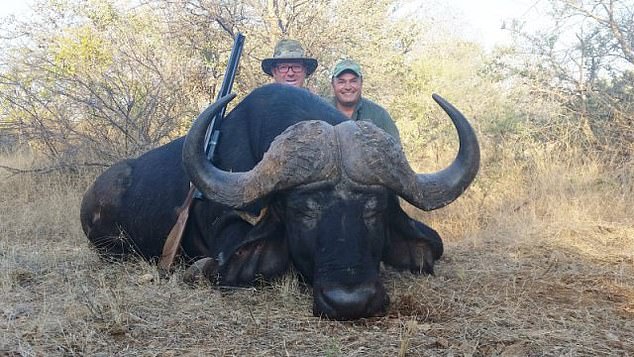 Stalking through the savannah, Andrew Broggio was on the trail of a Cape buffalo — one of the ‘Big Five’ African game alongside lion, elephant, rhino and leopard.

His team, including a driver and a tracker looking for footprints and droppings, had set off at 7am, when it was still cool enough to spend hours in the sub-Saharan bush.

Suddenly, at a distance of around 200 yards, they spotted the colossal beast.

Using a set of shooting sticks to steady his rifle, Mr Broggio eyed the scope, aiming for a ‘heart-lung’ shot behind the left shoulder which is intended to ensure instantaneous death.

The first shot failed to fell the buffalo, which can weigh up to a ton. A second, close-range bullet finished it off, and the animal went down.

Finally, the all-important photograph. Blood was wiped from the corpse, its limbs were rearranged and its face turned towards the camera, ready for a smiling Mr Broggio to pose with it.

Mr Broggio, 50, is the managing director of a Wiltshire-based firm which supplies the NHS with swabs, laboratory equipment and testing strips. He is one of a growing number of Britons who before the pandemic hit were heading abroad to kill exotic animals on ‘trophy-hunting’ expeditions, which may appal animal lovers but are entirely legal.

Most of the trips combine hunting with luxury — five-star lodges, fireside barbecue feasts, unlimited alcohol — and arrangements for the dead animals to be skinned, preserved and stuffed so they can be shipped back to take pride of place in the tourists’ homes.

Many of the animals targeted by the trophy hunters are under threat. Cape buffalo, for example, were classed as ‘near threatened’ on a list of endangered species by the International Union for Conservation of Nature in 2019, and with less than 400,000 in the world they number fewer than the African elephant (although, to be fair, Mr Broggio shot his beast five years earlier).

Yet the prospect of an end to lockdown means the trophy-hunting industry is gearing up again amid claims there are bountiful opportunities to kill animals because fewer have been shot during the pandemic.

Last month, Carl Knight a professional hunter from Epsom, Surrey, who now runs Take Aim Safaris in South Africa, sent out an email newsletter to 3,000 clients across the globe encouraging them to travel and take part in the blood sport.

‘Big elephant and trophy buffalo + hippo, croc are plentiful,’ he wrote in the email. ‘The areas are well rested, the animal movement is fantastic.’

And just before Christmas, Shropshire-based hunting-tour operator Mike Taylor promoted ‘special offers’ including cut-price ‘elephant bull hunts available in Namibia . . . when the travel ban has lifted. Discounted price $35,000 (£26,000), normally $45,000 (£33,000).’ One of the companies he offered packages with — Ndumo Hunting Safaris — shows clients on its website alongside dead cheetahs and leopards.

Umlilo Safaris, the South African company Mr Broggio had chosen to hunt with, closed during the pandemic but recently posted online that ‘as soon as flights to South Africa re-open, we will start hunting again’. It is expanding its premises and constructing a new hunting lodge to open later this year.

Mr Broggio travelled from his home in rural Devon to hunt the buffalo and paid up to £8,000 for the privilege.

He lives with his wife Hannah, 47, and their three teenage children in a sprawling, whitewashed cob-and-stone farmhouse.

Mr Broggio drives a classic blue Morgan convertible, and the family are well-known in the area, according to neighbours. The Broggios are thought to have bought a number of farms and created a large shooting estate, where they employ a gamekeeper who rears pheasants for other shoots. In 2019 they donated a 50-bird shooting day on their land for a rugby club’s charity auction.

Mrs Broggio is the company secretary of Medical Wire & Equipment Ltd (MWE), the firm her husband runs, as well as a champion racehorse owner whose thoroughbreds compete in point-to-point races which raise money for local hunts.

Although he was photographed with the Cape buffalo kill back in 2014, he has hunted a number of animals including wildebeest and antelope, and remains involved with the global trophy-hunting community. The full extent of his trophy collection remains unknown, but one room at his home features the heads of a springbok and an African oryx.

When approached for comment about his enthusiasm for trophy hunting, he declined to speak to the Mail.

The couple are Life Members of the Dallas Safari Club — the world’s largest hunting advocacy group, based in the gun-toting Texan oil town, which hosts the ‘Greatest Hunters Convention on the Planet’. It has ‘chapters’ worldwide, including in Britain.

‘Life Member’ couples pay £1,290 to attend the annual five-day convention and auction — which was held online for the first time last month. Exhibitors sold trips where 320 types of animals, including hippos, polar bears and pumas, could be hunted.

A trip to tranquillise a black rhino — one of only 5,000 left in the world — was auctioned off for £18,300, while a pair of £50 elephant-skin earrings and a £36 hippo-hide necklace were also available.

All told, the event netted the club more than £2.5 million, which will be used to further the aims of the organisation which says it is ‘dedicated to worldwide conservation of wildlife and wild places, promotion of sport hunting and fishing, and promoting outdoor education’.

And this brings us to one of the core arguments of the trophy-hunting lobby: that the money raised from the industry is vital to help conservation efforts. One report last year claimed that trophy hunting contributes £140 million to economies across Africa every year.

Proponents argue this money is more important than ever given that the fall-off in tourist revenue across the continent during the pandemic has meant cuts in anti-poaching patrols and other conservation efforts on game reserves.

The Dallas Safari Club and other hunting groups such as Safari Club International and Conservation Force insist that hunting is a key tool in animal conservation. They claim that in certain circumstances culling is necessary to manage animal numbers and that money spent on trophy hunts goes towards helping impoverished African communities.

The Dallas Safari Club even has an awards scheme, with its top prize, the ‘World Conservation Hunting Award’, given to a hunter who has shot about 400 animals.

But animal-rights groups accuse them of hiding behind the conservation claim in order to continue ‘an archaic, cruel, immoral sport which deserves to be in the history books’.

‘If it’s so good for conservation, why are species who are trophy-hunted seeing their populations plummet?’ asks Eduardo Goncalves, founder of Campaign To Ban Trophy Hunting, whose forthcoming book Making A Killing details the exploits of Andrew Broggio and others like him.

‘People who go trophy-hunting in Africa don’t do it because of conservation or because they want to help poor people’, he adds. ‘If they wanted to, they could give the huge amounts of money they splash out on killing animals for fun directly to [these causes] instead.’

The World Wildlife Fund appears to agree. In July last year, it rescinded its support of trophy hunting, having previously accepted it.

Yet Mr Broggio is merely one of dozens of British trophy hunters who travel abroad to shoot exotic creatures. Another is Abigail Day, a Cambridge-educated lawyer who has won awards for shooting more than 200 animals, and founded the London chapter of Safari Club International. She won the club’s ‘Diana’ award — named after the mythical goddess of hunting — as their top female hunter.

Then there’s Asif Wattoo, a customer service manager for Thames Water who lives in Slough, Berkshire, and regularly posts images on Facebook of himself posing with his rifle beside dead animals.

Meanwhile, Paul Roberts, who owns J Roberts and Sons Gunmakers in West Sussex and features on a list of more than 500 of the world’s most notorious hunters, has previously claimed his trophy-hunting hobby is so addictive it is like ‘mainlining on heroin’.

But the killing sprees — or at least, the importation of the ‘trophies’ — could soon be halted.

The Conservatives pledged to abolish the sport in their 2019 manifesto, while Boris Johnson has promised to ‘end this barbaric practice’.

And last year, on the fifth anniversary of the death of Cecil the lion — who was shot in Zimbabwe to global uproar by U.S. dentist Walter Palmer — nearly 70 cross-party MPs and peers demanded action ‘without delay’.

Added impetus for change will no doubt have come from Mr Johnson’s fiancee Carrie Symonds, a passionate campaigner on animal welfare.

And now, following a public consultation by Defra (Department for Environment, Food and Rural Affairs) last year, there are suggestions that there could be a partial or even comprehensive ban on the import of animal trophies introduced via the Animal Welfare (Sentencing) Bill currently passing slowly through the Commons.

One draft amendment puts forward the notion that an animal carcass should be permitted to the UK as a trophy if there is ‘some conservation benefit shown’ from shooting it.

The clamour for tighter restrictions on trophy hunting is certainly growing. For while we may view our transatlantic cousins as a trigger-happy nation built upon the ‘right to bear arms’, even America’s laws are stricter than Britain’s.

At present it is legal for a Briton to go on a trophy safari trip and bring back a leopard for taxidermy and mounting, while an American cannot take such an animal across the U.S. border.

Opponents of trophy hunting say the UK’s laws need to catch up. And they point out that, of all the animals currently being hunted for trophies, conservationists are most worried about the fate of the lion.

The official estimate of their numbers in the wild is just 20,000, while some groups estimate this total has fallen as low as 10,000, and the U.S. government has warned that the lion could be extinct in the wild by 2050. Campaigners agree, arguing we are on the cusp of witnessing the first big-cat extinction since the sabre-toothed tiger in the prehistoric era.

In trophy-hunting countries such as Tanzania, Zambia and Zimbabwe, almost all the lions shot are wild. In South Africa, however, out of the average of 1,000 lions shot every year, only around one per cent are wild.

That is because ‘canned lions’ — lions bred in captivity in order to be shot — are a thriving part of South Africa’s large game industry. With these animals, a successful kill is all but guaranteed, unlike hunts in the wild.

Some argue that ‘canned lions’ contribute to conservation by preserving wild numbers. But groups like the Dallas Safari Club are opposed to canned lions, saying that ‘the practice is not consistent with the definition of responsible, sustainable, fair chase hunting’.

In a joint statement with the International Union For Conservation Of Nature, they say that ‘the shooting of lions bred in captivity damages the reputation of all hunters’.

Many, however, argue that the reputation of trophy hunters is already damaged beyond repair — and the only solution is to ban them from enjoying their sport.

This article was first published by The Daily Mail on 5 March 2021. Lead Image: Target: Andrew Broggio with the buffalo he shot. He is the managing director of a Wiltshire-based firm which supplies the NHS with swabs, laboratory equipment and testing strips.