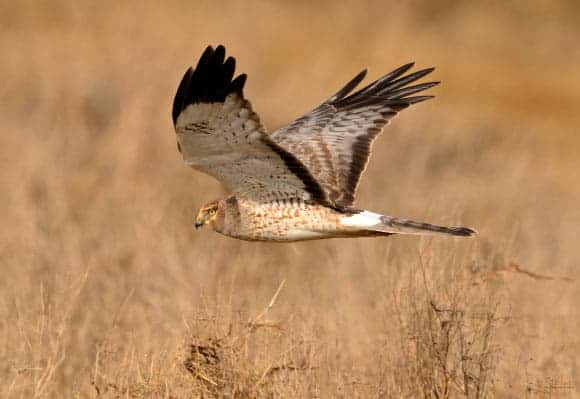 New research confirms that the hen harrier (Circus cyaneus), a medium-sized bird of prey found in parts of North America and Eurasia, is two different species of bird that are only distantly related.

The study, led by Dr. Graham Etherington of the University of California’s Museum of Vertebrate Zoology and the Earlham Institute, explores the phylogenetic relationship between two currently recognized forms, the Palearctic form C. c. cyaneus (hen harrier), and the Nearctic form C. c. hudsonius (northern harrier), to distinguish their ancestry and evolution.

“Molecular phylogenetics was applied to the hen harriers and the northern harriers to see if genetics could shed some light on whether the accepted morphological nuances between the species indeed represent a genuine distinction,” Dr. Etherington said.

“From a conservation point, our work shows the Palearctic form is not the same as the Nearctic form and should receive appropriate recognition and protection,” Dr. Etherington said.

“Before the advent of sequencing technology, species were categorized by shared and divergent morphological features,” he noted.

“However, new technology allows us to quantify the amount of genetic change between populations and identify divergent lineages.”

In the research, Dr. Etherington and his colleague, Dr. Jason Mobley from the Museum of Vertebrate Zoology at the University of California, Berkeley, collected tissue samples from museums around the world.

Using both DNA sequencing and morphology, along with differences in plumage, breeding biology, vocalization, habitat, distribution, dispersal and migration, it was possible to show the differences between the two forms.

This research is published in the journal Avian Research.

This article was first published by Sci-News.com on 24 Nov 2016.