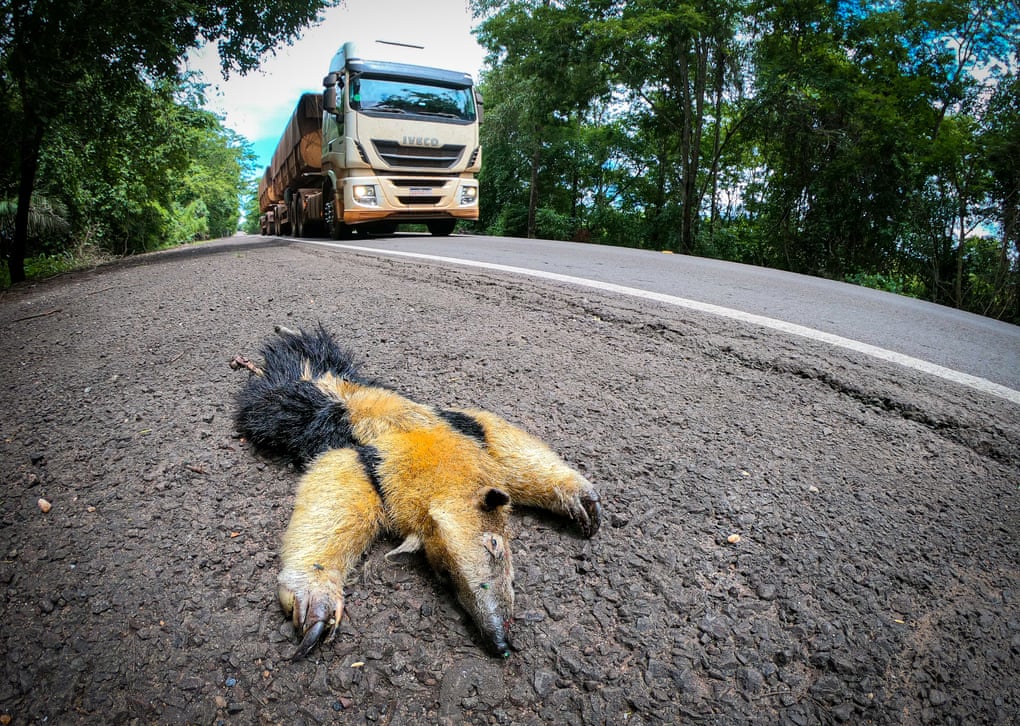 The last time Schwartz’s tracking monitor registered his location, he was standing at the edge of the “highway of death”. A massive male giant anteater, he was roaming his habitat in the Brazilian Cerrado – a vast tropical savanna that neighbours the world’s largest tropical wetland, the Pantanal – when he disappeared next to the federal highway officially known as the BR-262. No more GPS datapoints, collected every 20 minutes, were recorded.

But biologists and veterinarians from the Institute for the Conservation of Wild Animals’ (ICAS) Anteaters and Highways Project, who had placed the collar on him, were sure of what happened.

The driver who hit Schwartz probably didn’t see him until it was too late. It was night-time, and Schwartz’s dark colouring and eyes that wouldn’t have reflected the headlights of oncoming vehicles would have made it almost impossible to avoid him. The impact on his body was most likely so great that the tracking collar broke, and researchers think he dragged himself away from the road to die. The team searched for him, but he was never found.

Schwartz is thought to be one of thousands of animals killed in wildlife-vehicle collisions every year on the highway of death. It is one of the many roads that cut across Brazil’s fauna-rich ecosystems without taking into account the animals that live alongside. The BR-262 was built in the 1960s, long before environmental impact regulations came into being in 1986 – and effective measures to prevent accidents on the road still haven’t been put into place. Now, decades after its construction, a class action lawsuit has forced authorities to open their eyes to the dangers of the road for both wildlife and humans.

The BR-262 stretches east-west across the states of Espírito Santo, Minas Gerais, São Paulo and Mato Grosso do Sul, cutting straight through the Atlantic Forest, the Cerrado and the Pantanal.

The most lethal stretch is the near-300km that runs through the Pantanal between the cities of Aquidauana and Corumbá on the Bolivian border, where lorries are numerous and mining for metals is rampant. According to research from the Federal University of Mato Grosso do Sul, more than 3,000 animals die in collisions on the road every year, affecting as many as 88 different species.

In 2020, the Pantanal experienced its worst drought in 47 years – with the damage made worse by the fires that overtook the wetland – leaving its main source of water, the Paraguay River, at levels so low that many ships meant to carry mining cargo had to remain docked.

“The low level of the river has forced mining companies to start sending shipments by road,” says Gustavo Figueirôa, a biologist studying wildlife-vehicle collisions with the nonprofit organisation SOS Pantanal, “so the flux of trucks on the highway has increased”.

The fires also added to the number of wildlife deaths by pushing more wildlife to cross the road, and by causing poor visibility leading to more collisions.

Highway BR-262 is now one of many old roads being reviewed as part of a partnership between the ministries of the environment and infrastructure to understand how to lessen their impact on the environment. Experts say some of the best tools to keep animals off the road are aerial, terrestrial and arboreal fauna passages, built with the specifications of the region’s wildlife in mind and using strategically placed fencing to guide animals to the passages for safe crossing.

The fencing is very low. Capybaras and anteaters break it, coatis climb it, armadillos dig under it and deer jump it
Fernanda Abra, ViaFauna

According to Fernanda Abra, a biologist specialising in the ecology of roads, and cofounder of environmental consultancy firm ViaFauna, there are several spots along the BR-262 where attempts to keep animals off the road have been made, but they are inefficient and inadequate.

“It’s fencing that is not extensive enough, that’s very low,” she says. “Capybaras and anteaters break it, coatis climb it, armadillos dig under it and deer jump it.”

She and the rest of the ViaFauna team started monitoring wildlife-vehicle collisions on the BR-262 between Aquidauana and Corumbá in December 2020, after a 2018 class action lawsuit brought against the National Department of Transport Infrastructure (DNIT) demanded better measures be taken to protect the area’s wildlife.

According to the Federal Prosecutor’s Office in Mato Grosso do Sul, DNIT had previously attempted to implement measures to lower the rate of animal deaths along the stretch of highway, such as installing speed traps and signs at critical points, but these weren’t enough.

Fencing that both blocks animals from gaining access to the road and guides them to safe passages should be DNIT’s top priority, according to the Federal Prosecutor’s Office, which lists specific stretches of road where those changes are required.

Luiz Guilherme Rodrigues de Mello, director of the DNIT, says the department was aware of the problem on the BR-262 and other highways like it, but that it was the lawsuit that made them sit up and take notice of its severity.

“Fortunately, the Federal Prosecutor’s Office assisted us with this, and opened our eyes to a situation that is critical, and that we need to look into so that we can do better,” he says.

The lawsuit led to DNIT’s contract with ViaFauna, providing funding for the team to monitor the stretch of highway for a year. Abra says a final report, which will include a detailed explanation of the most efficient mitigation methods, should be ready by December 2021 or January 2022. As an expert, she is involved in three other similar lawsuits, including one in the state of Goiás that was won this February.

Both she and other specialists want people to understand that wildlife-vehicle collisions can be just as dangerous for humans as they are for the animals crossing the roads, and can come with a significant monetary cost when vehicles and surrounding infrastructure are damaged.

A study that Abra conducted in São Paulo showed that an average of 3,000 collisions in the state every year are caused by wildlife, leading to the deaths of 22 people. Attending to those accidents costs the state 56m Brazilian reais (£7.5m).

Another study, coauthored by Abra and members of the Anteaters and Highways Project, concluded that the average material cost during wildlife-vehicle collisions on 1,158km of highway in Mato Grosso do Sul with animals weighing more than 1kg was $885 (£650) per incident, with 5% causing total vehicle loss. In the three-year period studied, the total estimated cost was between $4,455,730 and $5,645,009.

Investments in proper mitigation methods, they say, would easily be paid back by the number of accidents they would prevent.

While animals such as the crab-eating fox, the yellow armadillo and the nine-banded armadillo are among the most killed in wildlife-vehicle collisions along the BR-262, their stable numbers mean the impact is less severe than it is on those with populations already in decline, such as the giant anteater, which tends to cross roads at night, when it is most active and when 80-90% of wildlife-vehicle collisions happen. It also has a long and slow reproductive cycle, giving birth to one pup at a time. According to Arnaud Desbiez, a biologist and coordinator of the Anteaters and Highways Project, the data the team collected shows that roads have had a huge impact on the animal’s population.

“Vehicle collisions are not directly causing local extinctions,” he says. “But they’re reducing the population growth rate by half, meaning the animals have less capacity to recuperate from other threats, such as fire, poisoning by agrochemicals, dog attacks and habitat loss.”

While the BR-262 gets the most attention, others can be just as lethal, Desbiez says. Another federally-run highway, the BR-267, was equally as deadly for giant anteaters monitored in Desbiez’s project. There is also ‘tapir highway’, the state-run MS-040, so-called because it has the highest number of collisions with lowland tapirs, another species vulnerable to extinction and with a declining population.

Back at the DNIT, Rodrigues de Mello says another highway that is a cause for concern is the BR-319, which runs through the Amazon, connecting the state capitals Manaus and Porto Velho. The department is already working with ViaFauna to improve the safety of the road and expects changes to be implemented this year.

At ICAS, Desbiez and the rest of the team continue to monitor giant anteaters while also moving on to other phases of the project, such as focusing on the human dimension of the problem. Their plan includes training road workers, making lorry drivers part of the solution with an app to document animal sightings, working with companies to reduce night-time driving, changing mindsets and reintroducing orphaned giant anteaters into the wild.

They hope education, teamwork and using the term wildlife-vehicle collision as opposed to roadkill will create a shift in culture and a change in policy.

“This is not just a biodiversity issue,” says Desbiez. “This is a human safety issue. People are dying on our roads.”

This article was first published by The Guardian on 26 May 2021. Lead Image: A dead anteater on the ‘highway of death’, the BR-262, which is the deadliest roadway for wildlife in Brazil. Photograph: Gustavo Figueirôa/SOS Pantanal.