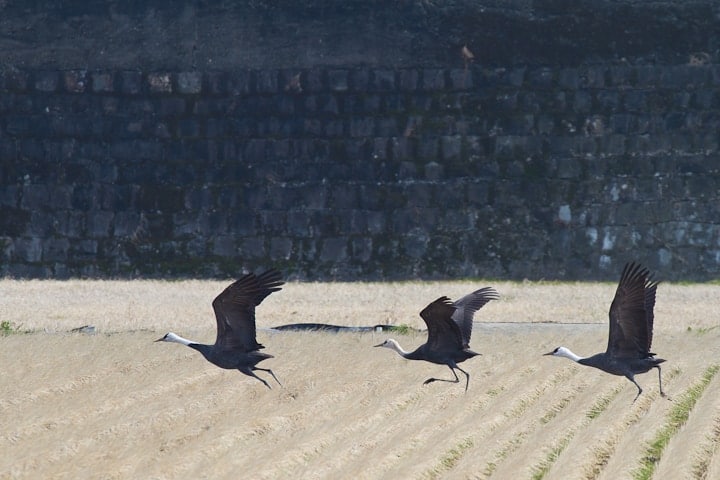 It’s the beginning of spring, and the first of Japan’s wintering species are beginning the long journey back to their breeding grounds in the Russian Far East. I am talking about the vulnerable Hooded Crane (Grus monacha), which together with smaller numbers of White-naped Crane (Grus vipio), are now passing over my part of Japan in increasingly larger flocks.

Usually the cranes will stay out among the wetland reeds while on migration, so I was lucky to locate this family of Hooded Crane and even more fortunate to be able to watch them at such a close distance.

Hooded Crane have one of the most restricted ranges of any crane species, which may in part account for their “vulnerable” status and puts them alongside White-naped, Siberian and Red-crowned (Japanese) cranes as those species most at risk from hunting, habitat loss and disease. They are also one of the smallest cranes; a similar size to a Grey Heron at between 91 and 100 centimetres. Adults are mostly dark grey with a white neck and head, black forehead and reddish-black forecrown. Juveniles lack the black and reddish-black areas of the adults, and have a yellowish neck and head instead of white. Normally Hooded Crane have only one offspring per year, so wintering family units usually comprise two adults and one juvenile. On migration these cranes are instantly recognisable by their loud, distinctive call, which unmistakably alerts all to their presence whether they happen to be flying overhead or feeding on the ground. Indeed, the wintering flocks of thousands are one of the noisiest gatherings of avifauna one is ever likely to encounter!

Over eighty percent of the world’s Hooded Crane population winters in the Arasaki area of Izumi city in Kagoshima, Japan. On spring migration they can travel to their breeding grounds via a few different routes depending on the weather conditions, one of which takes them up along the coast of the Ariake Sea, over Isahaya, Omura, Sasebo, Tsushima Island and then reaching the Korean Peninsula. From there they make their way to different regions of northern continental East Asia such as Lake Baikal, Amur, Ussuriland, Lena and Yakutia, where they split up into smaller groups for breeding.

Being one of the first of Japan’s wintering visitors to head back to their summer breeding grounds, the first sight of Hooded Crane starting to move through my area brings with it a sense of excitement and anticipation. This signals the beginning of perhaps the most interesting time for birding in Japan – the spring migration season that runs from March through to the end of May. But with this excitement and anticipation comes a hint of sadness as I realise it will not be until November that I next have a chance to observe these stately, magnificent birds.

Interested in birding Japan? Check out www.johnandrewwright.com for photos and information on the different species you can see at different locations and times of year, as well as details on guiding services. Feel free to contact me regarding itineraries for any time of year – I specialise in getting visiting birders and wildlife photographers the best possible views of the species they are seeking!