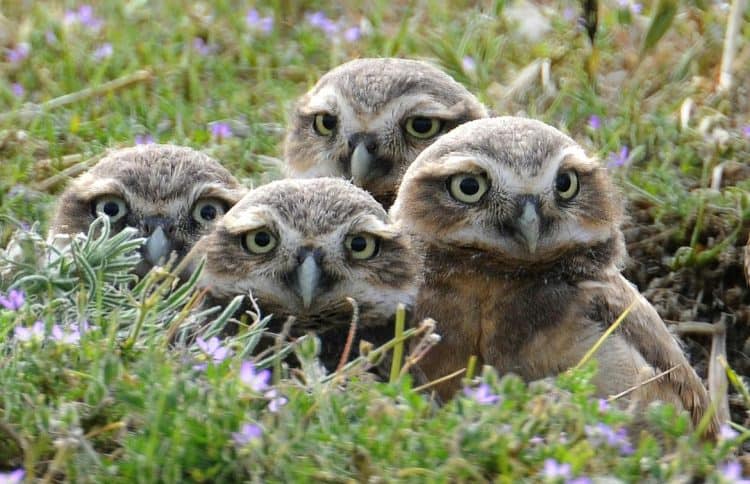 If you’ve taken off on a flight from Los Angeles International Airport recently, you’d probably never guess that a few hundred feet below you, just beyond the runway’s end, is the winter habitat for 10 rare burrowing owls.

It seems like an unlikely spot for wildlife to thrive. The LAX Dunes Preserve is located in the sandy ruins of a neighborhood just west of the airport and east of the Pacific Ocean. About 800 houses there were razed in the 1960s when louder passenger jets began using the airport. The noise may have been too much for humans, but it apparently doesn’t bother the burrowing owls.

In fact, this location may be ideal for them. According to the Cornell Lab of Ornithology, these raptors live in open, treeless, gently sloping areas with sparse vegetation. The owls can be found in grasslands and deserts—as well as on golf courses, road embankments and airport medians.

Because burrowing owls are considered endangered in Minnesota and Canada, threatened in Colorado and Mexico, and a species of concern in California and several other states, scientists were extremely happy to discover 10 of them doing well at the LAX Dunes Preserve.

“This is very exciting — a real stunner,” Pete Bloom, a biologist and avian expert, told the Los Angeles Times, which reports that this is the largest number of the owls seen there in 40 years. The number will soon grow, as two owls were observed guarding a nest.

Bloom called the small preserve “priceless coastal real estate” for the owls, because there’s nowhere else left for them to go in Los Angeles. Most of the dunes that once existed along the California coast have been destroyed due to development.

How are the owls managing to thrive in such an unusual place?

Wildlife experts say one reason is that owls are an example of nature’s resilience.They also credit the LAX Dunes Preserve’s restoration program, which is considered to be one of the most successful in Southern California, according to the L.A. Times.

Five years ago, this area was a ghost town of abandoned streets, sidewalks, structure foundations and non-native invasive plants. Now, six acres have been regraded and seeded with native plant species, thanks to the efforts of Los Angeles World Airports, the nonprofit Bay Foundation and their partners, and thousands of volunteers.

The restoration area, which is closed to the public, has been “transformed from impervious roads and other cement and asphalt surfaces into a thriving native, vegetated dune community,” the Bay Foundation reported in July 2018.

Biologists are hoping that the young burrowing owls will make the LAX Dunes Preserve their permanent, year-round home. The owls won’t be alone there. The preserve is also home to thousands of federally endangered El Segundo blue butterflies, several federally protected California gnat catcher birds and 900 other species of animals and plants.

Scientists hope to introduce even more species to the preserve. “For biologists, the preserve has become an ecological hot spot sandwiched between a popular beach and the third-busiest airport in the nation,” Robert Fisher, a U.S. Geological Survey biologist, told the L.A. Times. “We aim to make sure things stay that way.”

To find out more about the LAX Dunes Preserve, visit the Bay Foundation website.