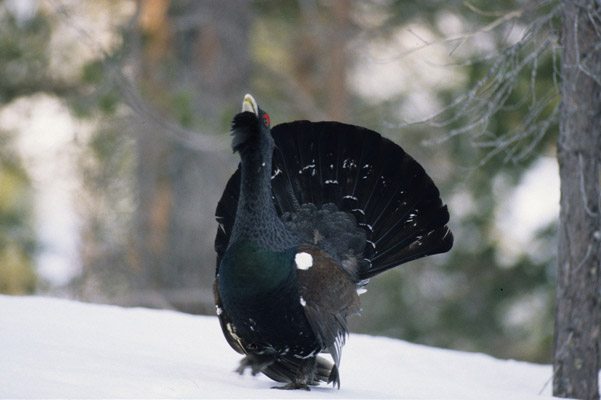 Surprising clatter cuts through the silence in the snowy forest shortly before sunrise. The powerful clicking sounds like a dropping Ping-Pong ball before culminating in a loud pop resembling the opening of a champagne bottle. This sound is heard clearly and far. Propped on a thick pine tree branch, with a peacock-fanned tale, relaxed wings and head pointing skyward, a western capercaillie is singing. The song terminates with a low-frequency sound similar to scraping a fork to the bottom of a frying pan. It’s exactly during those last few moments of singing that something unusual happens: the male bird goes temporarily deaf. Hence the species’ common name in Bulgarian—deaf bird.

Fifty meters from the bird stands a hunter, perfectly still. “One-two-three,” he counts mentally as he uses these short seconds to break his stillness and move three steps closer to the bird. This moment is the culmination of an emotional night: the hunter woke up at 2 am, travelled for several hours with a hunting guide into the forest, and around 5 am started listening for the song of the capercaillie. For hours he stands still and quiet awaiting the key moment—the last three seconds of the bird song. If he’s lucky, soon, taking three steps at a time, he might get close enough to the bird to squeeze the trigger.

“It’s not that beautiful, the capercaillie,” explains Vladimir Peykov, a local hunting guide, forest ranger and former hunter himself. “But trophy hunters love it because the stalking experience is unique. Some people even go through it without shooting it.”

The western capercaillie is an expensive and prestigious trophy—the price of a hunting permit is 1,000 Euro ($1,350) per bird. In addition to that, hunters pay for a hunting guide, jeep, accommodation, food. The real revenue for the locals exceeds thousands of euros—a serious financial incentive to protect the deaf birds’ display arenas in the forest. Although Bulgaria is one of the few countries with a stable population of capercaillies, the species is in decline. Fewer than 2,000 males still live in the old growth pine forests in Bulgarian mountains. Deaf birds are in the “Endangered” category according to the Bulgarian Red List mainly because they are progressively losing their habitat to unregulated logging. The most significant opportunity for conservation of this charismatic species and the forests it inhabits may lie in the collaboration with Bulgarian hunting associations interested in its continued existence.

The Latin name of the western capercaillie is Tetrao uroballus. In the past, Bulgarian folk tales used to call it “mountain cock” but now it’s always referred to as “deaf bird.” The two genders are very different: males are the size of a large turkey, 3-4 times larger than the females and with a lot more flamboyant plumage. During the mating season—April to early May—the cocks gather at the display grounds (also known as leks) and compete with their mating calls for the attention of females. The birds always select a clearing in the forest surrounded by old trees, usually with Southeast exposure, so that sunrise will hit it directly. The same leks are used over many generations of capercaillies. At night the cocks perch high on the branches of the trees and start singing just before sunrise. Gradually they hop down from branch to branch, eventually ending up in a clearing on the ground. The calling contest frequently escalates into a physical fight amongst the competitors. “They fan their tails, dance around, peck, duel—lots of ruckus,” Peykov says.

Meanwhile, the females observe from the branches of nearby trees. The idea is that the hen will select the largest and most suitable candidate to father her chicks based on his singing ability. When they determine the winner, the females land on the ground, surround him and start quacking. A successful male may conclude his singing with 10 or 15 female mates. As long as nobody interrupts them, copulation continues until 10 am. This is the most important day in the life of a male capercaillie. The competition for this opportunity is ruthless. The mating period—and along with it the chance to father offspring—lasts only a couple weeks. After that, the females separate from the males to lay eggs and avoid any contact with them until the following year.

In the winter, the adult deaf birds graze the leaves of the pine trees. Consequently, their meat smells like resin and is unsuitable for human consumption. In the summer they eat leaves, buds and other vegetation from the forest. But their favorite food is heathberry. Heathberry bushes hold an essential role in the life of capercaillies: the hens hunt for insects and caterpillars there to feed to their chicks. According to Stefan Avramov, expert on endangered species at Bulgarian Foundation ‘Biodiversity’, this is likely part of the reason why western capercaillies “insist on” living only in centennial forests—younger ones do not have that many heathberry bushes. Another theory is that younger pine and spruce forests do not offer branches thick enough to sustain the weight of an adult male deaf bird.

“The problem is that their trees are getting cut down, frequently due to ignorance. There is mass forest clearing in Bulgaria. Automatic saws are everywhere,” complains Peykov. In the past, Bulgaria was covered with old growth forests. They were called Magna Silva Bulgarica by the crusaders crossing the country. Forest clearing for pastures began in the Middle Ages during the Ottoman Empire rule. It continued during the past century for industrial timber extraction. Thanks to sound forest management, lots of centennial forests are now protected in about a dozen reserves and national parks; but these protected territories comprise only a small portion of the country. According to WWF-Bulgaria, less than 5% of the forests outside national parks are old growth. Most of them are in so-called ‘closed pools’—inaccessible mountainous regions where forest roads are missing and timber extraction is difficult or impossible. For now, lack of roads is the only thing that protects these forests.

“Sooner or later the national forestry agency will find the money [to develop the remaining untouched forest],” Avramov says. “What will happen then?”

Forestry departments throughout the country cut a certain amount of trees each year. First, the forest ranger goes through the area and marks the trees scheduled for removal. Following him, the cutters come through and slash them. According to the regulation for managing forest resources, capercaillie display and dueling grounds should be avoided. But if the ranger is unaware that a certain forest clearing surrounded by tall old trees is a lek, it will be destroyed.

“Everything depends on the regional forestry director—whether he’s a hunter and is aware,” Peykov, the guide, says.

To counter the threat to the deaf birds’ home and help protect the species, Bulgarian conservation NGOs have been collaborating in the past five years with Bulgarian hunters. The idea is to map the leks in the entire country in a central database for the national forestry agency. This will reduce the clear-cutting of old-growth forest and encourage deaf bird conservation. “For now, though, all it is just a good idea,” says Peykov.

Every year 50-100 capercaillie cocks—fewer than 5% of the population—are shot for trophies in Bulgaria. This legal hunting does not endanger the species, according to hunters, because females are never killed and they do not require that many males for fertilization. Most recreational hunters who can afford a western capercaillie trophy come from Spain and Italy.

Meanwhile, Bulgarian hunters continue working on the other problem threatening deaf birds in Bulgaria—poaching. Theoretically, there is a small chance that a detailed mapping could reveal the exact location of the leks to poachers, but as Peykov explains: “Ah, don’t worry; the poachers already know where they are anyways.” There are two kinds of poachers, he explains. The first are locals who, after downing two glasses of Bulgarian brandy at dinner decide to go into the forest and shoot a deer or anything that crosses their headlights. “We know each other,” says Peykov, “but we have difficulties catching them cause they don’t have a regular schedule!”

The others are “rich boys from the city,” who can’t be bothered with applying for hunting permits. Even if they get caught and the ranger gives them a ticket, they just make a few phone calls and the charges are dropped. “We are afraid [of] following up on them,” says Peykov. “They are too well connected.”

But the work of the hunting guides and forest rangers has a positive impact on the struggle against illegal hunting. Lots of poachers decide against going into the forest illegally because they are aware of the guides’ presence. “The shot can be heard far and we can swiftly react,” says Peykov.

In addition, about two years ago Peykov installed an experimental electronic surveillance system with photo-traps. He hung small cameras automatically triggered by movement at key locations in the forest: leks, forest roads etc. They send pictures of people and cars (with license plate numbers) directly to his cell phone. “When we get a picture of a man with a riffle in the early morning hours, it’s clear what he’s up to.”

The system is effective. So far Peykov and his colleagues have caught and fined 15 poachers in one region alone. They issue them tickets for ‘illegal hunting’ or ‘moving with a weapon through a game area’ in the case when they catch them before shooting an animal. So far they haven’t caught anybody poaching deaf birds, but presumably this surveillance system will help protect this valuable natural resource.

In addition to installing surveillance cameras, conservationists like Peykov are encouraging people to stalk the deaf bird with cameras. “Whether you will shoot or photograph it,” Peykov says, “you need to posses the same skill to approach it.” A few years ago, he himself abandoned his riffle for a digital camera. “The more I learned about these birds, the less desire I had to kill them,” he says.

Bulgaria is a popular destination for tourists. Photographers come from England or France and pay 70 euro for a guide to drive them by jeep to the display and mating areas. The local hunting associations also organize tourist observations of brown bears and chamois, which are some of the other charismatic inhabitants in the old growth forests. In Finland, the revenues from wildlife and photo tourism totaled 4.2 million euro in 2007 and in 2012 exceeded 10 million euro. Hunters and environmentalists hope that the deaf bird will make the region even more popular with tourists, ensuring the survival of this remarkable bird and its home.