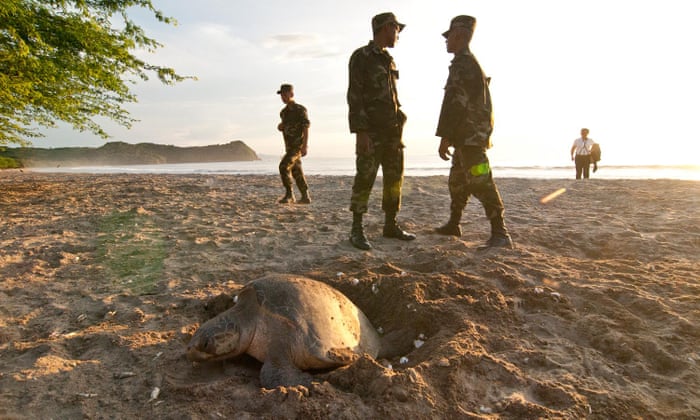 Sometimes life really does imitate art. In the fourth season of the hit TV show, Breaking Bad, police put GPS devices on barrels of methylamine to try and track the show’s protagonists to their meth lab. Inspired by the episode, Kim Williams-Guillen, a conservationist with Paso Pacifico, decided to take the concept one step further: what if you could catch wildlife poachers by slipping GPS devices into convincingly faked wildlife parts? In this case: Hollywood-inspired, high-tech sea turtle eggs; fake eggs so convincingly crafted that poachers would have a hard time distinguishing them from the real thing.

“Every year millions of sea turtle eggs are taken by poachers for sale on the black market. Paso Pacifico’s solution has the potential to reveal the trade routes and destination markets for trafficked sea turtle eggs,” the U.S. Agency for International Development (USAID) said.

Out of control poaching

Paso Pacifico, which works in Central America’s Pacific region, plans to test their fake eggs first on the beaches of Nicaragua, where Williams-Guillen described the poaching of sea turtle nests as “uncontrolled, unregulated, extensive and contested.”

The situation is so bad that even the best-protected beaches are plundered to some extent and it’s not uncommon to see poachers digging up nests just meters from tourists watching sea turtles laying their clutch at night, according to Williams-Guillen. This poaching becomes particularly frenzied when olive ridley sea turtles show up for the arribadas (a Spanish word meaning “arrival”). These are mass laying events where thousands of olive ridleys nest on the same beach for a single night in a biological strategy to overwhelm natural predators.

“Even with armed guards, the numbers of poachers overwhelm military personnel by ten or twenty to one,” Williams-Guillen said. “Although many poachers are locals with limited resources, during these arribadas there are influxes of gangs of poachers from larger cities outside local communities.”

She added, “these are not necessarily just local poor people without other options.”

Humans have been eating sea turtle eggs (and killing adults for meat) for millennia. However, as human population exploded and as sea turtles began to face additional threats such as bycatch in fisheries, beach development, light pollution and climate change, sea turtle populations declined precipitously. Today, all but one of the world’s seven sea turtles are considered threatened by the IUCN Red List. And the one that’s not – the flatback turtle – is listed as data deficient, which means scientists simply don’t know how it’s doing. Worse still, the species hasn’t been assessed for two decades.

For its part, Nicaragua is home to four sea turtle species: the olive ridley, the leatherback, the green and the critically endangered Hawksbill sea turtle.

But to protect the country’s sea turtles, Williams-Guillen said conservationists shouldn’t just depend on law enforcement on beaches catching low-level operators who do the risky grunt work.

“If one poacher decides to stop, another one will just step into his place….we need to know more about the middlemen and people higher up in the distribution chain,” she said and then referenced another hit TV show, The Wire, “We’re trying to find Stringer Bell, not Wallace.”

That’s where the fake turtle eggs come in.

Crafting convincing sea turtle eggs is more difficult than one might expect and Paso Pacifico is still working on perfecting a prototype. The appearance is the easy part, according to Williams-Guillen, since sea turtle eggs “look like ping pong balls.” But getting the texture right is proving quite problematic.

Sea turtle eggs are not covered in a hard shell like bird’s eggs, but are “slightly squishy with a thin, rigid, but not brittle, shell,” said Williams-Guillen. To get that somewhat flexible – almost rubbery – feel, Paso Pacifico brought in Lauren Wilde, a special effects and make-up artist in Los Angeles.

“We are still in the stage of all working together to make it come together, and my role is the outer shell,” said Wilde, who has considerable experience with faking nature through sculpting animal heads for her company, Wilde Animals.

First, Wilde had to get her hands on the real thing.

“I really needed to feel an egg, feel the weight, feel how flexible the shell,” she said. Since it’s illegal to send sea turtle eggs over the border, Wilde is depending on freshwater turtle eggs from California.

“Even though the turtle was a land turtle, the eggs are very similar to the sea turtles eggs. So it was really eye opening and important for me to feel these eggs and how the shell bends a little,” she said. Wilde is now working on sculpting a mould for the outer shell “that will hopefully look and feel realistic after being painted.”

To get the GPS device inside, Paso Pacifico is employing 3D printers to make a plastic ball with space for a GPS transmitter. This ball will then take the place of the embryo inside the plastic shell. Lastly the fake shells will be sealed with liquid silicone, waterproofing them.

Sea turtles on lay average around 100 eggs in a nest, so once the fake eggs are finished they will slipped in with the real ones. Williams-Guillen said it might even be possible to deliver fake eggs into nests while poachers are at work. Wary of tourists, poachers will often back off if strangers come near and then return when they have gone.

“It would be pretty easy to drop an egg in the dark into a nest they have been digging up,” she said.

Once the poacher picks up the cuckoo’s egg along with the hundred or so real ones, conservationists and law enforcement will be able to track where they go.

Experts believe most of the stolen eggs eventually make their way out of Nicaragua, possibly to El Salvador or Guatemala. However, there is also growing concern that sea turtle eggs from Central America are actually heading to China.

“There is increased commerce and movement between China and Nicaragua over the last few years, as China increases its presence in Central America,” Williams-Guillen said. “Recently a couple was caught smuggling turtle eggs from Mexico to the United States, and it is believed that some of those may have been destined for Asia.”

If sea turtle eggs are indeed heading from Central America to Asia that could mean a huge new market for illegal poachers – making the trade that much more difficult to combat.

To date, Paso Pacifico has yet to put a single fake egg in a nest. But, Williams-Guillen said she isn’t too concerned that media on their project will result in poachers looking for the eggs.

“The vast majority of the poaching is happening at night, so already it is hard to tell [the eggs] apart, and at this point, poachers and middlemen are not closely inspecting eggs, but rather shoving them into a sack as quickly as possible. Once these things are covered with sand, it’s damn hard to tell them apart.”

Of course, poachers will eventually become aware of the prospect of fake eggs among the real ones – especially when customers try to bite into an egg and break their teeth on the GPS transmitter instead. So, Paso Pacifico plans to do a massive deployment of as many fakes as possible to gather a lot of data before poachers get wise.

Knowing where the poached eggs go will allow conservationists and law enforcement to put limited resources – whether it be awareness-building campaigns or crackdowns on illegal seller – in the right place. Depending on the country’s laws, the fake eggs could even lead to arrests or stings, though the primary motive at this point is simply to discover where the eggs are being sold.

Paso Pacifico was one of sixteen winners in USAID’s Wildlife Crime Tech Challenge, and, in addition to the $10,000 reward, received expert advice and collaborations. And, once ready, Paso Pacifico hopes not only to deploy the technology in Nicaragua, but also to share it with interested parties around the world.

To that end, the USAID said winners will require further funding to implement their work.

This article was  first published by The Guardian on 26 Jul 2016.

Love the turtel egg plan. Nothing better than pulling the wool over a poacher and jailing him!!TeeHee