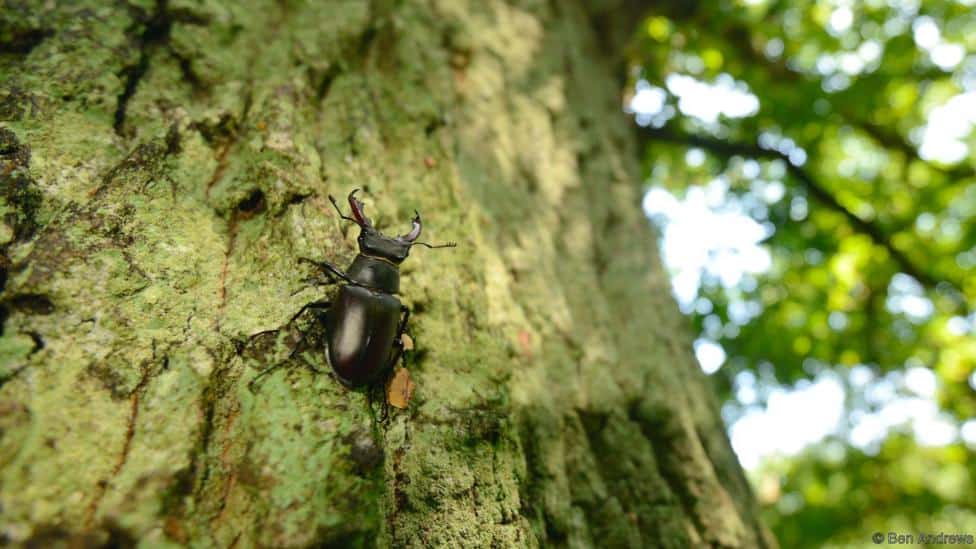 Humans have an enormous impact upon the planet, dramatically affecting natural ecosystems and wildlife habitats, with our industry, energy generation, and urbanisation changing how many species live.

While there is now greater emphasis being placed on sustainability, such as wildlife conservation and a focus on renewable energy sources, there are still problems we must address.

One such issue is the loss of habitat, with the stag beetle an example of a species that is threatened by this issue. Once prevalent across the woodlands of Europe, the stag beetle is now far more scarce, and is extinct in several parts of Europe and England.

Stag beetles are one of the UK’s most impressive insects, thanks to their size and the unusual jaws of the male beetle, which look like the antlers of a stag. Male stag beetles can grow up to 7 centimetres long, while the female is usually smaller at 3-5 cm.

Aside from their distinctive jaws, stag beetles are renowned for their chestnut brown wing cases and black thorax. This impressive beetle also has a long and fascinating life cycle, spending between three and seven years underground as a larvae, where they feed on rotting wood.

Once stag beetles emerge as adults, they only live for a few weeks during the summer months, which they spend searching for a mate and laying eggs.

How have stag beetles become threatened?

Because of their diet, stag beetles live in woodland areas, such as forests, orchards, parks and gardens. Thanks to the increase of urbanisation, much woodland was taken for expanding cities, dramatically reducing the stag beetle’s natural habitat.

As well as the development of urban areas, ‘tidying’ of woodlands and parks has previously included the removal of dead and decaying wood, removing the food source for stag beetle larvae.

In their short adult lives, many stag beetles are also unfortunately crushed underfoot by people, as they are attracted to the warmth of tarmac. Humans are not the only threat to stag beetles, which have various predators including cats, foxes, and birds, such as kestrels.

Helping to protect them

Unfortunately, many people kill stag beetles each year, assuming they are dangerous – but stag beetles are completely harmless. If you see stag beetles in a paved area you can safely move them by picking them up via the thorax. If you do pick up a stag beetle, try to move it as short a distance as you can.

For gardeners in the UK, it is not uncommon to dig up stag beetle larvae – if you do this, then put them back in the same place, or re-bury them in a safe shady spot with as much rotting wood as possible.

Stag beetles are an amazing insect that have been threatened by human interference – it’s important we do our best to help them thrive.