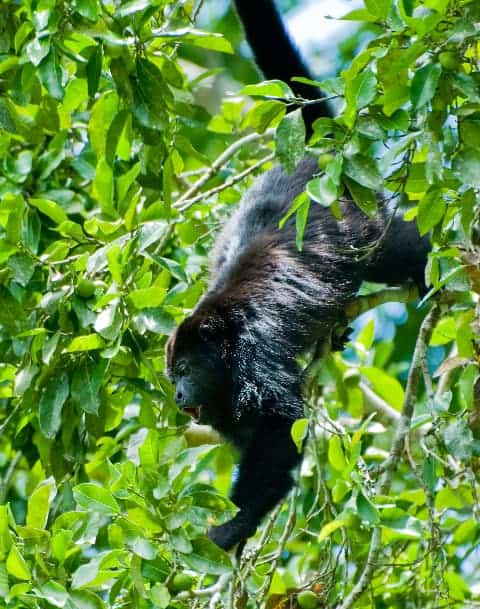 It was 4:00 AM and pitch dark outside when the low guttural scream started. I jerked awake thinking it must have been a dream. But, then the noise happened again only louder this time. It echoed through the trees and into my ears. It was like no sound I had heard before. There it was again, but this time from another direction and a bit farther away. Over the course of the next half hour, the dueling calls continued almost non-stop and it was amazing.

This was my first introduction to a Howler Monkey. In this case, they were Mantled Howler Monkeys. I have since made many trips to the rainforest but I have never grown tired of waking up to this wondrous natural alarm clock. In fact, I am disappointed on mornings when the howlers choose to sleep in and skip their morning territorial serenading.

Not only was the Mantled Howler Monkey the first primate I ever heard in the wild, it was also the first one I ever saw. The first encounter occurred the same day as the wakeup call. We actually made eye contact as the Howler Monkey climbed down a few branches to get a good look at me. I could see intelligence in its eyes which has had a lasting impact on me and helped fuel my desire to return to the rain forest.

As noisy as these large primates are they can also be incredibly quiet and hard to find. This is because they tend to stay in one place during the day and make very little noise outside of the morning and evening calls. On numerous occasions I have found myself standing right under a troop of howler monkeys without even realizing it.

This last photograph has a second species of monkey in it. Can you guess the species?

There are around a dozen species of Howler Monkeys throughout the new world. I have been lucky enough to photograph three of these species and hope to add to that list in the future. If you find yourself spending the night in the jungles of Central or South America do prepare yourself for the inevitable wake-up call really early in the morning.