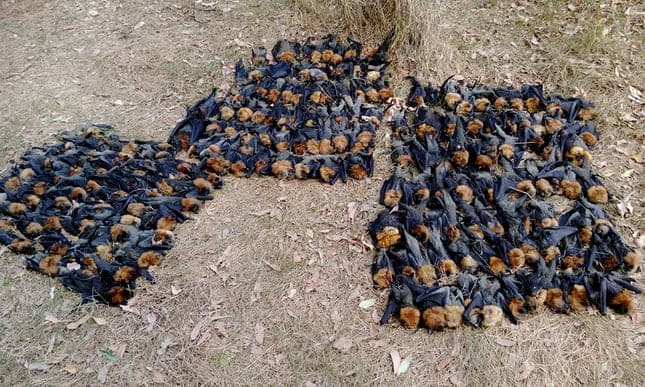 A colony of flying foxes has been nearly wiped out by extreme heat in Campbelltown in south-west Sydney, according to environmentalists.

The Help Save the Wildlife and Bushlands in Campbelltown campaign posted a series of images to Facebook showing the corpses of the animals lying in the ground, apparently after they had died from dehydration in the soaring temperatures.

The group say more than 400 of the animals were lost, many of them juveniles.

Volunteers have been working to save the animals, rehydrating them and taking them to places where they can be kept cool. Temperatures in Sydney reached a 80-year record high of 47.3C on Sunday.

Cate Ryan, one of the first volunteers on the scene, told media “it was unbelievable. I saw a lot of dead bats on the ground and others were close to the ground and dying. I have never seen anything like it before.”

The campaign group also regularly post information about why protecting the species is so important for the local habitat. “Flying foxes are intelligent and remarkable,” the group says. “These unique animals help regenerate our forests and keep ecosystems healthy through pollination and seed dispersal. They don’t use sonar like smaller, insect-eating bats; only their eyes and ears, like us. They see as well as a cat at night and are just about as smart. Flying foxes are foresters keeping the eco-system together. If we are to keep the remnants of our forests healthy, we need the flying foxes. The two are inseparable.”

The environmental campaign group have also been hosing down koalas to keep them cool.

This article was first published by The Guardian on 09 Jan 2018.