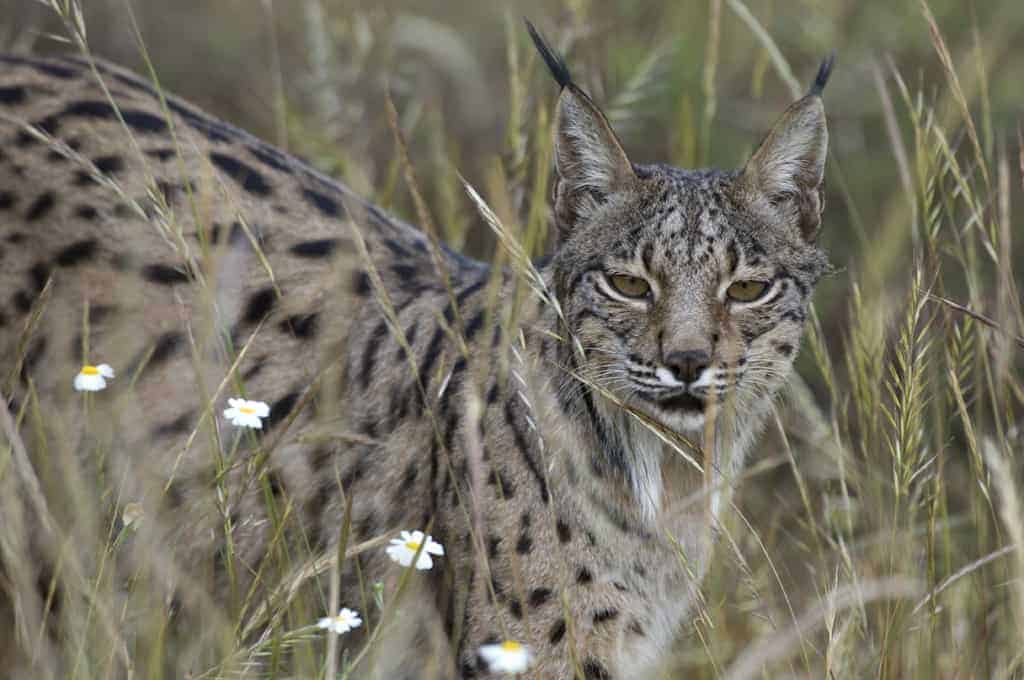 Excitement ripples through the crowd that has gathered to catch a rare glimpse of the world’s most endangered cat. With its lustrous, spotted coat, kohl-rimmed eyes and tufted ears, the Iberian lynx would not look out of place in Africa or Asia. But this is Europe’s big cat.

And the lynx that dozens of people have come out to see today could be the key to saving this species. The cat was once widespread across Spain and Portugal. But in 2005, its numbers plummeted to just 150, earning it the unenviable title of being the most threatened of the world’s 36 wild cat species. One of the key factors in this animal’s catastrophic decline was the loss of its main food source: rabbits, which were wiped out by disease.

Habitat destruction has also been a major problem for the lynx. The situation was so desperate that conservationists in Spain were forced to take radical action: removing some of the cats from the wild and putting them into captivity to breed, in an attempt to boost numbers.

Miguel Simon, director of the Lynx Life project, said: “The situation was really dramatic: there were only two populations left in the wild. “In order to preserve this species, we had to create a captive population in case the wild population became extinct.”

Understanding the reproductive behaviour of these shy and solitary cats has not been easy. But over the past five years, breeding centres in Jaen and the Donana National Park, both in Andalucia, have been extremely successful and there are now around 100 cats in captivity.

And in the wild, thanks to work to enhance the felines’ habitat, numbers are up too – the population has grown to 300 cats. With this double success, conservationists are ready to put the next part of their rescue plan into action: releasing captive-born lynx into the wild.

Dr Simon said: “The Iberian lynx is a key species in the Mediterranean ecosystem. It is a top predator, and if we preserve this species, we are preserving the whole ecosystem. “It is our heritage, and we have to preserve it for future generations.”

Lynx Life has carefully selected an area in Sierra Morena for the animals’ new home. The habitat is perfectly suited to the felines: it is a hilly, forested region, packed with shade for the cats to sleep in when the fierce Spanish Sun becomes unbearably hot.

Most importantly, though, there are plenty of rabbits – without them, the lynx cannot survive. Today, a large group of people have arrived to see how the cats respond to their new home. They are excited at the rare prospect of a positive news story for this beleaguered animal. Three young captive-born cats from La Olivilla breeding centre in Juan have been selected for the release.

The team from Lynx Life has given them a careful check-up, to ensure they are in good health. They have also been fitted with radio collars, allowing the conservationists to track their every move. Everything is riding on the success of today. If this goes well, the hope is that it will pull the Iberian lynx back from the brink of extinction.

As the cats are released, they are a little confused at first, unsure of their new surroundings. But after tentatively taking a few steps, they bound into the wild, ready to explore their new home.

Guillermo Lopez, a vet with the Lynx Life project, said: “Days like today, you feel incredible. This is the very first time a captive-bred individual has been released into the wild. “I am a bit scared because we don’t know what is going to happen with her. It is a big change from being in captivity, but we have to try.”

The Lynx Life team admits that radical intervention like this is a last resort. But if it works, these cats could be the first of many to roam free once again. A total of 15 releases have taken place this year, and if new populations begin to establish, more and more of the captive cats will be introduced to the wild.

Eventually, the conservationists would like to extend the scheme across Spain and Portugal. Dr Lopez said: “Just a few years ago, everything seemed so difficult, and now we are approaching the successful conservation of the species. “We are looking at the landscape, and thinking: ‘Yes, we can do it’.”

Donana relict population suffers from inbreeding; Andujar population territories overpopulated; young individuals leaving this area mostly vanish or refound as roadkills. Corridor between both population the ONLY solution to save the species from extinction in  the near future. Urgent but no money for that. European Union weren’t that clever  when supporting Spain in developing concrete deserts (high ways all over the country) in the late 80-ties and early 90-ties. Future still not bright for this magnificent mammal! Jan Kelchtermans http://www.europesbig5.com

What a wonderful story. Congratulations to the teams for all their patience and dedication. It will be marvellous to see such a beautiful animal in its natural habitat once again.  Eleanor Brown (Italy )