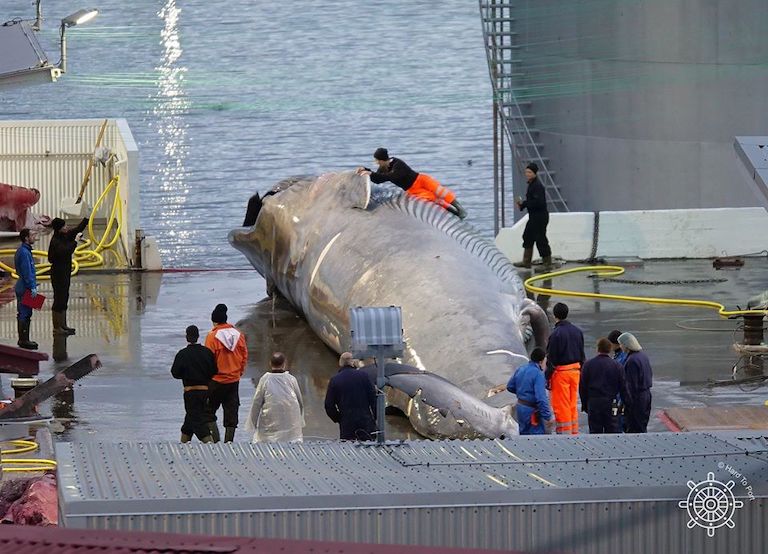 Icelandic whaling company IP-Utgerd announced April 24 that it is stopping whaling completely, while the country’s largest whaling firm, Hvalur hf., says it won’t be hunting any whales for the second year in a row.

IP-Utgerd, which mainly targeted minke whales (Balaenoptera acutorostrata), cited financial difficulties after no-fishing zones were extended off the Icelandic coast, forcing its boats to go further and further offshore. Hvalur, which hunts threatened fin whales (Balaenoptera physalus), is ceasing operations because of stiff competition with Japan, among other reasons, according to Kristján Loftsson, the company’s CEO.

In the past, Hvalur sold most of its whale meat to Japan, but Loftsson said Hvalur is not currently able to compete with Japan’s own whale meat products, which are subsidized by the Japanese government.

Loftsson also said Japan now has strict requirements for imported whale meat, which has made dealings with Japan even more difficult.

Additionally, Loftsson said the COVID-19 outbreak would make it impossible for his company to hunt whales and process the meat, since workers would need to be in close proximity to each other, and social distancing rules would be difficult to follow.

For conservationists, this interruption to whaling, however long it lasts, is welcome news.

“This is indeed terrific news that for a second straight year, vulnerable fin whales will get a reprieve from Hvalur hf.’s harpoons, the sole fin whaling company,” Fabienne McLellan, co-director of international relations at Ocean Care, told Mongabay.

“This said, fin whaling has been suspended in Iceland in the past, only to resume. While it looks promising that whaling in Iceland might stop for good, the temporary cessation of fin whaling must become permanent.”

“I believe the writing is on the wall now for the world’s most notorious whaler — Kristjan Loftsson — and his company Hvalur hf.,” Read told Mongabay. “Now is the time for Loftsson to hang up his harpoons and for Iceland to become an ethical whale watching, not whale killing nation.”

Hvalur has been whaling in Iceland since 1948, and it didn’t stop when the International Whaling Commission placed a global moratorium on commercial whaling in 1986. From 1948 to 1989, the company caught an average of 220 fin whales a year, according to a report by the Animal Welfare Institute.

In 2018, Hvalur killed 146 fin whales, many of which were pregnant females. Two whales also turned out to be hybrids between fin whales and blue whales (Balaenoptera musculus), which stirred a substantial amount of controversy.

Read said he believes the “intense scrutiny” Hvalur received after killing the hybrids may be another reason the company won’t whale this year.

Hvalur exports most of its whale meat to Japan, although some is sold within Iceland itself. However, whale meat isn’t very popular within the country, and a growing number of people do not support the industry, according to McLellan.

“Icealanders traditionally do not eat meat from fin whale,” she said. “A consumer survey conducted a few years ago showed that only 3% of Icelanders eat minke whale meat regularly, while 75% never eat whale meat.”

While conservationists say they hope Hvalur will hang up its harpoons for good, Arne Feuerhahn, founder of Hard to Port, a German organization working to end whaling in Iceland, says he’s not convinced that Hvalur is finished with whaling.

“We’re celebrating the moment that there’s not going to be any whaling, but we’re also aware of the possibility that they’re going to resume next year,” Feuerhahn told Mongbay. “We have to look at the past, and I know that with fin whaling, Iceland sometimes takes a pause for two years.

“It’s a family business and he [Kristján Loftsson] wants to keep it alive, so despite all the problems with the Japanese market, and the problems in Iceland with the [COVID-19] guidelines, he might come up with a solution for it, and we could go back to whaling in 2021,” Feuerhahn added.

Despite these reservations, Feuerhahn said he believes Loftsson could successfully convert Hvalur’s whaling facility into an educational center.

“He could make something really educational and lasting from it and … tell visitors and the Icelandic community about the history of whaling, and about his family business without killing whales anymore,” Feuerhahn said. “This has been done in the past in Australia. When Australia killed their last whale … the last whaling station in Albany, Australia, has been transformed into a museum. I think this could work very well in Iceland as well.”

This article by Elizabeth Claire Alberts was first published on Mongabay.com on 27 April 2020.