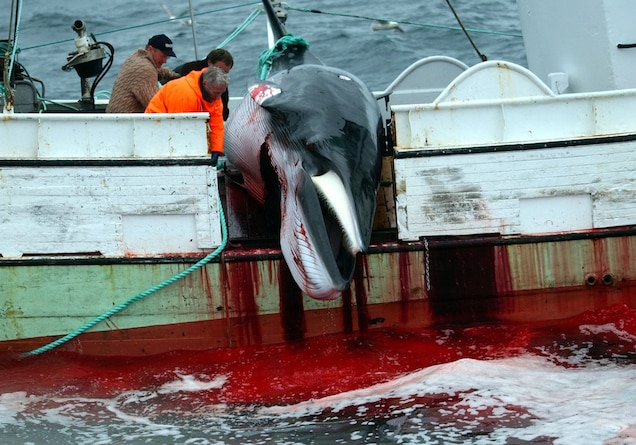 When it comes to commercial whaling, Japan is in the limelight. The country has been widely accused of using a scientific research program as a guise for hunting hundreds of whales a year and selling their meat. Last year, an international court agreed that the program isn’t scientific and ordered Japan to shut it down—to no avail.

But while Japan’s whaling program may be the most publicized, Japan isn’t the only nation hunting whales for commercial gain. Iceland does too. Along with Norway, the country openly defies a 1986 moratorium set by the International Whaling Commission (IWC), a voluntary body whose member nations agreed not to hunt medium and large whales for profit.

The solitary minke whale, which isn’t threatened with extinction, falls into this category. So does the endangered fin whale, also called the finback whale. But Icelandic whalers hunt them both anyway. This caught the attention of Jonny Zwick, a filmmaker based in California. His documentary Breach, released on Amazon Prime in November, explores the country’s commercial whaling industry.

How is it that Iceland can even hunt the animals? When the country wanted to rejoin the whaling commission in 2002 after a decade long hiatus, it included a clause in its reentry bid objecting to the commercial whaling ban. This “reservation” to the moratorium is what allows Iceland to whale commercially. Each year, the government sets what’s supposed to be sustainable kill numbers for minke and fin whales.

Breach from Kinonation on Vimeo.

Minke meat largely appeals to tourists who can order it at Icelandic restaurants. But meat from the endangered fin whale isn’t popular at all in Iceland, so it usually gets shipped to Japan—even though there’s not a big market there, either. International trade in fin whale is banned, but another “reservation” to that ban allows Iceland to ship whale meat to Japan.

The film shows that the whale meat business isn’t exactly lucrative, but that hasn’t stopped the country’s lone fin-whaling company, Hvalur, from trying to sell its product. The business has even incorporated whale into beer and luxury dog food, and in 2014 it was forced to take a long and circuitousroute to avoid European ports that blocked passage of its ships.

Intrigued by the film, I recently caught up with Zwick to discuss it. He spoke about how Icelanders feel about whaling, what shocked him most about the country’s whaling practices, and what he thinks of Hvalur’s director, Kristjan Loftsson.

My uncle is a marine biologist conservationist. He actually informed me about what was taking place in Iceland. I found it quite shocking that I’d never heard that endangered finback whales, the world’s second largest animal, were being slaughtered for commercial gain there. I decided to go and was pretty shocked by the access that I was granted—and decided that somebody needs to tell this story.

What kind of story did you want to tell?

I wanted to tell the story from the Icelanders’ point of view because obviously there are a lot of objections to whaling commercially around the world—what we’ve seen in protests in Japan—but I wanted to hear it firsthand from those involved and those who’ve been surrounded by it. When I found out that 52 percent of Icelanders still supported whaling in 2013, I really wanted to hear why.

How would you compare Iceland’s whaling industry with Japan’s or Norway’s, countries that also engage in commercial whaling?

Iceland is the only country in the world to hunt the endangered finback whale, which is very different from the commercial minke whaling that takes place in Norway and Japan. Because it’s a different species—it’s an endangered species.

Iceland’s minke whaling isn’t that prevalent, but Norway is killing a ton of minke whales off the radar, and Japan is completely under the spotlight, which is appropriate because they go down into the whale sanctuaries, and they kill thousands of whales as well, but they’re minke whales and they claim for it to be research. Norway and Iceland openly admit to it being commercial whale hunting, but no one seems to give it much attention.

As you filmed the documentary, what surprised you most?

The International Whaling Commission designated a scientific committee that spent a lot of time coming up with this number of 46 fin whales that would be established as a sustainable amount of whales that could be killed each season. The Icelandic government says that it’s adhering to the IWC regulations and rules, yet they have a quota of 154 for fin whales that can be killed every year. It was shocking to me that they’re getting away with this. They’re killing three times the amount that’s supposed to be sustainable.

Has the International Whaling Commission done anything to stop them?

A lot of NGOs and people who’ve been pushing for new legislation have almost given up on the IWC. They really don’t consider the IWC as a body that’s going to do anything about that, so they’re calling on specific governments, rather than even dealing with the IWC.

I was surprised that Iceland’s whaling industry pretty much comes down to one man, Kristjan Loftsson. What do you make of him?

He’s the son of the man who started Hvalur, this whaling company. And it’s really hard for him to let go, and he doesn’t want people telling him what to do with his heritage. At one point, it probably was profitable for Icelanders, for his company. But now it’s been proven as unprofitable, so his motives just become very obvious. And he just has this huge propaganda policy. He gets kids at a really young age to come and start working for him in the whaling stations, and he really tries to ingrain this nationalistic sentiment into them and get everybody on board with continuing his family practice.

The film shows the battle between the whaling and whale watching industries. Can you describe that dynamic?

The whale watching industry brought in about 300,000 people in Iceland last year alone, and Iceland’s entire population is 300,000. So this business is huge, and seeing a whale alive in the wild is more more valuable for somebody going to Iceland than trying it on their dinner plate. But then you have these tourists coming to Iceland, going whale watching, and then getting off the boat and actually trying this whale meat. When you get off the ships it’s advertised as an Icelandic tradition. So there’s just this weird dichotomy and there has to be education there.

So as you hoped, did you discover why Icelanders support whaling?

It’s a nationalistic thing. They gained independence in 1944, and they want to set their own rules. They consider whales their resources, and they don’t want people telling them what to do with their resources. And they get really heated about it, and they have pride about it.

What do you want this film to accomplish?

The majority of Icelanders may be in favor of whaling, but I believe that’s primarily because they haven’t received any education about whales in their surrounding waters and don’t understand that whaling is not enhancing their economy in any way but rather is hurting it. I want the film to be able to answer questions and educate people about the illegal whale hunting taking place in Iceland. They don’t call it illegal, but it is defiant, and they are breaking international law in the trade of endangered species.

This article was first published by National Geographic on 27 Jan 2016. Lead Image: Whalers haul a dead whale on a fishing boat off the west coast of Iceland. An objection to an international ban on commercial whaling allows the country to hunt minke and endangered fin whales. Photograph by Adam Butler, AP.