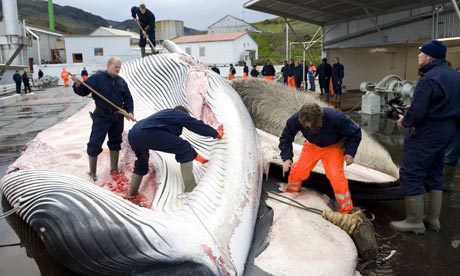 Last night, Hvalur 8 and 9, two whaling vessels owned by millionaire entrepreneur Kristjan Loftsson, left Reykjavik harbour in Iceland, bound on a north-westerly course for the open Atlantic. Hvalur 8 was last logged at 64 degrees latitude, 23 degrees longitude before it went out of range of commercially available data. Together with its sister ship, its mission is to resume the harpooning and killing of fin whales, the second largest animal (after the blue whale) on Earth.

For two years Iceland’s fin whale hunt has been suspended – but only because the economic market for whale meat, Japan, was suffering the after-effects of its cataclysmic earthquake. In the terrible logistics of global economics, the whale meat market is open for business again – partly, it is claimed, to provide luxury dog food snacks.

Iceland has set itself a quota of 184 fin whales, potentially to be killed over the next few months. Thankfully, that is an optimistic target on the hunters’ part. But the resumption of this cull raises once again deep political issues. Ironically, many Icelanders oppose whaling on economic grounds – the trade is bad for tourism, they say, since the whale-watching boats, which also operate out of Reykjavik, may find themselves witnessing the slaughter of the animals that their passengers have paid to see.

Conversely, Icelandic whalers – who killed their first minke whales of the season last month – have protested against new regulations forbidding them from operating in waters visited by the whale-watch boats – on the grounds that these are also the most fertile waters for their hunts. Meanwhile, the Whale and Dolphin Conservation charity claims that tourists are actually sustaining the whaling by eating whale meat in Icelandic restaurants, believing that they are taking part in an essential cultural expression of the island’s traditional diet.

This Alice-in-Wonderland situation is only exacerbated by Iceland’s current and pressing dilemma over whether it should join the EU – which would surely insist on new controls, if not a cessation, of whaling. However, strident noises made by the Obama administration in the US earlier this year – promising direct political action if the Icelandic fin-whale hunt went ahead – appears to have fizzled out.

Last night’s sailing ought to challenge all those imponderables with the visceral, imminent and present threat: of the death of endangered animals (as they are classified on the International Union for Conservation of Nature, IUCN, “red list”). Fin whales, despite their size, remain mysterious creatures. Even in the second decade of the 21st century, we do not know where they go to breed – although they are the loudest animals on Earth. A fin whale on one side of the Atlantic can be heard by another fin whale on the other side. Unfortunately, we don’t appear to be listening.

Until three years ago, we believed that fin whales lived to be less than 70 years old. But the necropsy of a stranded fin whale in Denmark – believed to be a juvenile – was found, in analysis, to be 140 years old. We know so little about these animals that whatever political, economical or environmental claims may or may not be made by humans in determining their fate, surely the basic fact of our own ignorance ought to count for something? Apparently not to Loftsson and his crew, currently sailing out into the Atlantic, bent on their bloody mission.

This article was written by Philip Hoare for the Guardian.co.uk