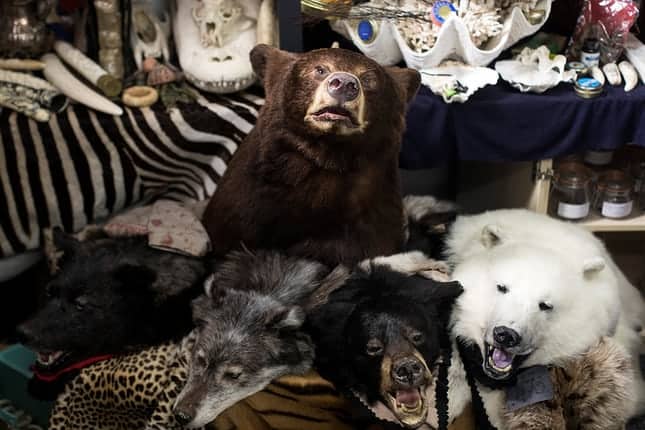 The online sale of endangered and threatened wildlife is rife across Europe, a new investigation has revealed, ranging from live cheetahs, orangutans and bears to ivory, polar bear skins and many live reptiles and birds.

They found more than 5,000 adverts offering to sell almost 12,000 items, worth $4m (£3m) in total. All the specimens were species in which trade is restricted or banned by the global Convention on the International Trade in Endangered Species.

Wildlife groups have worked with online marketplaces including eBay, Gumtree and Preloved to cut the trade and the results of the survey are an improvement compared to a previous Ifaw report in 2014. In March, 21 technology giants including Google, eBay, Etsy, Facebook and Instagram became part of the Global Coalition to End Wildlife Trafficking Online, and committed to bring the online illegal trade in threatened species down by 80% by 2020.

“It is great to see we are making really significant inroads into disrupting and dismantling the trade,” said Tania McCrea-Steele at Ifaw. “But the scale of the trade is still enormous.”

Almost 20% of the adverts were for ivory and while the number had dropped significantly in the UK and France, a surge was seen in Germany, where traders developed new code words to mask their sales. “It is a war of attrition and we can never let our guard down,” said McCrea-Steele. The UK is implementing a stricter ban on ivory sales and the EU is under pressure from African nations to follow suit.

Reptiles for the pet trade were the single biggest group, making up 37% of the adverts, with live turtles and tortoises being sold in large numbers. Endangered birds were also common, making up 31% of the adverts. Parrots were the most frequently advertised, but almost 500 owls and 350 birds of prey were also offered.

Most of the adverts of large, live animals were found in Russia, where big cats or bears are regarded by some as status symbols. Leopards, cheetahs and jaguars were all offered for sale in Russia, as were more than 130 live primates, including orangutans, lemurs and gibbons.

However, seven live primates were also found in UK adverts and one live bear advert was found in Germany. More commonly offered for sale in the UK were big cat skins from lions, tigers and leopards, as well as polar bear skins.

Some endangered species can be legally traded, for example if they are bred in captivity. But it is often difficult to tell which sales are legal, as few adverts provide sufficient information, such as certificate numbers. “The legal trade can serve as cover for the illegal trade,” warned McCrea-Steele.

The Ifaw researchers selected 327 of the adverts that appeared most clearly illegal and have shared the information with law enforcement authorities. McCrea-Steele said that online wildlife trading has become big business: “I have seen investigations where enforcers walk into a room of someone they have identified as trading online and they have floor-to-ceiling, wall-to-wall animal body parts – rooms of death, which are deeply disturbing.”

This article was first published by The Guardian on 23 May 2018.

Probably when everything goes extinct those hoarders will sell at a maximum price. Hate the mentality of this world !!!!!