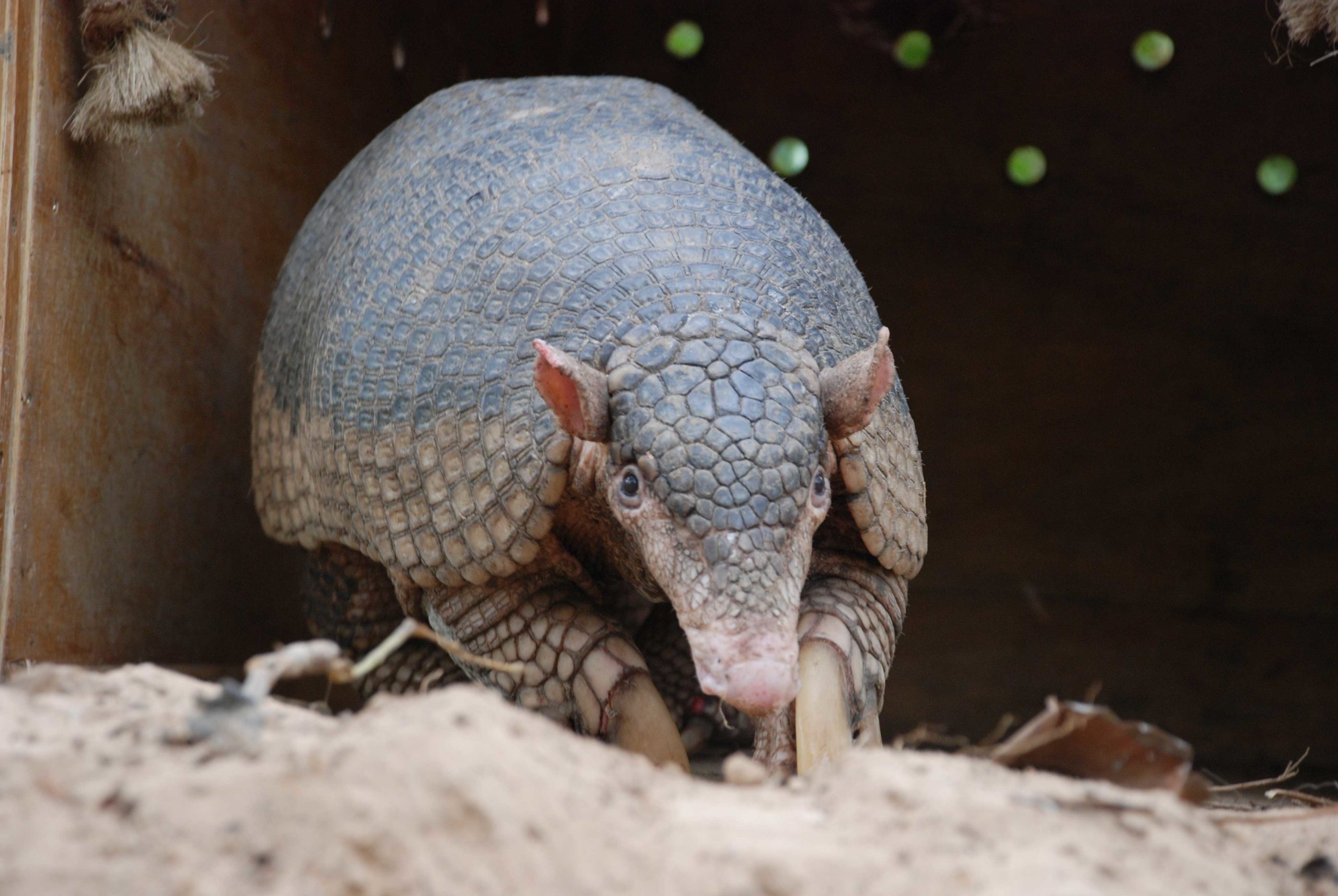 Arnaud Desbiez leads a team of biologists, but their work is more reminiscent of that of paleontologists. They trek through the Brazilian biomes of the Cerrado grasslands, the Atlantic Forest, and the Pantanal wetlands, looking for any indication of the presence of an animal rarely seen despite its size: the giant armadillo.

“It’s basically a forest ghost,” Desbiez says. “Most people don’t even know it. The connection with the giant armadillo is through indirect evidence. Finding one is like finding a needle in a haystack.”

According to Desbiez, one of the major threats to the giant armadillo (Priodontes maximus) is basically the lack of knowledge about it.

Looking to change that is the Giant Armadillo Project, created in 2010 by two Brazilian organizations, the Institute for Ecological Research (IPÊ) and the Institute for the Conservation of Wild Animals (ICAS). They’ve made several discoveries about the largest of the 20 armadillo species in the world.

The giant armadillo is a nocturnal creature that spends most of its time inside the ingenious and vast network of tunnels that it digs, which helps explain why sightings are so rare. It can weigh up to 50 kilograms (110 pounds) and grow to a length of 1.5 meters (5 feet) from snout to tail. It’s also a solitary creature.

The giant armadillo is protected by an armor comprising scales, and armed with scythe-shaped claws. The largest claw measured was about 14 centimeters (5.5 inches) long — bigger than those of a polar bear.

“It’s like a living fossil,” Desbiez says. “The first picture I took of the giant armadillo changed my life.” That was nearly 10 years ago, and even then Desbiez didn’t spot the animal in person: the picture came from a camera trap in Mato Grosso do Sul state.

Much of the research generated by the Giant Armadillo Project team — gathered through field surveys, GPS devices, and camouflaged camera traps spread throughout the forest — remains unpublished.

These technologies have made it possible for the researchers to make an unprecedented record of a giant armadillo cub in the wild. Camera traps have since snapped three other little giant armadillos. “I believe one of our greatest discoveries was about its reproduction,” Desbiez says. “We noticed that the female that used to change the holes every one or two nights suddenly remained inside one for 25 days. After giving birth, she took the puppy to another burrow and stayed there for another 15 days. Then she changed the holes again.”

Thanks to this Brazilian initiative, biologists now know that a giant armadillo pregnancy lasts about five months, with the mother giving birth to a single offspring. “Previously it was thought that there should be one or two puppies, but our studies have seen the birth of only one, with a three-year gap between each gestation,” Desbiez says.

Since the end of 2019, the Giant Armadillo Project’s biologists have also relied on a new technology that has made further discovery possible. They implanted intra-abdominal GPS devices with activity monitors in seven of the animals. Through the data generated, the team has found that giant armadillos are active for about five hours at night, walking on average 2 kilometers (1.2 miles) during this period.

Their 10 years of research have led to the publication of about 30 papers and the production of a documentary by the BBC channel, “Hotel Armadillo,” which aired in 2017. In 2015, the Giant Armadillo Project won the Whitley Awards, known in the conservation community as the “Green Oscars.”

One of the giant armadillo’s most impressive feats is found underground. The huge burrows it digs — or, rather, tunnels — can be 5 meters (16 feet) long, 1.5 to 2 meters (5 to 6.5 feet) deep and 35 centimeters (1 foot) wide. At an unrivaled speed, it can dig out its new digs for the next few days in just 20 minutes. Yet what surprises biologists is the number of other animals that benefit from these homes.

“So far, we’ve documented 70 different animals that seek shelter in the giant armadillos’ holes,” Desbiez says. “The burrows are used when there are significant climatic changes in the environment because they often maintain a steady temperature of 25° Celsius,” or 77° Fahrenheit.

The burrows draw many animals in search of food. A giant armadillo feeds on ants and termites, but when it digs the tunnels, it breaks down roots and stirs up the soil. Rodents, carnivores, reptiles and even birds, such as the 60-centimeter-tall (2-foot) seriema (Cariama cristata), have been seen in these underground hiding places.

“It was remarkable to discover that the giant armadillo, a species that little was known about, plays a key role in the ecosystem,” Desbiez says.

Desbiez says the Pantanal was the perfect starting point for studying Priodontes maximus because it’s still a relatively well-preserved region in Brazil. However, to develop conservation strategies, it was necessary to know the scenario in other biomes, hence the extension of the project to the Brazilian Cerrado (in the state of Mato Grosso do Sul), the Atlantic Forest (in Minas Gerais and Espírito Santo states) and the Chaco plains in Argentina.

The map of the animal’s range as drawn up by the project serves as a basis for the planning of economic and ecological zones; the giant armadillo is now one of the five main mammals used as an indicator to establish protected areas and conservation corridors in Mato Grosso do Sul. The species is categorized as vulnerable on the IUCN Red List, which means it is at threat of becoming extinct.

The development of agriculture and cattle breeding, with the attendant deforestation and road construction, are some of the major threats to this species in the Cerrado region. “Large mammals are the most affected by the roads,” says Aureo Banhos, a researcher with the Giant Armadillo Project. “As they travel over long distances, because of habitat destruction, this raises the possibility of crossing the roads and thus the risk of being run over.”

In 2017, researchers recognized the need to engage in environmental education to help the giant armadillo gain respect from children and local communities. With the support of Fubá, a socioenvironmental education startup, they have created activities and material for use in classrooms, ranging from kindergarten to high school. Because of the coronavirus pandemic, several of these services are available online.

“The children’s responses are very positive as we work with different demographics, from those living in the city of Campo Grande” — the Mato Grosso do Sul state capital — “and get to know the giant armadillo through our events, to those living in Indigenous communities, where it’s a much closer creature,” says Fubá co-founder Andréia Figueiredo. He adds that being such a cryptic animal, the giant armadillois always enchanting to young children.

The Giant Armadillo Project has also broadened its focus to another species, the giant anteater (Myrmecophaga tridactyla). But the COVID-19 pandemic has led to a loss of support for the initiative. “Our priority now is to save the project and extend it to the Atlantic Forest in the Rio Doce State Park region,” Desbiez says.

For now, the researchers’ mission is to make the giant armadillo a more familiar to everyone, Desbiez says: “There is a tendency in schools in Brazil to talk a lot about the animals of Africa and to forget about our fauna.”

This article by Suzana Camargo was first published on Mongabay.com on 8 September 2020 and translated by Carol de Marchi. Lead image courtesy of the Giant Armadillo Project.