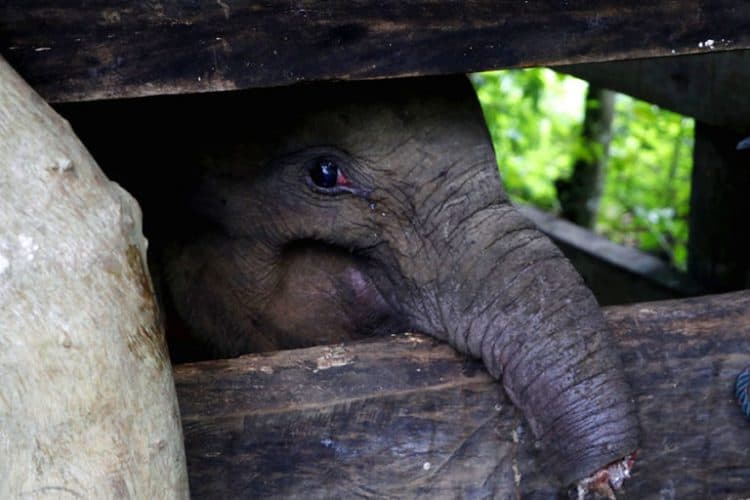 ACEH BESAR, Indonesia — A Sumatran elephant calf has died days after conservation officials in Indonesia amputated half of her trunk due to severe injuries from a suspected snare trap.

The female calf had been found alone and severely wounded by locals in Aceh Jaya district, in northern Sumatra, and handed over to the provincial conservation department, or BKSDA.

BKSDA head Agus Arianto said the animal had severe wounds to her trunk, which appeared to have been inflicted by a snare trap, essentially a metal wire typically used by poachers to trap bushmeat. Agus said veterinarians decided to amputate half of her trunk as the wounds were believed to be untreatable.

“There was no other choice because the wound had been there for a while. If we had let it be, it would have endangered the elephant calf herself,” he said.

After the amputation, the elephant appeared to show signs of recovery. Caretakers had to help feed her, because she could no longer use her trunk to grab food and feed herself.

The calf died on Nov. 16. The BKSDA has ordered a necropsy to determine the cause of death. The department has also called for the end of snare traps, and the protection of the forest and wildlife.

Snare traps are common throughout the rainforests of Southeast Asia. Though poachers usually set them to catch wild boars or deer for bushmeat, they’re sometimes used to target trophy animals such as elephants, tigers and Sumatran rhinos.

Recent studies have shown that snaring by hunters is a much greater threat to the survival of Southeast Asia’s threatened wildlife than deforestation and forest degradation.

Snares are typically made of steel or nylon wire and are easy to build. They are also indiscriminate in what they catch, resulting in the capture of non-target species, as well as females and juvenile animals. While most of the trapped animals end up in local wildlife markets or are sold directly to restaurants as bushmeat, the “high-value” species are typically traded in major cities or exported to foreign markets.

The Sumatran elephant (Elephas maximus sumatranus), a subspecies of the Asian elephant, has seen its population in the wild decline along with the loss of its lowland forest habitats to oil palm plantations. Most elephants in Sumatra today live outside formally protected areas, and are frequently involved in human-elephant conflicts when they stray into farms and villages.

The species is listed as critically endangered on the IUCN Red List, and is meant to be protected under Indonesia’s 1990 Conservation Act, which prohibits the capture, killing or trade of the animal.

This article by Junaidi Hanafiah was first published by Mongabay.com on 17 November 2021. Lead Image: The elephant calf whose trunk had to be amputated due to severe wounds from a snare trap set by poachers. Image by Junaidi Hanafiah/Mongabay Indonesia.