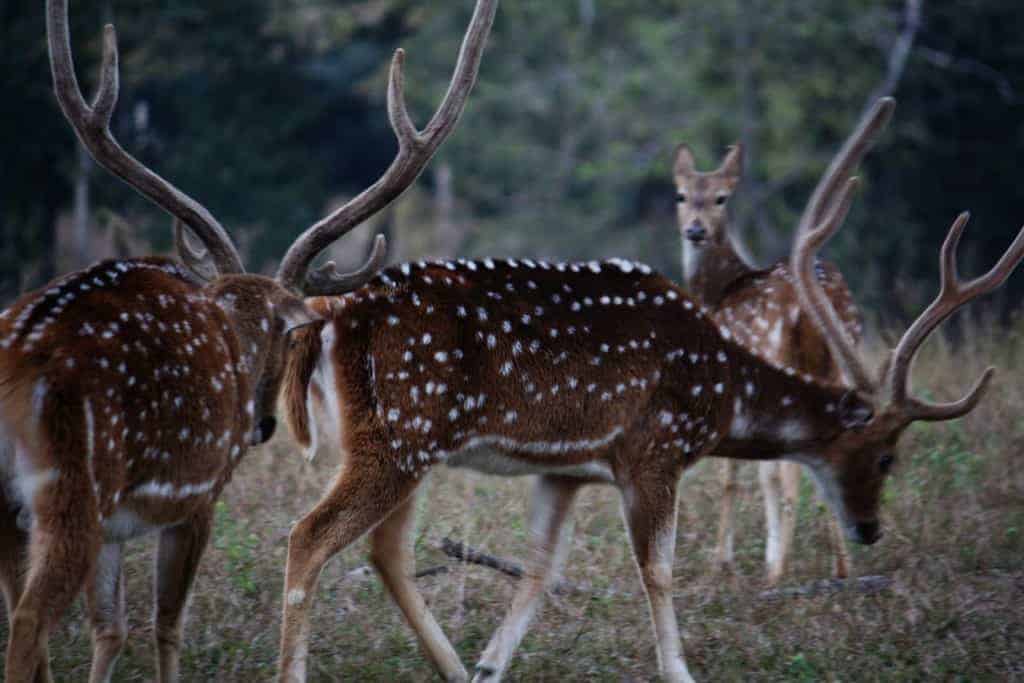 It was a patchy summer morning. The early arrival of monsoon in Rajasthan had made it intolerably humid .Our jeep came to a sudden halt – but unlike the previous ones , this one brought a bright smile to my face. A flock of fidgety male peacocks, screaming impulsively with mirth at the edge of a black patch of land, with their expansive plumage unfrilled, to welcome the mighty monsoon. What a pretty and regal welcome to the “Terrain of Sher Khan”! It was the perfect antidote to alleviate our otherwise dampen spirit caused by this untimely rain.The early arrival of black clouds pregnant with rain drops had resulted into the budding of fresh greens in an otherwise deciduous dry terrain

. The topology never expected when, just a week back we sat to decide this trip .Crowned as the “Darling of the Tiger Lover”, Ranthambore National Park, nestled at the confluence of the Aravalli and Vidhyan plateau ,is known for its unique climatic and hence vegetational features which makes it dry and open with very little cover of green. During the dry season, which offcourse lasts for most of the year, as the waterholes get drier, more and more animals cluster around the lakes — making the viewing of wildlife relatively easier.But it was a new terrai

n as we drove off the wet black pitch. Much more dense and green with plenty of water holes scattered, never conducive to sight the “Gold and Black” or even getting a glimpse of the stripes in its natural habitat. But on the flip side it was a rare opportunity to find this otherwise dry and rugged terrain draped in all-green attire. Monsoon, in the neck of the woods, has an extraordinary delicious romantic feeling which we only discovered once entered into the precinct of the park. In India there is no other season as likely to stir one’s emotions as the monsoon. After 4 months of searing heat the cooling of the showers is a cause of celebration as Mother Nature bursts out with joy to celebrate the arrival of the dark clouds. The cry of peacock, the clash of thunder, the patters of rain drops, the all pervasive smell of damp earth, the lushness of the landscape provided a perfect backdrop for our “jungle safari” much as in a miniature painting. The terrain was beautified by massive rock formations, perennial lakes, crisscrossing streams, forest opening up into large savannas. The picturesque ruins of a tenth century fort, stands amicably at the edge of the park, providing a perfect blend of tranquility and wildness. The entire landscape swiped one deep into the world of magic realism. Sitting in an open jeep we barreled off along the dusty game trail. It was somewhat like a Disneyland Ride, the “Jungle Book rollercoaster” one could term it, our jeep lurching through the forest, tree branches whipping past our faces, deer scattering as we passed. It was only my first safari and I was hungry for more. As it turned out my next day’s safaris were less like a theme-park ride, and bit more like a true wild life exploration venture. Just as we started our morning safari, there came a “Shhhhhh” from our experienced guide. “There he is” —- he has spotted an ear of the “Gold and Black”— a huge male cat prowling out of the profuse green fodder. His eyes calmly scanned the medley of six humans trying to control their excitement. I could barely manage to frame him in my “handy cam”, when he suddenly turned around and went straight into the thickness of the woods. We just gazed at the Gold and Black beauty as the large shape became indiscernible leaving us completely amused and speechless. This breathtaking scene hardly lasted for 20 sec. That last glimpse of stripes through those tiny gaps between the leaves, created a permanent wallpaper in the core of my heart. The disappointment of not having the “Jungle King” for a longer period melted fast as our jeep weaved around the rugged terrain unveiling the rich treasure of faunas that Ranthambore offers. As we drove off inside, the cheetal and spotted deer soon became a sight almost so common to merit any attention. In the midst of this, the sight of solitary sambhar galloping inside the thickers or a solitary male blackbuck – standing still with his large spiral antlers reminded me about the diversity this park has in offer. The landscape — dotted with ancient Banyan trees, Pipal trees, Dhoks and clusters of Mango trees — provides a fertile habitat to an extensive variety of flora and fauna where one can easily spot a large number of sambhars, nilgais, wild boars, sloth bears, gazelles, mongooses, monitor lizards, and even the big crocodiles, plus the ever abundant langur.One can just delight in the antics of spotted deer, licking one another, lazily resting on the green pasture — fresh from recent rain— as the couple of playful mongooses chase each other with numbers of large crocs basking languidly under the clear sun with eagles circled wildly overhead.

The avian population in this “Tiger Reserve” makes it a bird lover’s paradise and a photographer’s dream. One can suddenly hear the “tok- tuk” of a golden woodpecker peeping out of the thick of branches. In an effort to reach it through my 40x zoom lense, I suddenly discovered a spotted owl staring back lazily. The ceaseless musical birdcalls enchanted us as we scour mud tracks deep within the Ranthambore forests. A white breasted kingfisher drove into the heart of the lake while a pair of sand grouses and golden ducks were seen enjoying themselves in the harmony of nature. The flock of herons and storks were found in plenty gracing the all green landscape with the beauty of the lakes at the back. But amidst all these exalting exploration of rich treasure, still I rather could not help myself but getting perturbed by certain ingrained curse, common for most of the Indian Reserve Forests. Like many others in this country, this park is also plagued by ever-increasing popularity of “thoughtless-tourism” which leads to more and more influx of insensible picnickers — making the park a noisy-cafeteria; leaving the wild lives more fragile — striving for their privacy of life.

Those days are gone when the worship of nature in all its different forms was an essential part of the cultural legacy of human species. It is sad to note that the modern human being is not in consonance with the nature at all. But time has riped enough to understand that this might be the last chance for us to awake up our inside concern for these fragile predators. If, today, we l 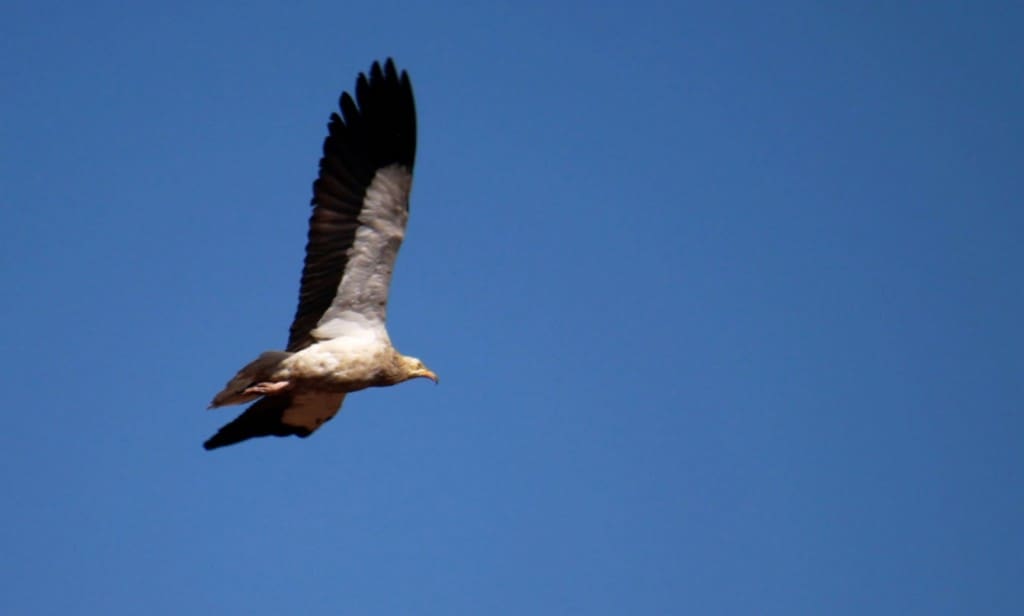 ose this magical predator we should no longer be a proud nation which boost thousand years of civilization that tells to revere all forms of life. So if you are a true wildlife enthusiastic, the trick, here, is to distance yourself from these noisy tribe and breathe in the fresh tiger air. Once you are in a complete harmony with the serenity around, that very experience brings a altogether new delectable feeling to the whole endeavor. On way back we were greeted by herds of Indian gazelle grazing lazily and a pair of wild boar standing calmly as we passed by in total silent while fading sun casts an orange glow all over. In his last visit my friend could spot three tigers – one tigress and a pair of cubs frolicking in the water. Though we were barred from this slice of luck but the wonderful entire experience engendered a slew of feelings – excitement, peace, longing and romance.

A weekend trip is enough to discover this romance filled wild world. Rolling hills, valleys and plateaus interspersed with forest streams and romantic water holes will surely enamor you and provide a memorable impression of a deep green jungle and a wildlife holiday well spent. Once you are at Ranthambore , you can also enthrall yourself through the unique shopping experience at the number of stores situated just at the outside of the park.The store offers different varieties of Rajasthani arts and crafts to tourists. You can even take postcards, T-shirts, and greeting cards with images of tigers and other wild animals and birds. Locally made textiles embellished with traditional embroidery and mirrors attracts lot of foreigners to the unique Indian taste of culture.Rajasthani turbans and other handicraft items make for interesting souvenirs to take back as memories of your trip.

Getting There::This exalting scented green world agog with rare wildlife is located just at a distance of 140 Km from Jaipur which is very well connected with any major city in India by air, train or road transport. From Jaipur one can easily choose from from luxury air-conditioned coaches to private taxis and local buses of the Rajasthan Transport Corporation to reach to the Park. The park is open to tourists during October-June. But one should keep in mind due to huge demand for open top vehicles visitors would be strongly advised to book the Gypsys well in advance.