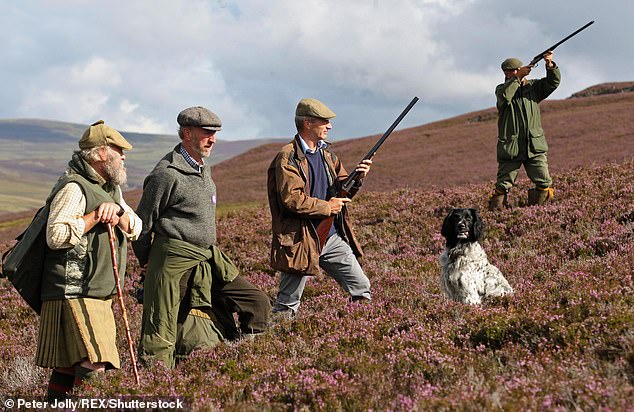 Under consideration is the phasing out of lead ammunition across all environments in England, Scotland and Wales.

Shooting organisations say that the full legal ban could take as long as eight years to come into force – although they are encouraging their members to move to non-lead ammunition within the next four years.

Tim Bonner, chief executive of the Countryside Alliance, one of a number of groups which are abandoning lead shot before it is illegal, said yesterday: ‘There are people within our community who are quite reactionary about making this change, and we’ve picked up a bit of stick from some members for this, but it’s going to happen.

‘We can either do it on our time-scale, or it will be imposed on us. The really positive thing is there are now alternatives to lead.’

The alternatives are steel, bismuth and tungsten. Steel shot costs around 30p a cartridge, a similar price to lead, but the concern is that it can wreck the barrels of shotguns that are not specially treated.

The Government has requested an official review of the evidence, with a public consultation to follow on banning the ammunition.

Environment minister Rebecca Pow said: ‘Addressing the impacts of lead ammunition will mark a significant step forward in helping to protect wildlife, people, and the environment.’

Officials pointed to research by the Wildfowl and Wetlands Trust which shows that between 50,000 and 100,000 wildfowl die each year after ingesting lead from spent pellets which they mistake for food. Mr Bonner said that such estimates were ‘a bit on the high side’.

Shooting organisations have vowed to phase out the use of lead within five years. The British Association for Shooting and Conservation’s Ian Bell said encouraging progress had already been made, with manufacturers bringing new products to market and game dealers minimising the amount of lead in meat sold to the public.

The EU is expected to ban imports of game shot with lead – a major concern because around 60 per cent of British game is exported to Europe. Fears have been expressed by manufacturers as to whether they will be able to meet demand for new types of ammunition.

Last year several leading cartridge makers said that they thought that developing ‘high performance ammunition’ without lead in a short time frame, ‘without significant support’ from the Government, would be impossible.

Jonathan Young, editor of countryside sports magazine The Field, has voiced his doubts about the ability of steel pellets to kill game ‘efficiently and cleanly’.

But Dr Julia Newth of the Wildfowl and Wetlands Trust said: ‘Conservationists, shooting organisations and game meat retailers have recognised the toxic risks from lead ammunition.’