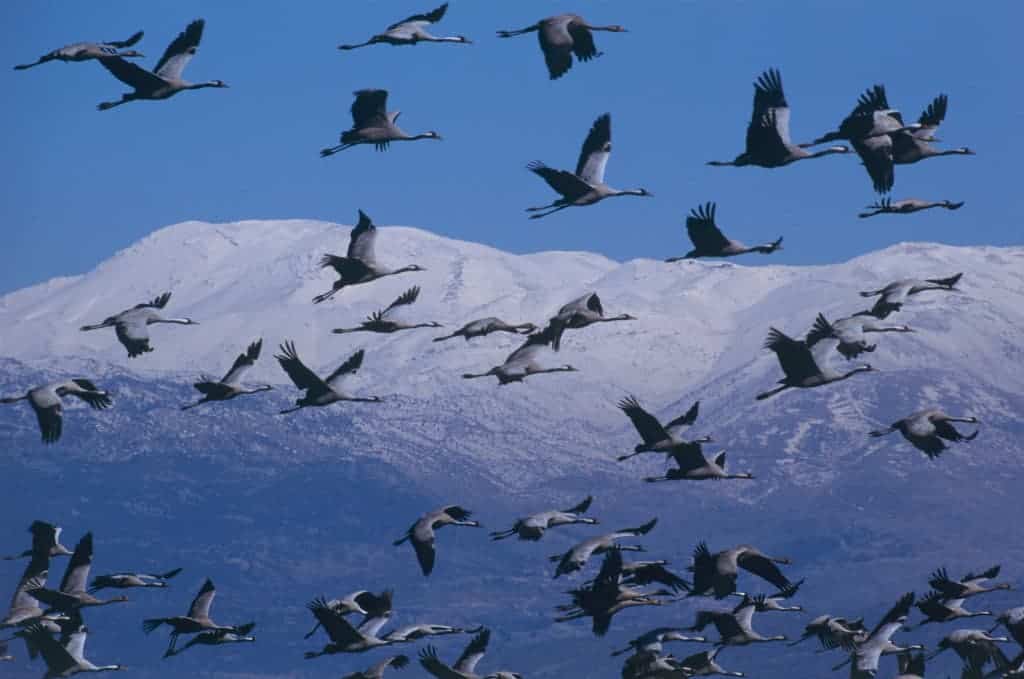 HULA VALLEY, Israel — It’s chilly and still dim at 6 a.m. when Haggai Hochman, a Galilean farmer, slides into his tractor and sets out on his dusty course. Behind him, in a repurposed fertilizer spreader, he drags four tons of dried corn kernels. It’s “for the birds,” he says.

As Hochman turns off the path and enters a clearing, the earth around him appears to shake and billow.

Thirty-two thousand cranes flap and flutter, parting to let him through.

The blades turn, and kernels start to pop out of the spreader.

Cranes, it turns out, are finicky creatures. Hochman first tried feeding them barley, but they wouldn’t touch it. They also spurn wheat — but they’ll dig up an entire field of it to get to what’s left of last summer’s crop of peanuts, beneath.

Hochman, who tills his fields and farms all summer, enjoys his winter mornings among the cranes. “For 10 years I chased them,” he chuckles. “And now, they chase me.”

What may look like a tender-hearted enterprise of man feeding fowl is, in fact, part of a singular program in which wild birds are fed with the aim of preserving their old migration patterns while protecting relatively new agrarian lands.

The Upper Galilee, and the Hula Valley, a swampy basin almost at Israel’s northernmost point, was one of the premier sites chosen by early Zionist pioneers who arrived in Ottoman-era Palestine from Eastern Europe and Yemen late in the 19th century, wishing to settle their ancestral lands. Their movement was called the First Aliyah, or the Farmer’s Aliyah, using the Hebrew term for ascent.

One of their most intractable challenges was farming the Hula marshlands, or, when faced with outbreaks of malaria, even just surviving them. Both Ottoman authorities and then the British government that ruled Palestine from 1917 to 1948 toyed with the idea of draining the swamp, but never acted.

Finally, in 1951, the nascent State of Israel and the Jewish National Fund, a state-affiliated nonprofit, embarked on a massive engineering project that culminated in the successful drainage of the Hula Valley. But the project had disastrous side effects: The newly exposed land proved impossible to cultivate. Its unprotected topsoil flew up into impenetrable clouds of dust, and the peaty mud had a propensity for spontaneous combustion, causing underground blazes that took months to extinguish.

In 1993, local authorities decided to re-flood part of the original Hula Lake. Ten years later, the area was declared a wild bird sanctuary.

The cranes that surround Hochman’s tractor are some of the half billion birds that stop at the Hula Valley as they migrate every fall and spring between Europe and Africa.

Although cranes’ migration patterns have been recorded virtually unchanged for thousands of years, their behavior is remarkably adaptive. The birds “never stopped flying over the Hula Valley, even when it was drained. They just had to look elsewhere for places to rest and store up,” says Naday Israeli, one of the reserve’s managers.

Now Hula functions as a much-needed way station for cranes, which travel about 6,000 miles between their winter and summer homes. In the surrounding areas of the Mediterranean, the birds are shot at for sport, and in some cases for food. “In Malta and Cyprus you can buy pickled wild birds in jars on the streets,” Israeli says. People show off their killings on Facebook pages. “Since UNESCO declared the sport of falconry a protected part of “living human heritage ” two years ago, Israeli says,”it’s a massacre.”

“Israel is the only place along the entire route where it is safe for them to land now,” he adds. “In places where humans are killed, who cares about birds?”

When flying north over Israel, the cranes now rise up to 10,000 feet into the sky at the Lebanese border, to escape being shot.

“They’re brilliant,” Inbar Rubin, the site’s content and guide manager, says admiringly of cranes. “Remarkable.” Cranes fly from Finland or Russia to southern Africa, crossing about a quarter of the world’s surface. In the wild they live for up to 30 years, and reach sexual maturity at about 4 years.

They mate for life

Their coupling starts as it often does for humans, Rubin explains, with “flocks of young males dancing, and if a female likes one, she’ll dance with him.”

The similarity stops there. “Cranes never stop courting their partners; the older males keep dancing with their mates in order to show the young ones how to do it.”

Wildlife Conservation is good for tourism

Israel hosts about 400 species of birds, and, in the last decade, a growing flock of birdwatchers who migrate seasonally into the country, and can be identified at Ben Gurion International Airport by their light luggage, colorful, nature-themed attire and casually displayed binoculars, at the ready in the event a hoopoe (Israel’s national bird) or a coot flies through the arrivals hall.

The flighty Rubin has something of the same spirit. Careening in an electric vehicle along the parks’ paths, she drives off the road while craning her neck leftward and exclaiming “falcon!”

The reserve is home to wild boars, jackals, countless nutrias, tough jungle cats that are the tan color of reeds, and birds, lots of them: black ibis, chiffchaff, leaf warblers, Cetti’s warblers, a goose who believes he’s a crane and is now on his second migration to the park along with the crane family that adopted him, mallard ducks, teals and at least one moorhen, who crosses the road on foot followed by six chicks, in a scene that could be taken from Make Way for Ducklings. And the black-shouldered kite, that Israeli announces with unabashed pride, has now had eight breeding cycles in the restored habitat.

Francis Argyle, 68, a tall, spare, fast-moving volunteer who identifies himself as the park’s “head ringer,” is in charge of one of the Hula Valley’s top ecological projects: documenting the birds.

Birds are caught by ultra-fine nets, identified, registered and tagged with numbered aluminum bands. For them, Argyle says, “it’s like wearing a wristwatch.”

Some 20,000 birds are registered every year at the Hula Valley Reserve. “On a busy morning I can handle 200 on my own,” claims Argyle, who started out in Shropshire, England, as a 13-year-old apprentice “ringer,” and was once an ornithologist for the Shah of Iran.

Rubin likes to cradle the birds in her cupped hands before letting them go. “Part of you flies away with it,” she says, “like a wish.”

The ringing project has led to some amusing international spats. Last October, Hezbollah, the militant Islamic group that rules southern Lebanon, announced it had caught an “Israeli spy-eagle,” having deduced this from the bird’s ankle-band, which is marked with the word “ISRAEL.” Al-Manar, the Hezbollah TV station, declared that “recruiting spies from the animal kingdom is a well-known Israeli practice” and that “wiretapped fowl” had been found in Saudi Arabia, Turkey, and Egypt.In 2012, Sudan nabbed an “Israeli spy-vulture.”

Barn Owls instead of chemicals

Israel lies directly on the Syrian-African Rift Valley, its territory a bridge between Europe, Asia and Africa. It is what accounts for its unusual diversity of wildlife. Yet one of the few species not to be found in the Hula Valley or in its neighboring farmlands is the ubiquitous common mouse.

How come? A joint Israeli-Palestinian-Jordanian project has installed nesting boxes for barn owls in the fields. “They are excellent mouse predators,” according to Rubin. “A couple of barn owls will kill thousands of mice a year, and you’ve got your wheat fields untainted by chemicals. Birds do just everything,” she smiles.

For now, they’ve achieved a goal John Kerry is still striving to accomplish: getting these three prickly neighbors to ignore borders, collaborate on a positive venture, and focus on anything but killing each other.

This article was written by Noga Tarnopolsky for Globalpost.com