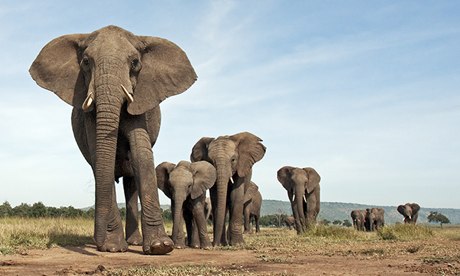 The ivory stockpile in the secure government warehouse – six tonnes of scarred tusks, glossy Confucius statuettes with $10,000 (more than £6,000) price stickers, coffee table items, and too many chunky cuff bracelets to count – represents millions of dollars and the slaughter of thousands of African elephants.

On 14 November, at Barack Obama’s instruction, and in front of visiting dignitaries and television cameras, every last intricately carved and high-dollar item will be fed into the jaws of an industrial strength rock-crushing machine and smashed to splinters.

The hope is that this public act of destruction will serve as a turning point. White House officials and conservation groups calculate that demonstrating the president’s commitment to breaking up the illegal ivory trade will persuade other governments to take similar measures, and help put the wildlife traffickers on the run.

But it may be too late. Two decades after an international ban on ivory sales, an explosion in wildlife trafficking has once again brought African elephants to the brink of extinction. Nearly 100 African elephants are killed every day for their tusks to feed a huge demand for ivory trinkets from newly wealthy buyers in Asia who see ivory as a status symbol.

US security officials say the global trade in illegal ivory has grown to $10bn (about £6.2bn) a year – just behind drugs and human trafficking. The huge profit potential has also turned ivory into an important line of financing for terrorist networks such as al-Shabaab, the al-Qaida affiliate that carried out September’s attack on the Westgate shopping centre in Nairobi.

“This is not the kind of poaching that we have dealt with in the past,” said Dan Ashe, the director of the Fish and Wildlife Service, the agency leading the US fight against wildlife trafficking. “It’s syndicated and sophisticated criminal organisations that are driving the trade.”

The grisly results are visible in the vast storehouse outside Denver – ordinarily off-limits to the public – where six tonnes of ivory seized by US law enforcement officials over the past 25 years is heaped among stuffed tigers, caiman ashtrays, and other artifacts of the illegal wildlife trade.

The smuggled ivory was seized by US agents at airports and cargo ships, hidden in the false bottoms of suitcases and shipping crates, buried in jars of face cream, or disguised by being stained dark brown with tea. Some of the ivory – the big display case of bracelets – made it as far as a jewellery shop off Times Square in New York city, before it was seized by agents.

“There could be several hundred elephants represented on this pallet alone,” said Bernadette Atencio, the supervisor of the US Fish and Wildlife repository.

America is one of the top destinations of illegal ivory from Africa, as well as an important transhipment point for the carved ivory trinkets bound ultimately for the leading markets in China, Japan, Thailand and other Asian countries.

But the six-tonne haul is only half that seized in China this week alone – 3,1888 pieces of elephant tusks were found in Xiamen city, with an estimated value of 603m Yuan ($99m or £62m) on the black market. The sheer volume of trade is depleting populations of African adult male elephants, Atencio said, reaching for a polished tusk, carved with renderings of the “big five” in African game.

By ordering the destruction of the ivory haul in Denver, American officials hope to send a definitive message to traffickers that the bottom is about to fall out of the ivory trade, and that there is no use hanging on to stores of ivory, because it will eventually end up being destroyed.

The strategy has been endorsed by leading conservation groups, such as the World Wildlife Fund, and wildlife officials in Kenya and other states which depend on African elephants for their tourism industries.

“It does send a signal that ivory is not going to be a good investment for very much longer,” said Allan Thornton, who heads the Environmental Investigation Agency.

US diplomats are now reaching out to other governments to carry out similar high-profile acts of destruction. Kenya has destroyed its stores of illegal ivory in the past. The Philippines carried out a crush earlier this year.

The Obama administration is stepping up aid and training for park rangers in Africa to try to stop the traffickers on the ground. The Clinton Global Initiative has also aligned with the US government efforts, with Hillary Clinton in September announcing an $80m initiative to train park rangers and sniffer dogs at 50 poaching hot spots across Africa.

Meanwhile, the Obama administration is promising to strengthen penalties against those caught smuggling ivory, a White House adviser said. “The laws need to be changed. They need to be stiffened,” said David Hayes, a former deputy secretary of interior who was appointed last September to a new White House council on wildlife trafficking. “I think that’s going to be a primary focus for the advisory council – enforcement penalties, and what we allow and what we don’t.”

The push to end trafficking comes at a desperate time for African wildlife, with rhinos and elephants under threat from mass poaching gangs. The explosion in poaching threatens to reverse a conservation successory story, with African elephants showing signs of a comeback after a 1990 ban on ivory sales.

But conservation groups say that positive outcome was undermined by a misguided decision by the Convention on International Trade in Endangered Species (Cites), the entity set up to protect at-risk wildlife, to allow limited sales of ivory. In 1997, Zimbabwe was granted permission to conduct a limited sale of 50 tonnes of ivory. In 2008, China was also allowed to import 60 tonnes of ivory. The idea was to slake the demand for ivory among the newly wealthy elites of China. But the result was a catastrophe for African wildlife, said Paula Kahumbu, chief executive of Wildlife Direct. “We have seen in Kenya an eight-fold increase in poaching since 2009,” she said. “The volume of ivory being taken across the country is just staggering.”

Campaign groups said the combination of new buying power in Asia – where there is a surge in demand for ivory – and armed groups was overwhelming poorly paid and trained rangers in African wildlife parks.

A new breed of traffickers, armed with night-vision goggles and high-powered rifles, began staging mass attacks – such as last September’s cyanide poisoning of 300 elephants at a Zimbabwe watering hole.

What put elephants on the top of the US agenda however was terrorism. Over the past few years, US intelligence officials have accumulated evidence that wildlife trafficking is funding rebel armies and causing instability in Africa.

US security officials and campaign groups have said the militant group al-Shabaab was getting up to 40% of its funds from the illegal wildlife trade, with ivory financing their operations and paying their footsoldiers, by acting as middlemen in the wildlife trade.

The result is a grisly kill-to-order system, with brokers paying poachers as little as $20 a pound for the raw tusks, and selling them onwards for as much as $800 a pound in some parts of Asia. Finished pieces sell for up to $4,000 a pound.

By last year, Clinton, then secretary of state, was so concerned about the links with terrorist groups that she designated wildlife trafficking a national security threat. Barack Obama during a visit to Africa in July also pledged action against the traffickers.

On 14 November, the international community – and the traffickers – will witness the first instalment of Obama’s anti-trafficking plan. It’s far from certain, though, whether Obama will be able to pull African elephants back from the brink, yet again.

“I believe that the scope and impact of the poaching crisis has now reached the highest levels of the US government,” said John Webb, a former Department of Justice environmental prosecutor who is also a member of the new White House advisory council. “But, unfortunately, I think it’s going to take a huge effort to turn it around this time.”

no the extrapolation would be to go after the people who run the drug cartels rather than the kids on the street corners, which is what actually happens.
And in fact we owe China billions so they would just ask for the loans back and bankrupt the USA.
We do however need to take drastic action on the people who drive this business the ones who import and buy the ivory.

I suppose then (using your same twist of logic) that we shouldn't condemn or bother with the drug cartels in south and central America either, only the people "using" their products in the United States. Perhaps they were merely poor, corrupted lads themselves, driven to kill anyone that stands in their way. Guess you missed my suggestion of curtailing China's most favored nation trade status with the U.S. That would cost them billions. Don't think this would be a proper incentive?

The ivory in the USA was legally taken. What is wrong is sometimes just s paperwork screw up, done the the USF&W in America. Why punish a hunter for a Government screw up. If any of you knew anything about true conservation, in place of preservation you would understand.

All these countries should have flooded the market with the ivory. Makes no sense to burn it. Flood the market and the price drops!.

Mark, what you need to know is in Africa most poachers are shot on site.

I disagree with your condemnation of Africa. The main targets should be China and Vietnam and other ivory consumers. If you were being offered a lifetime amount of money you might be corruptible too. In fact you are, our consumption destroys the environment and we sit and condemn the countries that supply us. The pressure needs to be on the consumers along mostly Asia. A world wide decision to ban ivory as you suggest is the only answer and that includes destroying ALL ivory that exists including in museums and antiquities. Ivory ownership has to become repugnant and dangerous. The… Read more »

I've said it before, and I'll say it again: A state of war should be declared on the poachers, and by that I mean, that if an individual or group is/are caught killing Elephants for their ivory, it should be an instant death sentence. Shoot them on the spot. But make it clear that this crime is no longer to be tolerated under penalty of death. As for China, I think that giving them a choice is only fair. Do they want to maintain most favored trade status with the United States, their biggest customer? Then ban all possession or… Read more »