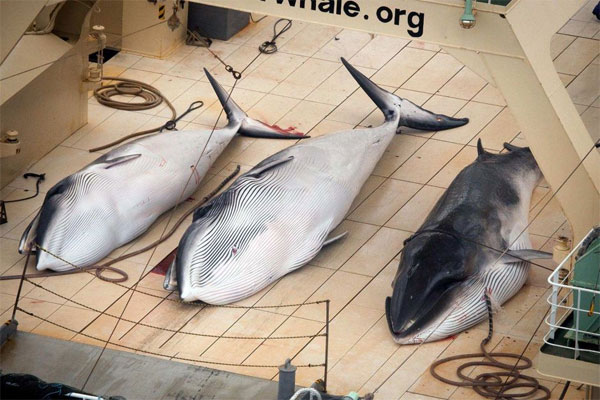 “After a 360-mile chase, The Sea Shepherd Fleet drove the Japanese whaling fleet’s factory ship, the Nisshin Maru, out of the Antarctic Treaty Zone,” said the group in an emailed statement. “Sea Shepherd has all ships in the Japanese whaling fleet accounted for, and can confirm that the whale poaching fleet is scattered and currently not hunting whales. The harpoon ships are separated by hundreds of miles. The Nisshin Maru is on the run and unable to stop and whale in its self-designated whale-poaching grounds.”

Anti-whaling group Sea Shepherd said its fleet of ships has successfully disrupted the annual Japanese whale hunt in the waters off Antarctica.

The whaling vessels fled their hunting grounds less than a day-and-a-half into the hunting season. Sea Shepherd said the fleet has killed four Minke whales so far.

The activist group says its effort to shut down commercial whaling by the Japanese however is far from over.

“We have won this battle, but the war for the Southern Ocean Whale Sanctuary will wage on over the coming months,” said Adam Meyerson, Captain of The Sam Simon, one of Sea Shepherd’s three ships.

Sea Shepherd is highly controversial for taking direct action against whalers. Japan says the tactics amount to piracy and put lives at risk, but Sea Shepherd maintains that it is merely enforcing anti-poaching laws. For example, Sea Shepherd says that Japan was whaling inside the Southern Ocean Whale Sanctuary, where commercial whaling is prohibited.

But Japan uses a loophole, designating its whale killing in the zone as “scientific research”. A case on the issue is pending in the International Court of Justice, but in the meantime, Sea Shepherd says it “will do what ever it takes to ensure no more whales have to endure pain and suffering at the hands of these whale butchers from Japan.”