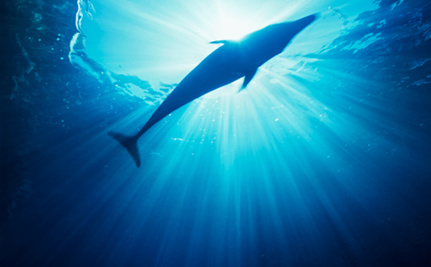 A new analysis shows that Japan’s annual hunt of small whales, dolphins and porpoises is unsustainable and could even drive some species toward extinction while at the same time presenting a real risk to human health.

Every year, Japanese whaling ships catch and often times brutally butcher up to 17,000 small whales, dolphins and porpoises (known collectively as smaller cetaceans) that are found along its coastlines, in addition to Japan’s larger Antarctic whaling expeditions.

It’s believed that in total more than one million small whales, dolphins and porpoises have been slaughtered off the coast of Japan in the past 70 years. Despite widespread criticism and calls to end this practice, Japan defends the nation’s whaling habits as a matter of tradition. That tradition, says a new report, is unsustainable and “irresponsible.”

The report, entitled“Toxic Catch: Japan’s unsustainable and irresponsible whale, dolphin and porpoise hunts,” is published by the UK’s non government affiliated Environmental Investigation Agency (EIA) and was launched in Tokyo, Japan on Thursday October 31. The report alleges that the Japanese government is failing to take accurate population samples of the cetaceans it hunts and is instead creating hunting quotas based on decades old figures which in turn allows more cetaceans to be hunted while driving the population dangerously low.

“The hunts in Japan’s coastal waters specifically target nine small cetacean species, eight of them with Government-set catch limits which are clearly unsustainable,”EIA cetaceans campaigner and report co-author Sarah Baulch is quoted as saying. “For 2013, the catch limits allow the slaughter of 16,655 small cetaceans, but our analysis of available scientific data raises very serious concerns about the sustainability of these hunts. In using outdated population information and lacking a scientifically rigorous method for setting catch limits, the Government is displaying a lack of responsibility and is failing to implement its own policies of sustainable utilisation.”

Prior to 1993, Japan had been whaling with abandon, oftentimes hunting some 33,000 animals in any one year. In 1993, quotas were introduced as a means for Japan to ensure that its coastal hunts remained sustainable. Yet there is now strong evidence that even with drastically reduced cetacean hunts, the practice is shaking the very foundations of several species, including the favored striped dolphin, to the point where the Japanese government is finding it can’t even fulfill the annual numbers it wishes to capture or kill.

To put that in real terms, in the 1980s figures say Japan was hunting 1,800 striped dolphins a year. Now, hunters are managing to find only 100. It’s not just striped dolphins that are being hunted this aggressively, either. For instance, when it comes to the Dall’s porpoise, the report estimates that the hunting threshold is up to 4.8 times higher than what is considered a safe level that regular population renewal could absorb.

It isn’t going too far to state, then, that Japan’s whaling practice poses a real extinction threat. So why is Japan hunting these animals at all?

Many of the animals that are hunted in the name of tradition are killed for their meat and blubber. That in itself throws up significant questions, not least of which is the Japanese government’s failure to properly screen the food products this industry produces: a number of studies show that there are dangerous levels of mercury in the whale meat being sold to Japanese consumers.

In 2003, a Japanese research team found that in national samples of toothed whale red meat, the country’s best selling whale meat that includes meat from dolphins, porpoises, killer whales and pilot whales, every single sample contained mercury levels in excess of guideline levels. Some samples were found to contain almost 200 times the allowance. Japan has had significant problems with mercury infiltration in its fishing supplies, the mercury poisoning incident of Minamata being one ready example, which is believed to have caused a number of birth defects and neurological problems in children.

More recent figures suggest that there may also be a danger from several other contaminants, for instance polychlorinated biphenyls (PCBs), with some tested product samples showing around 85 times what is considered a safe limit.

However, it’s not just the food product industry that is keeping Japan’s whale hunts alive. There is a growing market for smaller cetaceans among aquariums and sea parks, with the EIA estimating that just one sale of a marine mammal can fetch anywhere between $8,400 and $98,000.

This is, in fact, why stopping Japan cetacean hunting is so difficult. There are strong economic incentives to continue and, by using tradition and the prospect of offending Japanese culture as a shield, Japan can maintain the industry as a part of a cultural heritage.

Yet, with the threat of extinction looming for several species, and wider concerns about the welfare of those animals it kills, it will be up to international governments and outside agencies working with advocacy groups within Japan to intensify efforts to phase out whaling while remaining committed to a long term total ban and not allow Japan to backslide as it has in the past.

This article was written by Steve Williams for Care2.com