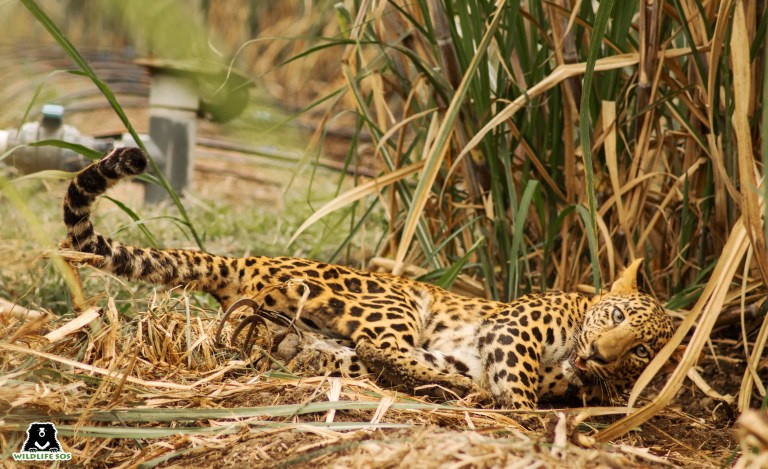 Today, the wild animals of the world face myriad threats that are steadily wiping out populations across the planet. As a wildlife conservation charity, Wildlife SOS comes across many animals that find themselves in inconceivable situations, oftentimes due to human interference.

One of the most dangerous threats that we have rescued many animals from, is the snare trap and jaw traps – a truly cruel and barbaric invention that has led to the slow and agonizing death of innumerable animals. Anything from canids to wild pigs, birds, and larger mammals such as tigers, bears, leopards, and elephants are at threat from these deceptively simple-looking baits.

What Are Jaw Traps and Snares?

Jaw traps (called Khadka in Hindi) and snare traps are lethal hunting devices that can cause severe lacerations, joint dislocations, fractures, and even death to wild animals. Animals caught in snares and traps often struggle for hours or even days before succumbing to thirst, hunger, strangulation, internal injuries, even predation.

Farmers often set up such traps around agricultural fields to prevent animals such as wild boars from raiding their crops. Occasionally, these lethal devices are used for hunting bushmeat and by poachers.

These traps can be easily procured and the commercial use of such tools is also taught by professional trappers in many parts of the world, online or otherwise.

In recent times, we have seen a rise in the number of video tutorials about how to make and use snares and crude traps. Only a small percentage of these animals survive the horrors of these deadly traps and the deaths of a majority of these victims of poaching go undocumented.

Jaw traps are primitive and unsophisticated, but their use remains widespread because they can be made at almost no cost and can take down anything from small animals like rabbits and foxes to endangered elephants.

The animal spends hours thrashing about trying to get out and expending all its energy in figuring out an escape – as it moves, the trap wire tightens around it, leading to a long, drawn-out death by suffocation or infections and maggot infection of the wounds.

Some, such as tigers, bears, and leopards have even been known to chew off their own limbs in order to free themselves. Animals that do manage to escape often die days or weeks later as a result of their injuries. And this is not to mention the pain, terror, and anxiety that any trapped animal experiences.

Between the months of August and November 2019, Wildlife SOS rescued 3 sloth bears that had become the unwitting prey of snare traps laid across the forests of Karnataka. Over the years, Wildlife SOS has assisted various State forest Departments in rescuing sloth bears, hyenas, leopards, and jackals stuck in jaw traps –fortunately, the animals received the necessary treatment and were able to return to the wild. However, not all animals have the opportunity to escape from these indiscriminate killing devices.

Earlier this year, the NGO saved the life of a leopardess trapped in a jaw trap outside a village in Maharashtra. A four-member team geared up with safety nets, tranquilizing equipment, and protective gear to assist the Forest Department in the operation. When they arrived at the location, they observed that the big cat’s left forelimb was caught in the steel trap. Unfortunately, despite the successful rescue and following treatment, the leopard’s injuries were too extensive and it succumbed.

This insidious threat must be tackled with the utmost severity to ensure that no more animals fall prey to the ghastly demise it inflicts. Wildlife SOS liaisons with various State Forest Departments to create awareness amongst local communities about co-existing with wild animals that reside in the neighboring forest areas and the illegality of committing such crimes against wildlife.