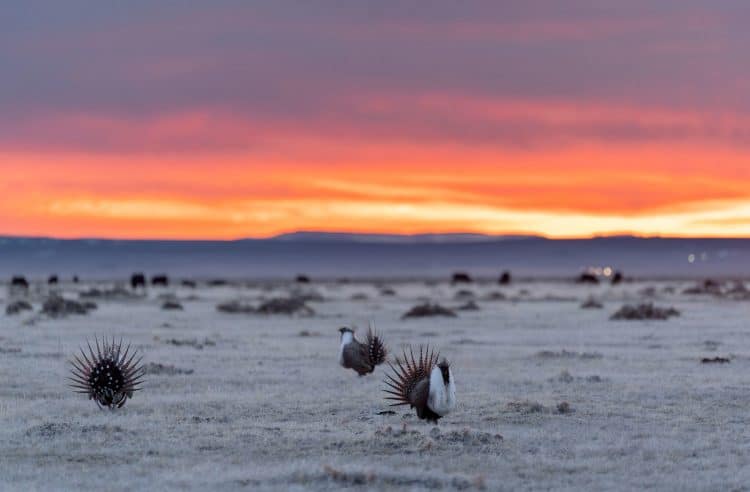 In March, when the Trump administration released a new set of land-use plans that rolled back a collection of 2015 restrictions on oil and gas drilling across 9 million acres of the Greater Sage-Grouse’s most important habitat, environmental groups immediately sued to get the plans thrown out. They also asked for a court order to stop the Bureau of Land Management (BLM) from implementing the administration’s less protective plans until a final ruling on that suit.

Now, a federal judge has granted that order. On Wednesday, U.S. District Court Judge B. Lynn Winmill issued an injunction that blocks the March plans, finding that the administration failed to take a hard look at how they would affect populations of the imperiled ground-dwelling birds. “When the BLM substantially reduces protections for sage grouse contrary to the best science and the concerns of other agencies, there must be some analysis and justification,”Winmill wrote.

As a result, the more restrictive set of management plans from 2015 are once again in effect until the courts reach an ultimate decision on the legality of this year’s rollbacks. The administration is likely to appeal Wednesday’s ruling, which affects more than 51 million acres of sage-grouse habitat in Idaho, Wyoming, Utah, Colorado, Nevada, California, and Oregon.

“The Bureau of Land Management deliberately undermined protections for the sage-grouse, then had the audacity to claim these rollbacks would not impact the species,” said Sarah Stellberg, a staff attorney with Advocates for the West who represented the plaintiffs, in a statement. “The law demands more. This injunction is critical to protecting the sagebrush steppe and this icon of the American West.”

Greater Sage-Grouse have lost some 90 percent of their historic numbers and roughly half their pre-settlement range due to oil and gas development, wildfires fueled by invasive grasses, and other disturbance. To avoid listing the bird under the Endangered Species Act, conservation groups, fossil fuel companies, ranchers, and others came together in 2015 to reach a major compromise, articulated in 98 land use plans across 10 western states. The U.S. Fish and Wildlife Service determined that the protections in those plans were enough to keep the bird’s population healthy without a listing under the Act. Among those protections was a policy that prioritized areas outside sage-grouse habitat for development.

The BLM under President Trump has leased 10 times more priority sage-grouse habitat per month than it did in the previous administration.

But even before replacing those plans with its own, more industry-friendly versions, the Trump administration showed little regard for their provisions to safeguard sage-grouse. The BLM under President Trump has leased 10 times more priority sage-grouse habitat per month than it did in the previous administration, according to a recent report. In at least one recent lease offering, every acre on the auction block was in grouse habitat. Such development pressure threatens to worsen steep declines in sage-grouse populations across the West that experts say are too severe to be explained by the bird’s periodic population cycles.

“The record shows that the 2019 Plan Amendments were designed to open up more land to oil, gas, and mineral extraction as soon as possible,”Winmill wrote in his ruling. “That was the expressed intent of the Trump Administration and then-Secretary Ryan Zinke. There is no indication that current Secretary David Bernhardt is proceeding at any slower pace.”

An Interior Department spokesman told the New York Times that the administration believes its plans are on a solid legal footing. “Western States involved in the 2019 greater sage-grouse conservation plans overwhelmingly supported the plans on a bipartisan basis, which we firmly believe to be in the best interest of the American people,” Nicholas Goodwin told the paper.

Wednesday’s decision does not invalidate lease sales that have taken place since the Trump administration’s plans took effect, Stellberg tells Audubon magazine, but it opens them to legal challenges from the plaintiffs or other groups.

It may also bolster the arguments in a separate legal challenge of the administration’s leasing practices brought by the National Audubon Society, the National Wildlife Federation, and the Wilderness Society, the same groups that issued the report on leasing in grouse habitat. If the plaintiffs prevail in that lawsuit, leases issued under the 2019 land-use plans would be invalidated, and the BLM will be required to meaningfully prioritize leasing outside sage-grouse habitat, as it’s supposed to do,says Nada Culver, vice president of public lands and senior policy counsel for Audubon.

“It’s nice to be right that these changes were as bad as we thought they were, but it’s also concerning that we’ve been living with these changes for some time, and we know the administration is going to fight to keep them in place,” Culver says of Wednesday’s ruling. “To me it reinforced the importance of our lawsuit, and I hope it bodes well for our lawsuit as well. I think we have similarly strong arguments.”

This article was first published by Audubon on 17 October 2019.