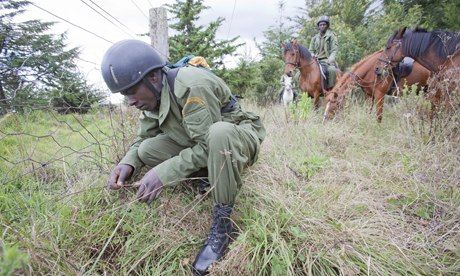 After roaming free for millions of years, rhinos may be able to survive in Kenya only if they are protected behind fences in sanctuaries, a leading conservation charity has said. Kenya has about 850 black and white rhinos out of approximately 25,000 in Africa, but more than 50 were killed for their horns in 2013, up from 30 killings in 2012, and those that remain are increasingly vulnerable to organised poaching gangs, said Christian Lambrechts, director of Nairobi-based conservation group Rhino Ark.

“The situation in the last year has deteriorated. The gangs are extremely well organised and people from inside the Kenya Wildlife Service have been found to be colluding [with them],” he said.

“There is a growing realisation that private land holders do not have the ability to safeguard all of them. Rhinos cannot remain in the wild. They must be brought into sanctuaries.”

Lambrechts, a former UN Environment Programme (UNEP) officer, said up to 100 rhino could be eventually relocated in the Aberdare mountains in central Kenya, which has been surrounded by a 250 mile electrified fence built by Rhino Ark with the help of dozens of communities along its length.

“Kenya is lacking room for around 100 rhino. The Kenya wildlife service is looking to safeguard all the rhino in the country,” Lambrechts says.

But he said the Aberdare fence, completed in 2009, did not stop poachers killing two out of the eight rhinos living in the hills this year.

“Never have fences been needed more, but they are not enough. The fence has not stopped organised poaching. Fences only stop opportunistic poaching. Nor are sanctuaries the complete answer. Rhinos are being lost from inside them too.”

The problem of protectingProtection of rhinos is part of larger social and economic problems facing Kenya and other countries, Lambrechts said.

Unless conservation grapples with issues such as corruption and economic development, it is unlikely to succeed. The past two years had seen benefits for other wildlife in the Aberdare range and improvements in the condition of the forests and the catchment areas of rivers that provide much of the water needed by Nairobi and Kenya’s expanding cities.

According to a UNEP study, the Aberdare fence, which cost £6.5m, provides benefits in “goods and services” worth £50m a year for 4 million people who live on the foothills and high slopes of the Aberdare range, where 30% of Kenya’s tea and 70% of its coffee is produced.

The number of charcoal kilns has greatly reduced and there are far fewer cattle in the forests, said Lambrechts.

“Not only have other animals, like the bongo, recovered their populations since the fence was completed in 2009, but there has been a reduction in illegal felling of timber. Land values have increased, there is less contact between humans and wildlife and so less disease, and cattle rustling has stopped,” he said.

“People living by the fence have found they can now harvest crops right up to it. It also gives their families security. Children can go to school without fear of encountering elephants and other wild animals.”

The Kenyan government, aware of the importance of its five “water towers” – upland areas that provide 90% of Kenya’s fresh water – is working with the group to erect similar fences around degraded Mount Kenya and Mount Eburu. More than 25 miles of the 258 mile Mount Kenya fence has been constructed and it is expected to be complete within 10 years.

The Mount Eburu fence will be more controversial than the others, however, because it encircles illegal settlements and will regulate charcoal burning and tree felling. About 2,500 families have been evicted and resettled.

“It’s a hot issue,” said Lambrechts. “There had been a free-for-all, with charcoal burners and illegal loggers. Charcoal burning will not be stopped but people will now need permits. The evictions were done sensitively and were pretty well organised. People moved ahead of the date they had to and went back to their families.”

Other conservationists say fences may work in some areas but not others. Cathy Dean, director of Save the Rhino International, said: “I worry that fencing a wilderness area seems like a retrograde step, or an admission of defeat. What happened to deploying well-trained, equipped and motivated rangers, and outreach to local communities to bring them onside? – though I accept that the big bucks now paid for rhino horn means it’s possible to corrupt many.

“The fear is that we will end up with just a few rhino populations in a highly militarised place. That is not attractive.”

Lambrechts does not see the Kenyan fences as a return to the “fortress” conservation model pioneered in Kenya in the 1980s by Richard Leakey. This involved fences and armed patrols shooting poachers on sight but was shown to alienate communities, and often led to resentment of animals and landowners.

“The difference between this approach and the old model of ‘fortress conservation’, is that everything is now done for the community. In the old days it was against people. Now it’s with people. The fences are built by them, maintained by them. People respect them. If people did not want a fence, they would just tear it down.”

This article was written by John Vidal for the Guardian.