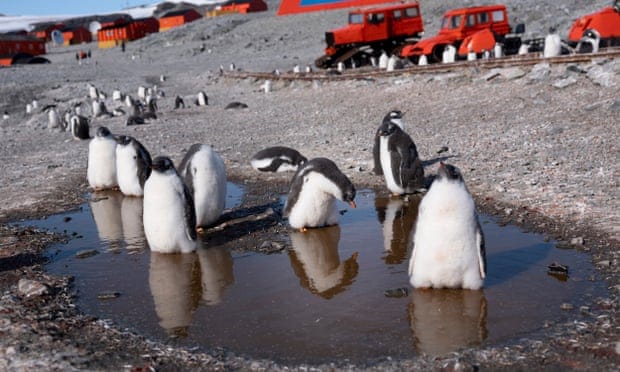 Corals will bleach, penguins will lose their Antarctic ice floes, puffins around the UK coast will be unable to feed their young, and the black-headed squirrel monkey of the Amazon could be wiped out if the world fails to limit global heating to 1.5C above pre-industrial levels.

Beyond a 1.5C rise, many species will face increasing problems finding food or surviving, according to a report from WWF on the effects of climate breakdown on 12 key species across the world.

In the UK, puffins are facing increasing threats from warming seas. Sandeels form a large part of the seabird’s diet, and the sandeels depend on crustaceans called copepods.

Now, however, warming seas mean copepods are blooming before the sandeels hatch. As the sandeels miss out on their meals, there are fewer for puffins to catch, and entire colonies can fail as a result.

WWF found that between 2000 and 2016, copepods were blooming nearly 20 days earlier than sandeel larvae were hatching, a mismatch likely to widen at higher temperatures.

The report found that the effects of global heating, which has already reached more than 1C above pre-industrial levels, could already be seen in the UK.

For instance, mountain hares in the Highlands of Scotland grow white coats for camouflage in winter, but the snow is melting earlier, before their coats have returned to brown, leaving them exposed to predators.

While warming of 0.5C above current levels may seem small, the report found the effects would be harmful to a wide variety of species, including snow leopards, hippos, monkeys and frogs, sea turtles and coral. Leatherback turtles are sensitive to even slight changes in temperature, as the sex of the turtle is determined while the egg incubates in the sand – hotter sand means more females and not enough males, and can mean eggs fail to hatch at all.

The report also examined the fate of the black-headed squirrel monkey of the Amazon, which lives in a flood plain, so a single large flooding event – of the kind forecast to become more frequent at 1.5C – could wipe out the whole population.

Mike Barrett, the executive director of science and conservation at WWF, said the climate crisis was adding to a huge loss of wildlife: global wildlife populations have already plummeted by 68% since 1970. “Nature is our life support system, and its continued destruction is not only devastating local wildlife and communities, but creating a hotter, less stable planet, putting our very survival at risk,” he said. “This isn’t a far-off threat: the impacts of climate change are already being felt and if we don’t act now to keep global warming to 1.5C we will slider faster and faster towards catastrophe.”

WWF also found that protecting vital habitats would be essential to stop warming exceeding 1.5C. The more landscapes are denuded of vegetation and their complex ecologies, the faster the climate crisis is likely to take hold. For instance, degraded and polluted marine environments mean the seas can absorb less carbon, deforestation destroys carbon sinks, and the drying out of peatlands and wetlands releases more carbon dioxide into the air.

Tanya Steele, a chief executive at WWF, said the report showed why governments needed to strengthen their pledges on cutting greenhouse gas emissions before the crunch UN climate talks (Cop26) to be held in Glasgow this November. Many countries, including the UK and US, as well as the EU, have already promised steep cuts in emissions by 2030, but taken together, these would still lead to a rise of 2.4C by the end of this century, according to estimates.

Steele said: “World leaders must seize the chance at Cop26 to build a greener, fairer future – one with nature at its heart. As hosts, the UK government needs to show it can deliver on its ambitious climate targets by publishing a credible action plan without delay, outlining the steps it will take to cut harmful emissions and reach net zero. Ministers must also recognise nature’s vital role in helping to deliver a 1.5C world and urgently scale up efforts to protect and restore nature at home and overseas.”

This article was first published by The Guardian on 2 June 2021. Lead Image: Gentoo penguins at the Argentinian research base Esperanza in Antarctica. Photograph: Abbie Trayler-Smith/Greenpeace.