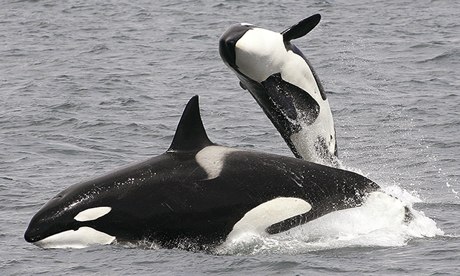 Just like humans, killer whales experience menopause – and the rare evolutionary trait improves their offspring’s chances of survival, according to experts. Killer whales are one of only three species able to continue living long after they have stopped reproducing. This allows mothers to spend the rest of their life looking after their offspring.

Scientists are investigating why the animals evolved this trait. Researchers, from Exeter University and York University, have secured funding from the Natural Environment Research Council (NERC) to analyse a dataset of more than 550 killer whales recorded over 30 years.

The dataset, compiled by the Centre for Whale Research in the US, contains birth and death dates as well as details of the genetic and social relationships in two populations of killer whales, which share their menopausal trait with only humans and pilot whales.

“Our main aim is to understand why these killer whales have a menopause strategy that’s so similar to humans. Female killer whales stop reproducing in their 30s or 40s but live until they are 90,” said Dr Darren Croft of Exeter University, a lead investigator on the study.

The researchers believe the reasons for the menopause in killer whales lie in their unusual social structure.

The mothers take a leading role in the whales’ 40-strong family groups after they stop producing eggs, and share their expertise of when and where food will be available with their younger relatives.

“The possible benefits of menopause for killer whales are that the mothers can care for their children and grandchildren and avoid reproductive competition with their daughters,” said Croft.

In a previous study, published in the journal Science last year, the researchers showed adult males have a 14-fold increase in mortality risk the year after their mother dies.

They hope to once again look at postmenopausal mothers’ effects on their sons’ survival chances and test the idea that competition for resources puts pressure on females that have already had offspring to stop reproducing.

“We will look at how the social structures and social behaviour of the whales influences the evolution of menopause and the animals’ survival,” said Dr Dan Franks of York University, who is also leading the study.

This article was written by Mark Riley Cardwell for the Guardian.

Enlightening article about why "Grand-parenting" is a great survival trait for an entire species. Thanks SO MUCH for this article.