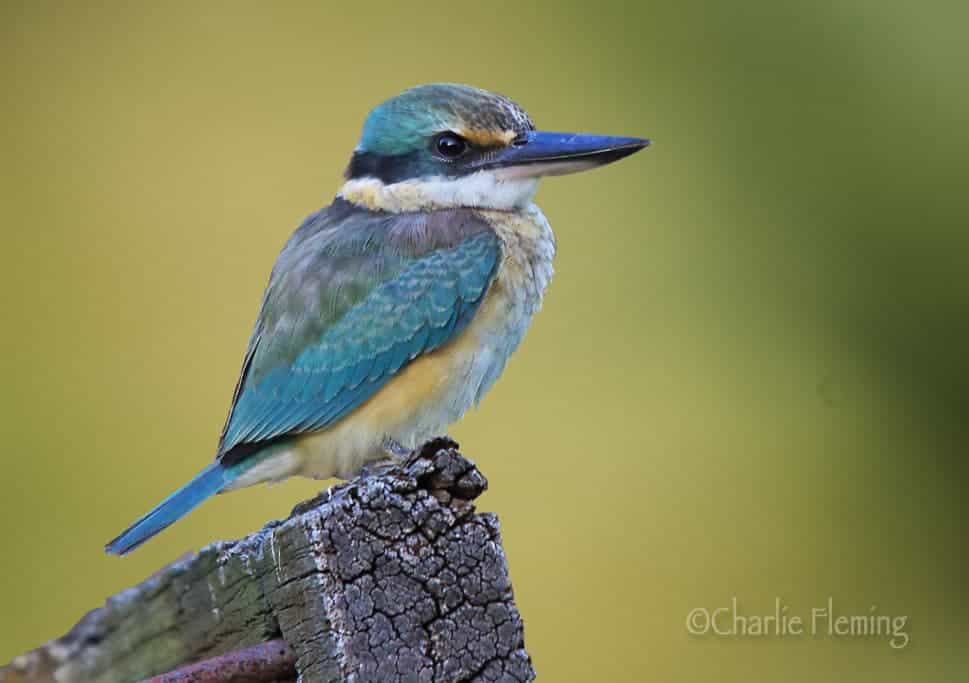 In the last few years I have been fortunate enough to have visited four continents, (if you include my home in Europe) and in the next few days I am off to Africa, my fifth! In the UK the Common Kingfisher is a protected species and I am fortunate enough to have a license to photograph this species at the nest where it is prohibited to do so without this license. I am, therefore, always attracted to Kingfishers wherever I go and I spend as much time as I can trying to photograph them at home and abroad. So far, I have managed reasonable photographs of seven different species and record shots of two others and prior to the advent of good digital cameras, I saw a few more. In Africa I will be hoping to add the Malachite Kingfisher to my collection, this will be a new bird for me and I am very excited at the prospect of adding it to my galleries.

Perched on a gravestone in the Townsville Belgium Cemetery this is a Forest Kingfisher – Todiramphus macleayii. It was feeding at first light on insects and reptiles attracted to the warmth of the masonry. I found it quite strange at the time to see kingfishers in arid conditions feeding on grasshoppers and lizards rather than diving in to water for small fish.

The Blue-winged Kookaburra -Dacelo leachiiis a large Kingfisher species, again it feeds away from water on reptiles and the like, including snakes and larger lizards. This one was a nuisance around a picnic area in North Queensland, grabbing meat and other items from the picnickers when their backs were turned. Quite a lot of fun to watch. This is a female.

A very common Kingfisher in parts of Eastern Europe, Africa and Asia is the Pied Kingfisher. This is a “river” kingfisher and feeds by hovering high above the water before plummeting down on to their prey. This one was hovering in typical fashion one early morning in Sri Lanka.

Continuing the “theme” of hovering, the Belted Kingfisher from North America is a medium sized Kingfisher, again a “river kingfisher” that will hover from time to time but also sights it’s prey from a suitable perch before diving to catch it’s fish prey. This is one of those few species where the female is more colourfully marked than the male.

The White Throated kingfisher is another species found in India and other parts of Asia as well as parts of Eastern Europe and the Middle East including Israel.

Finally, the Common Kingfisher – Alcedo athis is the bird that I am most familiar with and I have a gallery of literally hundreds of images of this species. Last spring the nesting pair that I was fortunate to be licensed to photograph were twice washed out of their nest burrow in the bank-side of a my local river. Eventually they chose a new site which unfortunately I couldn’t locate but I know that they bred successfully as I watched youngsters in the locality later in the season.

Charles Fleming is a wildlife photographer and nature blogger based in South West England. His blog "Wildlife in a Suburban Garden" has more than 1400 entries and a link to his galleries where you can view more than 4000 images from home and abroad, including a gallery of birds of the world featuring photographs of more than 500 species. "My aim is to try and put my readers and viewers intimately close to the subject and to share the thrill of watching and photographing birds and wildlife at close quarters".

Charles Fleming is a wildlife photographer and nature blogger based in South West England. His blog "Wildlife in a Suburban Garden" has more than 1400 entries and a link to galleries where you can view more than 4000 images from the UK and the rest of the world featuring photographs of more than 500 species. "My aim is to try and put my readers and viewers intimately close to the subject and to share the thrill of watching and photographing birds and wildlife at close quarters".

Charlie, outstanding collection of Kingfisher images – some of which I’ve never seen before – thanks for sharing. I took the liberty to add titles and captions, so that they show up on the slideshow – hope it’s OK with you.