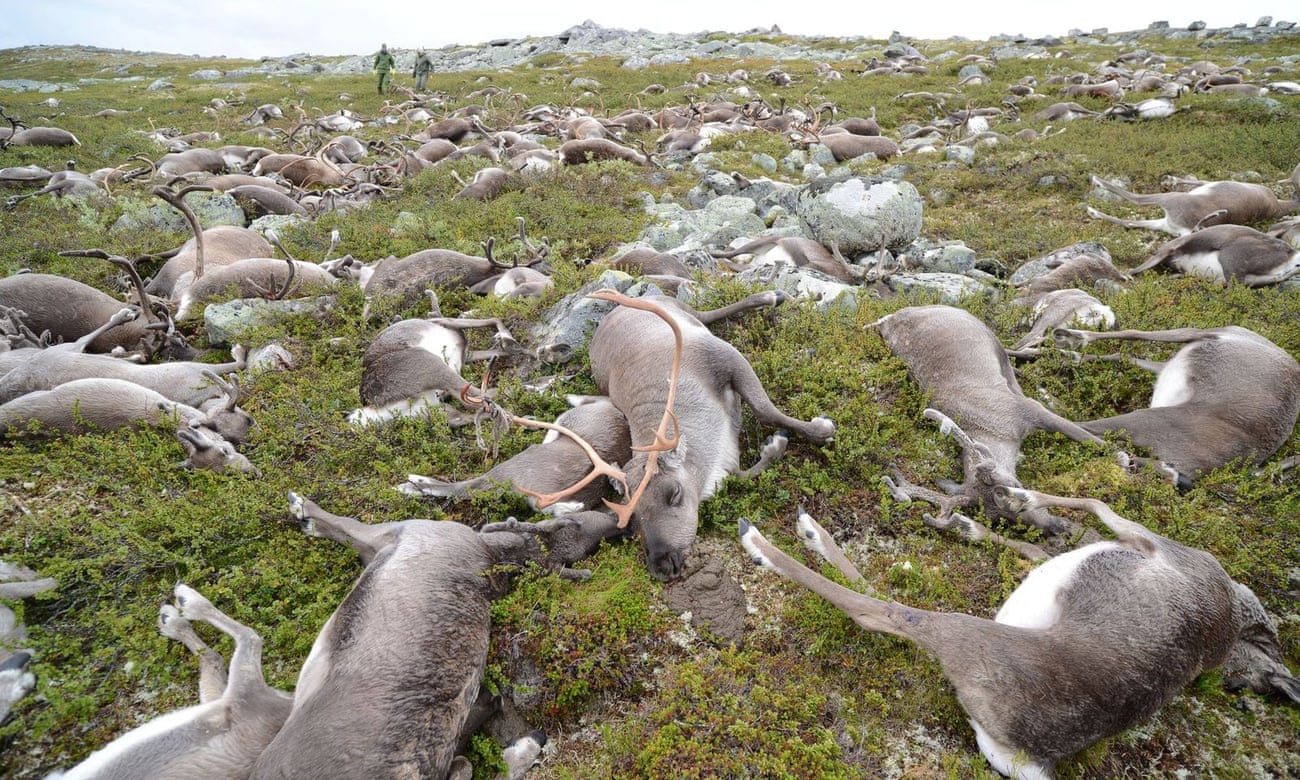 In August 2016, a park ranger stumbled upon 323 dead wild tundra reindeer in Norway’s remote Hardangervidda plateau. They had been killed in a freak lightning event. But instead of removing the carcasses, the park decided to leave them where they were, allowing nature to take its course – and scientists to study this island of decomposition and how it might change the arctic tundra ecosystem.

Over the years scientists observed the bloated, fly-infested bodies turn into dry skeletons. The latest paper, published by the Royal Society in June, looked at the creation of a “landscape of fear”, as top predators such as wolverines, golden eagles and arctic foxes took advantage of the carrion.

“The landscape of fear framework has provided a better understanding of animal decisions in relation to food and safety trade-offs, predator–prey relationships and how communities are structured across trophic levels,” it concluded.

With laws in place in Europe meaning carcasses have to be removed in most instances, most people will never see this kind of death and decay.

“When we were first there it was a little bit solemn,” lead researcher Shane Frank from the University of South-Eastern Norway in Bø says of the Hardangervidda plateau. “It was sad to see that much life snuffed out so quickly.”

Scientists set up camera traps, recorded faeces and observed the wildlife flocking to the carcasses on the plateau, which is 1,220 metres above sea level and a three-hour hike from the nearest town of Liseth in Hardanger. “Over time, as the reindeer decomposed we gained some distance from that ‘death’ feeling. We were also learning so much, in a way giving meaning to it, and it felt like that was an offsetting factor to that solemnity … It’s silly to deny death as part of life,” says Frank.Scavenger birds such as ravens, crows and eagles visited the highest density of carcasses in 2017 and then were nearly absent in 2018.

The reverse was true of rodents (such as root vole, lemming, bank vole and field vole), which were absent from the site in 2017 and then were everywhere in 2018. Scientists believe rodents were too fearful to go to the site while these larger birds were around.

Carcasses are interaction hotspots, but not all interactions are positive: “It’s kind of like, here’s a buffet, you’ve got a lot of hungry folks coming in to eat, and maybe they don’t like one another very much,” says Frank.

Another discovery was that non-scavenger birds such as the meadow pipit, northern wheatear, common reed bunting, bluethroat and lapland bunting all fed on the “bloom” of arthropods, such as blowfly, that developed on the carrion. Meadow pipit were the most common, with up to 80 individuals feeding on the site at once.

“The fact that passerines forage on insects at animal carcasses is not a unique phenomenon, but only a few examples exist in literature,” scientists wrote in another paper on the reindeer carcasses published in Ornis Norvegica in December. Further study of how these non-scavenging birds could benefit from carcasses could help conservation efforts.

Rotting bodies also change flora. Surrounding the 323 reindeer carcasses were seeds of crowberry – a keystone species of alpine tundra – that scavengers were dropping around the site. Out of 24 faecal samples from crows, 21 contained viable crowberry seeds, according to a study published in Biology Letters in 2018, that suggests seed banks are likely to build up around carcasses.

It is now widely accepted that leaving dead wood in forests benefits many species, but leaving carcasses is still taboo. This, along with concerns about the spread of disease, means there has historically been little research on how carrion returns nutrients to ecosystems. Frank says: “We’ve been focusing on animals when they’re alive, where they go, and where are they moving. I don’t know if it’s something about mortality, culturally, from the western perspective, that we’re a little bit averse to. I think people are now kind of warming up to cold bodies, at least in wildlife research. Everything is connected, and circular.”

With the escalating climate crisis and increased frequency of extreme weather, mass mortality events, such as the deaths of the reindeer in Hardangervidda, will probably become more common. The Australian bushfires, for example, are estimated to have killed more than 800m animals (excluding frogs, insects and other invertebrates), which will cause long-term changes in ecosystems. Unseasonably warm weather in Kazakhstan in 2015 caused a normally harmless pathogen to wipe out 200,000 saiga antelope in a few weeks, and 1m seabirds starved to death in 2015-16 because of a giant “blob” of hot ocean around north America.

Two decades ago, our understanding of the importance of scavenging was more limited. Now, experts from different disciplines are identifying research opportunities linked to the study of death in the landscape, says zoologist Marcos Moleón from the University of Granada in Spain. He believes we are in “the golden age of scavenging research”, with increasing recognition of the key functions scavengers play in terrestrial and aquatic environments. Looking at scavenged prey means we understand connections and interactions in food webs better, and how they create stable ecosystems. “Especially important are those scavengers that may perform long-distance movements and distribute nutrients over large spatial scales, such as vultures and large mammalian predators,” he says.

This doesn’t translate into policy – carcasses are left to rot in Europe only in exceptional circumstances, such as when they provide food for rare scavengers such as vultures. Large mammals that graze nature reserves are generally considered domestic, so their bodies are removed once they have died.

One famous exception is herbivores introduced to the controversial Oostvaardersplassen nature reserve, east of Amsterdam in the Netherlands. The rewilding experiment – known as the Dutch Serengeti – caused outrage after thousands of red deer, Konik horses and Heck cattle starved in the winter, partly because of the absence of predators such as wolves. Carcasses were left outside in public view, with many protesters condemning the project as “animal abuse”.

Research published in the science journal Plos One in January suggests the red deer carcasses benefited biodiversity in Oostvaardersplassen. After near-complete decomposition, plant biomass surrounding them was five times greater than usual, leading to an increase in plant-eating invertebrates and therefore an increase in predators. This bloom of life lasted for months and spread through food chains – even creating scrubby areas and heterogeneity in the landscape, scientists found.

We’ve been focussing on animals when they’re alive. I think people are now kind of warming up to cold bodies, at least in wildlife research
Shane Frank

Lead researcher Roel van Klink from the University of Groningen in the Netherlands said carcass ecology played an important part in the “rewilding” of the reserve: “Obviously, because there is a carcass lying there large grazers, such as deer, avoid grazing around it because they know it’s unhealthy. You then get this huge bush of thistles. Hypothetically, scrub could start growing here and then trees, and eventually you could potentially have a completely different landscape.”

However, owing to strong animal welfare concerns, leaving carcasses to decompose is now seriously controlled. The Dutch state forestry service says large herbivore populations should not exceed 1,100 animals in Oostvaardersplassen (there were 2,855 at one point) and only around 30 to 40 deer carcasses are left out over the winter.

Various nature organisations are working together to recover cadavers in the landscape as part of the Dutch “dood doet leven” (death makes life) programme. The organisation believes policy change is vital if scavengers such as red kite, black kite and monk vulture are to return to Europe. Leaving out dead trees and animals transforms the landscape for the better, it argues. Van Klink says: “We could have many more large raptors, like white-tailed eagles everywhere from the UK to Germany to Poland, if there was much more carrion lying around. Many large raptors would love it.”

In Hardangervidda – the largest plateau in Europe – carcasses are likely to be benefitting biodiversity and creating heterogeneity in ecosystems. However, in more densely populated parts of Europe, the sight of death in the landscape remains problematic. Despite an increasing body of research showing the importance of scavenging in food webs, farmers and vets also remain extremely concerned about the potential for disease to spread, and so leaving out carrion is unlikely to be acceptable in the wider landscape any time soon.

Van Klink says it is an “uphill battle” to make leaving out carcasses more acceptable on nature reserves. “Progress is slow and will be local, but there is definitely some progress. We just need to keep pushing,” he says.

This article was first published by The Guardian on 8 July 2020. Lead Image: In August 2016, 323 wild tundra reindeer were killed in a freak lightning event on Norway’s Hardangervidda plateau. Photograph: Olav Strand.