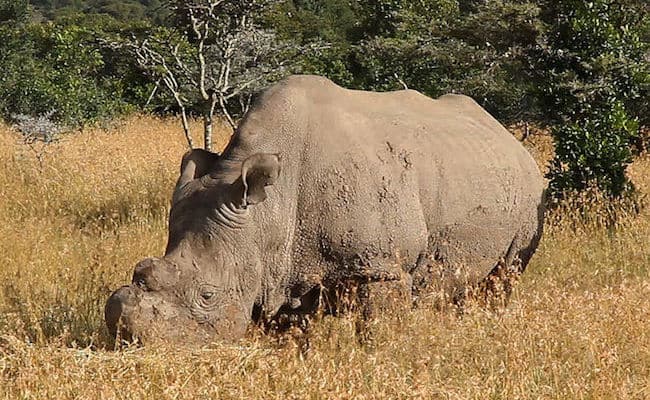 For those of you who are single and ready to mingle, perhaps you’ve tried online dating. One popular dating app, Tinder, currently lists a rather attractive male ISO of his forever mate.

Talk about a catch! Oh, and he just happens to be the world’s last male northern white rhino. His species has been virtually wiped out by poachers.

Some of you may recognize him from the description. I’m talking about Sudan, the white rhino who lives at Kenya’s Ol Pejeta Conservancy with a 24/7 armed security detail by his side.

Sudan ‘joined’ the Tinder dating app as a last-chance breeding effort by wildlife experts to keep his species alive.

Apparently Sudan attracted quite a draw because the conservancy’s website had crashed at one point.

With the help of a friend who uses Tinder, I tried finding Sudan’s profile to share with you, but as it turns out–it’s pretty hard to seek out a particular user. (Think online stalking.) I’m not a savvy online dater, but that makes sense to me.

But this press release gives us a peek at his profile: “I don’t mean to be too forward, but the fate of the species literally depends on me” and “I perform well under pressure.”

Matt David, head of communications and marketing at Tinder, says, “We partnered with Ol Pejeta conservancy to give the most eligible bachelor in the world a chance to meet his match,” adding, “We are optimistic given Sudan’s profile will be seen on Tinder in 190 countries and over 40 languages.”

It doesn’t take a genius to figure out that Sudan is not likely to find his soul mate on a dating app. The true intention here is to raise awareness about the dire state of the northern white rhinos and to raise funds for conservation efforts.

It’s all part of a campaign called “The Most Eligible Bachelor in the World,” a joint effort by Kenyan wildlife conservancy Ol Pejeta and Tinder.

According to the official announcement, 43-year-old Sudan and his last two female companions (Najin and Fatu) all live at the protected conservancy. But they are unable to breed naturally because of issues that include old age.

The untraditional effort aims to raise $9 million for research into breeding methods, including in-vitro fertilization, in an effort to save the species from extinction.

The ultimate outcome of all this, according to Richard Vigne, the conservancy’s chief executive office, is “to reintroduce a viable population of northern white rhino back into the wild, which is where their true value will be realized.”

He calls it “the last option to save the species” since all previous breeding attempts proved futile.

The group of international zoological experts working on reviving the northern white rhino population met in early March to discuss next steps. Here’s where things stand:

“For the past two years, experts have been developing a technique known as ovum pick- up (OPU) on southern white rhinos, which involves the collection of eggs from females. While the first stages of embryonic development have been achieved already, scientists now face the challenge of keeping the cells alive long enough to mature and be fertilized, so that they develop into embryos suitable for transfer.”

Research is currently ongoing in the United States, Germany and Japan. Word on the street is that scientists are optimistic that they can harvest and mature oocytes from the last northern white rhinoceroses in 2017. The hope is to establish a herd of 10 northern white rhinos after five years using in-vitro fertilization.

If they are, then yes, the northern white rhino is on the verge of extinction. But if you rope them in together, then the population numbers around 20,000–a much easier figure to swallow.

Richard Emslie, Ph.D., rhino specialist for the International Union for Conservation of Nature (IUCN) explains, “Part of the issue comes down to how you define different species.” IUCN is the worldwide organization behind the Red List of Threatened Species.

As for Sudan, is classifying him ‘Most Eligible Bachelor’ on Tinder an advertising gimmick? Obviously. I mean–have you ever met a rhino who used a dating app to meet their mate? Or any animal besides humans, for that matter?

But it’s for a good cause. No–make that a great cause. Imagine being the last of your entire species.

Capturing Sudan’s loneliness in words is this poignant portrayal published by the Guardian in 2015:

“Sudan doesn’t know how precious he is. His eye is a sad black dot in his massive wrinkled face as he wanders the reserve with his guards. His head is a marvellous thing. It is a majestic rectangle of strong bone and leathery flesh, a head that expresses pure strength. How terrible that such a mighty head can in reality be so vulnerable. It is lowered melancholically beneath the sinister sky, as if weighed down by fate. This is the noble head of an old warrior, his armour battered, his appetite for struggle fading.”

So you have an accurate picture—Sudan is hornless. His horn was cut off at one point to deter poachers. While that may have saved his life, it will take much more to save his species.

If you want to do something to help Sudan and his species, share his story, because he can use all the support he can get.