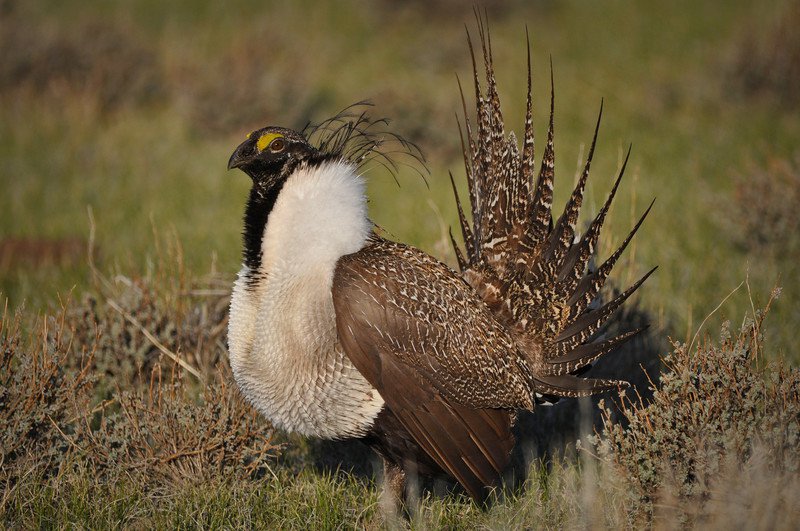 SAN FRANCISCO― Conservation groups filed a formal notice today of their intent to sue the Trump administration for failing to protect an imperiled bird, the bi-state sage grouse, under the Endangered Species Act despite ongoing population declines.

The bi-state sage grouse is a geographically isolated, genetically distinct population of greater sage grouse, which are famous for their showy plumage and comical mating dances, during which the males make popping sounds with large, inflated air sacs.

It lives only in an area along the California-Nevada border and faces multiple threats. Population declines are particularly acute at the northern and southern ends of the birds’ range.

“The Trump administration has to be forced to step up,” said Ileene Anderson, a senior scientist at the Center for Biological Diversity. “We’ve watched for more than a decade as voluntary measures failed to do enough to help these birds survive. Without the legal protection of the Endangered Species Act, multiple threats will just keep pushing these unique grouse toward extinction.”

It was originally proposed for listing as threatened in 2013, but the Fish and Wildlife Service abandoned the proposal in 2015. In 2018 a federal court found the agency had wrongly denied Endangered Species Act protection to the bi-state sage grouse and required it to re-evaluate the bird’s situation. The bird was again proposed for protection, but in March 2020 the administration withdrew its proposal.

The Fish and Wildlife Service claims its reversal is based on a collection of voluntary conservation measures, but many of those measures have been in place for more than a decade, while the sage grouse continued to decline.

“Most of the bi-state sage grouse populations are tiny, isolated groups that are under imminent threat of winking out,” said Laura Cunningham, California director of Western Watersheds Project.

“Instead of substantive legal protections for sage-grouse habitat from livestock grazing and mining, the Trump administration is instead pushing removal of more and more old-growth pinyon-juniper woodlands that provides no benefit to the birds. The Service is utterly failing in its duty to preserve and protect sage grouse.”

“The U.S. Fish and Wildlife Service ignored major threats facing these rare birds,” said Taylor Jones, an endangered species advocate with WildEarth Guardians. “The surviving bi-state sage grouse subpopulations are tiny, isolated and face imminent threats. There is no credible excuse for denying them the protections of the Endangered Species Act.”

Sage grouse populations in California and Nevada are isolated from other sage grouse by unsuitable habitats and former habitat that has been heavily developed. The bi-state sage-grouse populations together are estimated to be no more than 3,305 birds, far below the 5,000-bird threshold scientists consider the minimum viable population.

Efforts to protect the birds, including flagging of barbed-wire fencing in cattle and sheep operations in an attempt to mitigate sage grouse collisions, and vegetation treatments, have failed to stem their decline.

Federal scientists predict localized extinctions in the north and south ends of the range. Scientists also estimate occupied habitat has decreased by more than 136,000 acres over the past 11 years.

Bi-state sage grouse are found on lands originally inhabited by the Washoe and Paiute peoples.