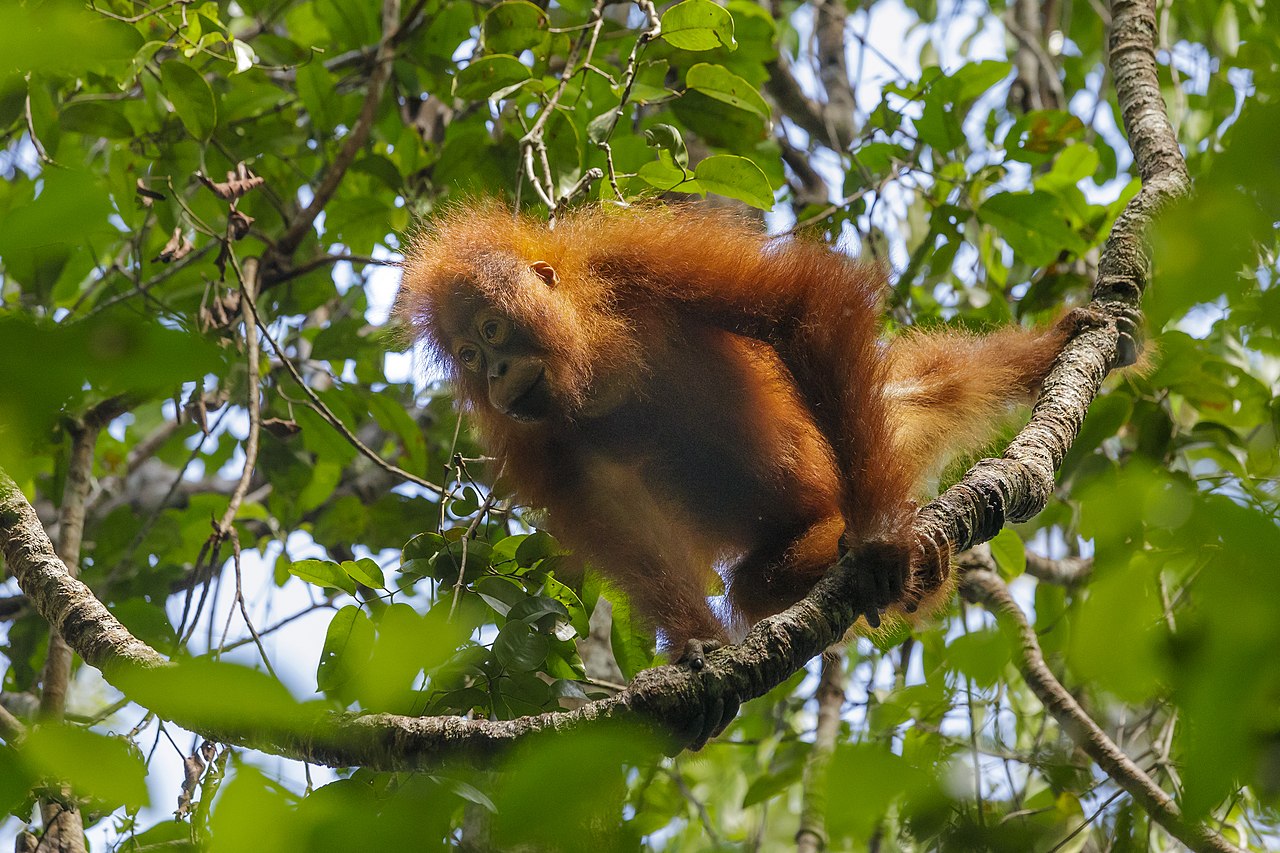 JAKARTA — Orangutans in Borneo have been found to physically waste away when fruit is scarce — a finding with dire implications as human-driven climate change and the destruction of their habitat put their food supply under even greater threat.

In a study recently published in the journal Scientific Reports, researchers collected and analyzed urine samples from Bornean orangutans (Pongo pygmaeus) in Indonesian Borneo to measure the change in their muscle mass between periods of fruit abundance and fruit shortage. Specifically, they looked for creatinine, a waste product formed when muscle breaks down, from 1,130 urine samples collected from 70 orangutans at the Tuanan research station in Central Kalimantan province from 2009 to 2017.

The study, the first to examine estimated lean body mass in wild orangutans, found that the apes’ muscle mass was significantly lower during periods of low fruit availability.

What’s surprising is how this phenomenon was detected consistently across all age-sex classes, even though orangutans are known to have a tendency to store fat, according to lead author Caitlin A. O’Connell from Rutgers University in the U.S.

“We thought some types of individuals might be driven to muscle catabolism sometimes while others may be more buffered from experiencing muscle wasting,” she told Mongabay in an email. “Especially because orangutans are thought to be particularly good at storing fat to be utilized for energy during low fruit periods.”

The study identifies the rainforests of Southeast Asia as “challenging habitats” for fruit-eating vertebrates, with food availability “particularly limited” in Borneo. That’s led Bornean orangutans to evolve a survival mechanism in which they tend to store fat and have an extremely low metabolism. The only other mammals with a lower measured metabolic rate are sloths and giant pandas.

This has meant that orangutans in captivity have a high tendency to become obese. This phenomenon — building up fat reserves during periods of fruit abundance and then shedding it during fruit scarcity — sets orangutans apart from the other great apes.

But often this isn’t enough of a hedge for lean times. The study found that orangutans can go into starvation mode, where they burn through most of their fat reserves and start burning their own muscle mass. While this was an expected outcome for adult female orangutans, whose energy demands surge during pregnancy and lactation, the researchers didn’t expect to also see it across the population.

“Instead, we found that all of them, from big males to young individuals, had lower estimated lean body mass when fruit was low,” O’Connell said.

The findings indicate that any further disruption of the apes’ fruit supply could threaten their very survival. And that’s an increasingly real threat as these critically endangered primates continue to lose their habitat to deforestation driven by logging and land clearing for oil palm and pulpwood plantations. In fact, loss of habitat has been identified as the leading cause of orangutan population decline in recent decades.

Conservationists and policymakers need to keep in mind the long-term needs of orangutans by considering the availability of fruit in forest patches or corridors that the apes may need to occupy as deforestation spreads across their range, O’Connell said.

“An area that is sustaining orangutans at one point in time may not be able to sustain them later on,” she said. “Whether it is because of natural fluctuation or anthropogenic changes, we need to assess whether forest areas are large enough and contain enough orangutan foods to get them through both high and low fruit periods.”

Similarly, rehabilitant and translocated orangutans may require long-term monitoring after release to ensure they can survive through periods of low fruit availability, O’Connell added.

She said the methodology for the study — the simple and non-invasive analysis of urine, which can be collected from wild or captive orangutans — can be used in future research in order to get a better understanding of orangutan conservation physiology.

“Just how dire is the situation when an orangutan starts catabolizing muscle?” O’Connell said. “We can learn more about this by examining estimated lean body mass with other health measures in the future.”

This article by Hans Nicholas Jong was first published on Mongabay.com on 31 May 2021. Lead Image: Bornean orangutan (Pongo pygmaeus) in Tanjung Puting National Park, taken during a photo trip to Indonesia in 2018. Image courtesy of Thomas Fuhrmann/Wikipedia Commons.