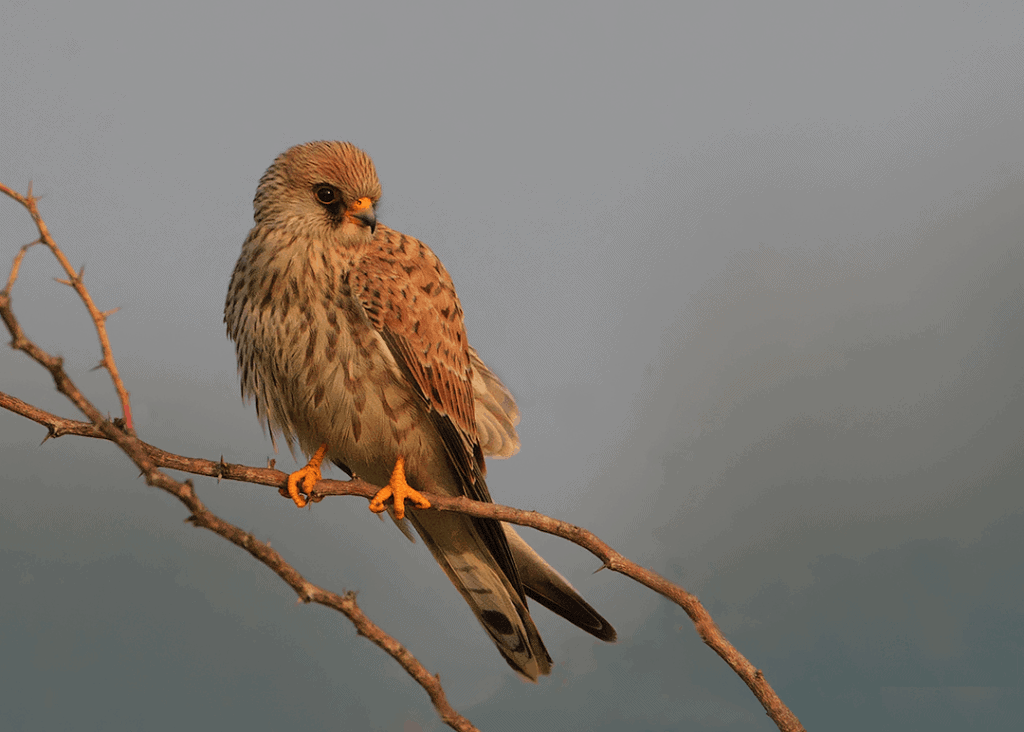 Armed with telescopic lenses, 24 West Bank photographers took to the Jerusalem wilderness for a two day photoshoot, zooming in on Palestine’s Lesser Kestrel Falco naumanni. Sponsored by the Middle Eastern HIMA Fund, these passionate paparazzi snapped over a thousand pictures, framing the small falcon for future generations to admire.

This photogenic initiative was part of a creative conservation package put together by Imad Atrash, Executive Director of the Palestine Wildlife Society (PWLS, BirdLife Partner) and his team. An artisan and agriculture event, breeding surveys and educational and conservation awareness activities were among a spectrum of initiatives that made up the initial kestrel conservation kit.

Serendipity triggered the photoshoot. This snappy idea was the brainchild of two men who, independently of each other, searched for novel ways to further their cause. While Atrash was contemplating ways to draw attention to the plight of the Lesser Kestrel, Firas Jarrar, Chairman of the group of Palestinian Assembly for Photography and Exploration (PAPE), was exploring ways to enrich the portfolio of the group’s members. Nature photography, he concluded, was still an underdeveloped skillset of many of its members and it was time to boost this expertise.

And so, one fine Friday afternoon last Spring, Atrash, a keen amateur photographer himself, invited the group to a workshop. Consisting of Palestine West Bank professionals (doctors, engineers, students), the group was taught every birdwatcher’s ABC (how to observe, which bird to look out for, how to distinguish it from others and where to find it) and told how their work would help support the falcon’s recent population growth.

Although positive, the Lesser Kestrel’s recent population climb is humble compared to the species’ previous steep decline. As is the reality for many birds, habitat loss and degradation due to increased agricultural activity, afforestation (the establishment of forest where previously there was none) and urbanisation can cause rapid reduction of numbers.

To halt this kestrel’s downfall,close monitoring and management of some of its sites and habitats on an international level have been stepped up. And not in vain: recent years have seen an increase, however slight, of numbers, a trend that has also been observed in Palestine itself.

“With the help of 120 students and an innovative birdwatching app, we observed around 30 pairs, this year,” says Atrash. While still small, the numbers are a huge improvement on the all-time low of a mere four pairs in the region, recorded several decades ago.

The good news is relative, though, as this year’s cast totals less than 10% of population numbers pre-dating the 1950s. There is still every reason to monitor this grey and rusty plumaged bird closely.

The upward trend must be sustained, an urgency Imad Atrash impressed all too well on the PAPE members in April.

The Judean desert, hostile and seemingly otherworldly to the average human, is the perfect breeding haven for the Lesser Kestrel. Against a backdrop of Mar Saba, a sand-coloured Greek Orthodox sanctuary and one of the oldest monasteries in the world, the high cliffs of this wilderness provide safe and secluded nesting sites. Just a plateau or niche is all the Lesser Kestrel requires – no need for tedious fiddling with twigs and leaves.

Contradictory as it may sound, even this arid Middle Eastern landscape is slowly being lost to agricultural expansion. As welcome as the growing number of newly planted fruit trees may be, their arrival is instantly followed by an intensified use of pesticides, killing off part of the Lesser Kestrel’s own diet as well as that of some of the bird’s other prey. Moreover, prey that feeds on sprayed vegetation will become poisonous to the next species up the foodchain. Whether instantly poisonous or accumulatively, insecticides can drastically alter food supplies and chains, an effect which is seen all over the world.

Meanwhile, underneath the expanding olive orchards, herds of cattle now roam freely and strip the wilderness of its skimpy greens. This, too, is bad news for the Lesser Kestrel, for the modest foliage provides food and shelter for reptiles, rodents and small birds. These animals coincidentally make up the healthy diet the falcon hunts down to feed its offspring. No easy feat, when your three to six chicks have an insatiable appetite.

On top of these threats, Palestine’s Lesser Kestrel has a more direct enemy to ward off: ravens not far from the kestrels’ steep cliffs. “Ravens are very much part of the Lesser Kestrel’s habitat and are its greatest threat”, Atrash explains. “They attack the much smaller falcon, but we are not sure if they are after the falcon’s eggs, are defending their own, or if their battles are merely territorial.”

A controversial landfill site bordering the reserve provides a permanent buffet for these intelligent black omnivores. They presently outnumber the Lesser Kestrel more than tenfold. Ravens have few natural predators, but their eggs are savoured by owls, martens and eagles. “Perhaps they classify the Lesser Kestrel among those”, Atrash ponders. “We are considering ways to limit the ravens’ numbers, for example by replacing their eggs with fake ones, but we haven’t explored all options yet.”

“Interestingly, although the abundance of food has increased their numbers significantly, it appears to make the ravens slightly less aggressive, too. Whatever the reason, we find that the kestrels are increasing their wins in air battle.”

Equipped with Ashad’s briefing and their own state-of-the-art apparatus, the group entered the wilderness, eternalising the already roosting kestrels with their cameras until darkness fell. They zoomed in again the next day at 6am, capturing the elegant bird in action.

“It was excellent,” says Rasheed Livdawe, one of the co-founders of PAPE. “It was my first time photographing birds in the wild and I quickly learned that the early morning hours and late afternoon work best for bird photography in terms of natural light. For two full days I watched and followed this bird. It was difficult, but very spectacular.”

Of the thousand pictures, one hundred were entered for PWLS’s photo competition. Judged on use of shadow, captured movement and animal behaviour, money prizes were awarded to the first three winning photographers. The sharpshooters’ collection forms excellent PR material that will greatly help to promote the Lesser Kestrel’s cause.

PWLS’s conservation project is one to follow, with a documentary currently in production. The West Bank in Palestine is a relatively small place and resources are limited. But proving that targeted cross-border collaboration and the exchange of expertise can trigger low-cost, effective campaigns and mutual enrichment, PWLS is given the struggling kestrel its very best shot.

This article was first published by BirdLife International on 19 Jan 2017.