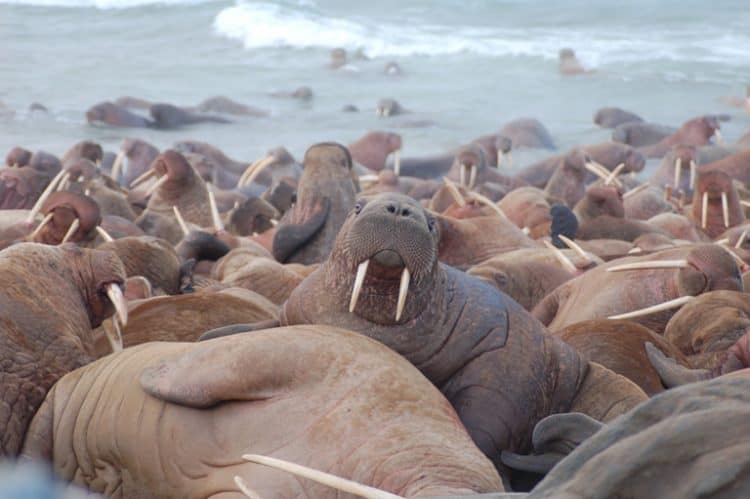 A 4-year bioacoustic study of marine mammals in the northern Bering Sea will help scientists track the impacts of global climate change on Arctic ecosystems.

“The data gathered during the study will serve as an important baseline for future monitoring of the effects of climate change, subsequent sea ice changes, and expected increases in shipping on the distribution of the region’s marine mammals,” Emily Chou, a WCS scientist and lead author of the study, said in a statement.

Chou and colleagues say theirs is the first study to conduct year-round acoustic monitoring of marine mammals off St. Lawrence Island in the Bering Sea. The research team was supported by local indigenous hunters and fishermen in deploying three acoustic recording devices. Study co-author Martin Robards, also a WCS scientist, said that working with local communities to deploy and retrieve the recording equipment was “an important part of our effort to keep the work as locally-based as possible.”

Two recorders placed off the northern shore of St. Lawrence Island, near the indigenous villages of Savoonga and Gambell, were attached to flotation devices and anchored to the seafloor with weights. The third recorder was deployed in the Bering Strait, a 36-mile-wide waterway that lies between Russia and the US state of Alaska, which serves as an important migratory route for marine mammals moving between the Bering Sea and the Arctic Ocean.

“Acoustic monitoring is the most effective means of determining the seasonal presence of these species in these challenging Arctic areas, given the unpredictable weather conditions and variable daylight and ice conditions,” Brandon Southall of Southall Environmental Associates, a California-based company, said in a statement. “It can also be used to measure variability in ocean noise from both natural and human sources, such as shipping, and how they may affect the behavior and well-being of marine mammals.”

The researchers captured more than 33,000 individual vocalizations from whales, walruses, and seals over the course of the study, which was conducted between 2012 and 2016. They say that their findings showed consistent seasonal distribution and movement patterns for most of the studied species, supporting previous scientific and traditional knowledge about the distribution of marine mammals in the northern Bering Sea, while providing more precise data than was previously available.

“We identified seasonality in call presence for all species, corroborating previous acoustic and distribution studies, and identified finer‐scale spatio-temporal distribution via occurrence of call presence between different monitoring sites,” the researchers write in the paper. “Time‐of‐year was the strongest significant effect on call presence for all species. These data provide important information on Arctic endemic species’ spatio-temporal distributions in biologically and culturally important areas within a rapidly changing Arctic region.”

These findings provide a baseline to guide future efforts to monitor the Arctic’s cetacean and pinniped species, the researchers note. They can also help inform conservation strategies for acoustically sensitive marine mammals who will be impacted by disappearing ice and increases in ship traffic as the Arctic becomes more ice-free and thus more navigable. Continued monitoring at key locations will allow scientists to observe how Arctic wildlife and ecosystems respond to human activities and long-term changes in environmental conditions driven by global warming.

“There is no doubt that the Arctic is currently undergoing rapid and significant changes that are alarming,” Dr. Howard Rosenbaum, a study co-author and director of WCS’s Ocean Giants Program, said in a statement. “Our work on Arctic marine mammal populations in this region is essential to assess any forthcoming resulting shifts or changes resulting from warming Arctic conditions, and ultimately working partners and authorities to find solution to protect these iconic species and their habitats.”

This article by Mike Gaworecki was first published on Mongabay.com on 24 February 2020.