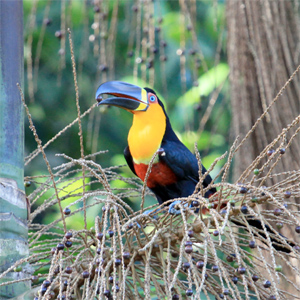 The extinction of large, fruit-eating birds in fragments of Brazil’s Atlantic rainforest has caused palm trees to produce smaller seeds over the past century, impacting forest ecology, finds a study published in the journal Science.

The researchers — led by Mauro Galetti from Brazil’s Universidade Estadual Paulista — looked at Euterpe edulis palm seeds in patches of forest that have been fragmented by deforestation, coffee plantations, and sugar cane fields since the 19th century. They found that palm trees produced significantly smaller seeds in areas of forest that are too small to support “large-gaped” birds like toucans and large cotingas. The absence of these birds means that larger seeds aren’t effectively dispersed, while smaller seeds are more vulnerable to drying out before germinating. The outlook for Euterpe edulis palms — and the species that depend on them — is therefore bleak in these fragments.

“Small seeds are more vulnerable to desiccation and cannot withstand projected climate change,” said Galetti in a statement, noting that climate models project warmer and drier conditions in the region, which has lost more than 90 percent of its forest cover.

Galetti added that while the study looked only at a single species of palm in one ecosystem, the implications are likely far-reaching.

“Unfortunately, the effect we document in our work is probably not an isolated case,” he explained. “The pervasive, fast-paced extirpation of large vertebrates in their natural habitats is very likely causing unprecedented changes in the evolutionary trajectories of many tropical species.”

“Habitat loss and species extinction is causing drastic changes in the composition and structure of ecosystems, because critical ecological interactions are being lost. This involves the loss of key ecosystem functions that can determine evolutionary changes much faster than we anticipated. Our work highlights the importance of identifying these key functions to quickly diagnose the functional collapse of ecosystems.”