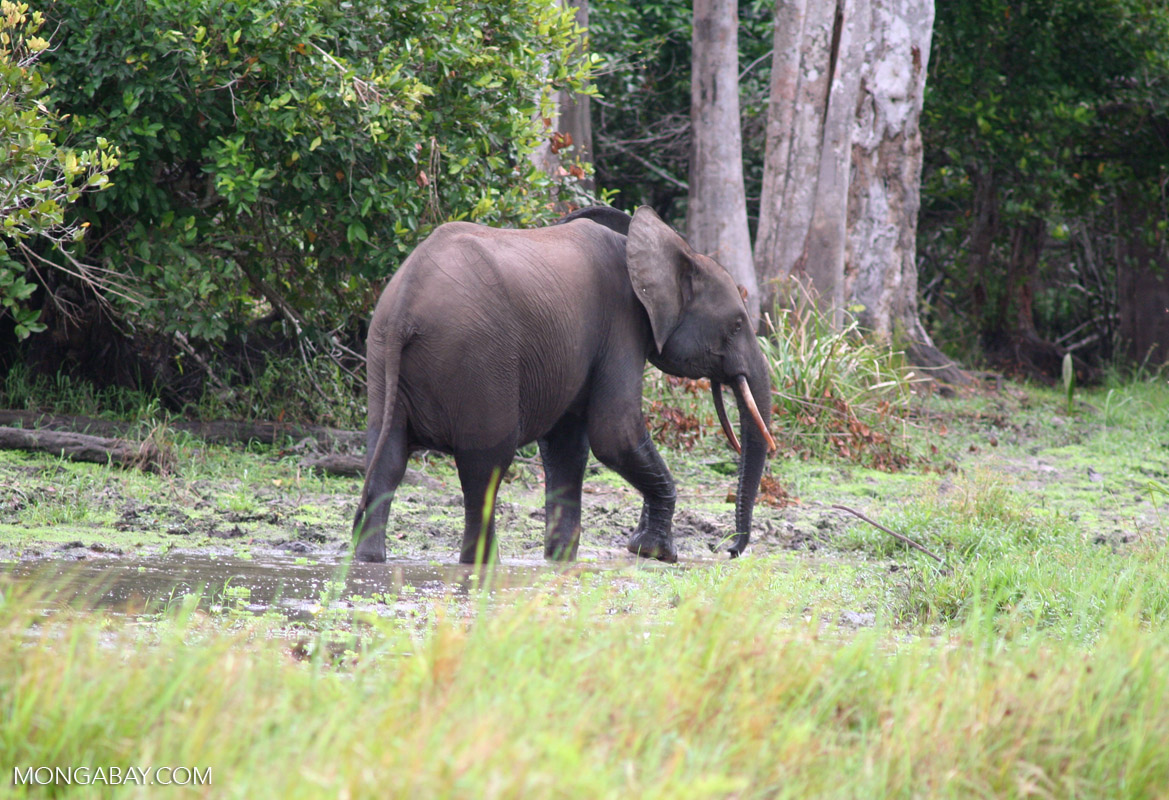 Children in every corner of the globe can identify an elephant in a wildlife lineup. They are as recognizable as any basic shape and as endearing as any household pet. Yet the same cannot be said for the hundreds of tropical flora and fauna that are liable to disappear should forest elephant populations continue to crash.

“[Elephants] have a disproportionately large impact on their ecosystem and the organisms living in it,” says John R. Poulsen, assistant professor of tropical ecology at Duke University’s Nicholas School of the Environment. “If people are aware of the potential result of losing elephants […] perhaps they can transfer that understanding to less well known species.”

Poulsen and his colleagues recently published a study in Conservation Biology examining how the loss of forest elephants would impact the rest of their natural habitat. After diligently reviewing dozens of papers on Afrotropical flora and fauna, they predict that the loss of forest elephants will reshape the ecological processes at work in their environment. Species composition will change, in addition to the size and abundance of large tree species — and, by extension, the ability of these ecosystems to store carbon dioxide.

“[The] killing of elephants for their ivory is not only depriving the world of one of its most charismatic species, but might also be making the Earth less inhabitable for humans,” Poulsen says.

A Tale of Two Species

Although many people are familiar with elephant conservation, few know that the African elephant is not one, but two distinct species: forest (Loxodonta cyclotis) and savanna (Loxodonta Africana). The two are different in their anatomy, reproduction, even their social structures.

When most people think of Africa’s elephants they are actually picturing savanna elephants: those that live out in the open, in places like the Serengeti, and are therefore easier to study. Forest elephants are comparatively smaller and weave their way through vibrant Afrotropical forests, such as in the Congo, forging elephant-wide paths as they do so. Scientists looking at genetic markers estimate the two species split between 2 million and 6.5 million years ago; humans and chimpanzees, by comparison, diverged between 5 million and 7 million years ago.

Despite such differences, the International Union for Conservation of Nature (IUCN) does not currently recognize forest and savanna elephants as distinct species. Both fall under the title of African elephant.

“The two-species question is pretty much accepted by the taxonomists but has yet to be officialized by IUCN,” says Fiona Maisels, surveys and monitoring adviser at the Wildlife Conservation Society (WCS) in Gabon.

Scientists generally define species as a group of organisms that can successfully mate and produce fertile offspring. The primary holdup in the case of the African elephant is that forest and savanna elephants can interbreed and produce fertile offspring, and occasionally have. However, this is also the case with wolves and coyotes, which are universally considered distinct species. And many bacteria and plants reproduce without mating at all, which provides further confusion.

But, according to Poulsen, treating the two African elephant species as one has had dire implications for their respective conservation. When forest and savanna elephants are bundled together as “African elephants,” it inflates the true population of each species.

“With a larger population, the conservation status of the ‘African elephant’ can be listed as ‘Vulnerable,’” Poulsen says, “which allows some [southern] African countries the possibility of trading ivory.”

If the IUCN recognized forest and savanna elephants as distinct, both species would be considered “endangered,” likely necessitating stricter rules for trading ivory.

According to Poulsen, the current unified conservation assessment is a barrier to the protection of forest elephants in particular. In Central Africa, 62 percent of forest elephants were lost between 2002 and 2011, primarily due to poaching. However, as they are considered the same species as the savanna elephant, the IUCN recorded a smaller overall loss in the “African elephant” population. A study in 2013 by Maisels found that current forest elephant populations are only at 10 percent of their potential size.

We are losing these elephants without knowing much of what their extinction might mean for Afrotropical forests, for Central Africa, and even for global climate.

“The problem is that elephant populations are doing poorly in most places and allowing the sale of ivory has traditionally grown the demand, rather than saturating it, leading to killing across the entire range of both species,” Poulsen says.

Their size matters. Although smaller than their savanna counterparts, forest elephants are still just that: elephants. Simply by walking around, they can shape their environment. By moving in herds, their impact is multiplied. By stomping saplings, peeling bark, breaking limbs, clipping branches and trampling vegetation, forest elephants generate trail systems that can stretch tens of kilometers.

All of that elephant activity shapes the forest canopy. Poulsen and his colleagues say that, although destructive, the elephants clear the understory of the forest, allowing large trees to spread their roots and grow to their greatest heights. Without this service, greater competition for light and soil could slow tree growth and reduce trees’ potential size.

Elephants are also the largest fruit-eating animals on the planet, and they aren’t picky about their food. They consume more than 500 plant species in Central Africa. Plants that produce fruit often rely on animals to disperse their seeds far and wide. Since elephants are so large, they can eat and carry seeds that are too big, hard or fibrous for other, smaller animals. Forest elephants, and forest elephants alone, disperse the seeds of at least 43 plant species in Central Africa.

By doing so, they also boost the odds that the seeds will take root. The digestive tract of elephants improves the germination time and growth rates of seedlings that pass through it.

Additionally, the wide swaths of forest floor that elephants open up provide ample space for new seedlings to settle.

Dung is another important contribution from forest elephants. Although poop may seem an unlikely gift, it is a critical ingredient for lush forests. Besides light and water, the most important thing for forest health is nutrients. As elephants chew, swallow, digest and excrete, they unlock and redistribute nutrients like sodium and nitrogen that would otherwise stay put. And when they excavate termite mounds and salt licks, they unearth rare nutrients like potassium, calcium, magnesium and sodium, which would have been previously inaccessible to the rest of the forest. Elephants in the forest unlock and redistribute the building blocks of life, broadly dispersing ingredients both rare and critical throughout the forest.

“I have walked through forests with healthy elephant populations and forests that have been elephant-free for decades. There is a stark difference,” Poulsen says. “Elephant-free forests can have a thick understory and middle story with lots of herbaceous vegetation and thorny vines, visibility is limited and it is difficult to walk through. Forests with elephants can look like a park with good visibility and well-worn trails to walk along.”

The great footprint of the forest elephant doesn’t tread on just Central African forests. Tropical forests are an integral component of global carbon storage. The larger the tree, the more carbon it sequesters over its lifetime.

“While there is a big focus on stopping deforestation, we speculate that the loss of elephants might also affect the ability of forests to store carbon,” Poulsen says.

Because forest elephants are key to the growth and survival of large trees, the loss of elephants means less carbon sequestration by Africa’s forests — and a warmer planet, according to the paper.

To conserve both African elephant species — and every plant, animal and fungus that relies on the ecosystem services they provide — the demand for ivory must end. Poulsen is adamant that the two species must be listed as distinct in order to have the proper restrictions in place for the ivory trade.

Poulsen says the U.S. public can help by expressing concern for elephant conservation to their congresspersons. Although Central Africa may seem distant, the U.S. Fish and Wildlife Service (USFWS), as well as other federal agencies, delegate a portion of funding to international conservation in the African tropics. Poulsen also encourages speaking out against allowing tusks and elephant body parts to be imported into the United States and elsewhere.

This spring, the Trump Administration allowed elephant parts to be imported via the USFWS on a case-by-case basis.

“The only way to stop the ivory trade and the killing of elephants,” Poulsen says, “is to shut down all trade of ivory, everywhere.”

This article by Maria Salazar was first published by Mongabay.com on 08 Oct 2018.

there is a pattern, divine in origin. this pattern has been decimated and violated by manunkind. in his rampant need to quench a thirst he does not understand, he expands, eats, destroys. he obtains less than zero satisfaction from this exercise in ignorance yet keeps on doing the same. some of us actually deem our species as superior, yet repetitions of ultimately self destructive, cruel and stupid behaviors, yielding the same results, seems to indicate other(un)wise.