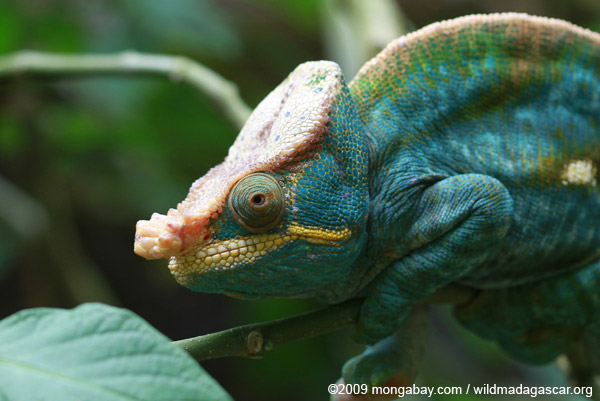 Madagascar’s color-changing chameleons originated in Africa and crossed over to the island some 65 million years ago, concludes a study published this week in the Proceedings of the Royal Society B.

The research, which is based on genetic analysis of 174 chameleon species, found that the ancestors of today’s chameleons crossed channel between the African mainland and Madagascar twice: first 65 million years ago and then again 48 million years ago. The findings suggest that Madagascar’s chameleons followed a path similar to other migrants to the island — hitching a ride on floating debris washed downstream by African rivers.

Once in Madagascar, those lizards diverged into dozens of species, making the island the center for chameleon biodiversity. Today Madagascar’s chameleons are found across the island’s divergent ecosystems and exist in a vast array of sizes, ranging from the diminutive Brookisia chameleons — one of the world’s smallest reptiles — to the one-meter-long Parson’s chameleon.