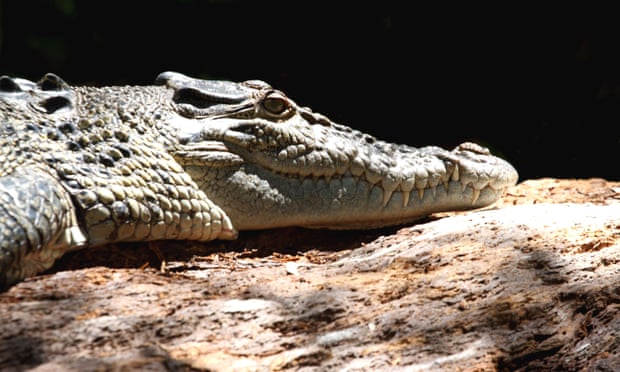 A man has escaped with minor injuries after reportedly prising the jaws of a crocodile off his head during an attack in far north Queensland.

Paramedics say the 44-year-old man was bitten by a crocodile near Lake Placid Road, in the Cairns suburb of Caravonica, about 12.45pm on Thursday.

He suffered minor puncture wounds to his scalp, the side of his face, shoulder and finger. A critical care paramedic, Paul Sweeney, said he was lucky the injuries weren’t “significantly worse”.

The man was swimming before he felt a “sudden impact” clasp on the top of his head that he recognised as a crocodile.

“He put his hands into the jaws to prise them off his head, and when he did so and let go the jaws snapped shut onto his left forefinger,” Sweeney said.

Having freed himself, the man took a “slow swim” back to shore for help.

“He was obviously concerned making that swim that the animal would come up and attack him again, but thankfully it didn’t,” Sweeney said.

The man’s vital signs were good and there was minimal blood loss, and he was transported to Cairns hospital in a stable condition.

“When you consider that had the crocodile bitten into his neck or his throat where the major blood vessels are, then it could have been a fatality,” Sweeney said.

“Your skull is pretty hard and there was no breaks or fractures or punctures to the skull, this was merely scalp injuries and the side of his cheekbone and his shoulder and his finger.”

Sweeney described the man as a “fit individual” who had been training at the time.

“He’s quite a robust individual who insisted that he’d be back swimming there soon, so he’s a braver man than I,” he said.

Lake Placid, a deep pool off the Barron River, is a popular park and barbecue area, about 15km from the Cairns CBD, that has had recurring problems with resident crocodiles.

Wildlife officers will conduct a site assessment and seek further information about the attack to assist with the removal of the animal.

Only two weeks ago officers announced they would try to catch and remove a 2m reptile seen lurking there.

Department of Environment and Science officials said the crocodile was seen swimming but submerged when approached by people.

Wildlife officers placed an extra “recent crocodile sighting” warning sign at a viewing platform on the edge of the lake.

There had already been a crocodile sighting warning sign there from an earlier sighting.

Wildlife officers were investigating the attack on Thursday, which was the first since a man was bitten while snorkelling at Lizard Island on 23 September.

The man was bitten on the head and neck but survived after being flown to Cairns hospital and treated for injuries that were not life-threatening.

This article was first published by The Guardian on 28 January 2021. Lead Image: A man has been bitten by a crocodile while swimming in Lake Placid, a pool on the Barron River on the outskirts of Cairns, Queensland. Photograph: Joanne Weston/Alamy.

That’d certainly put me off going for a swim!