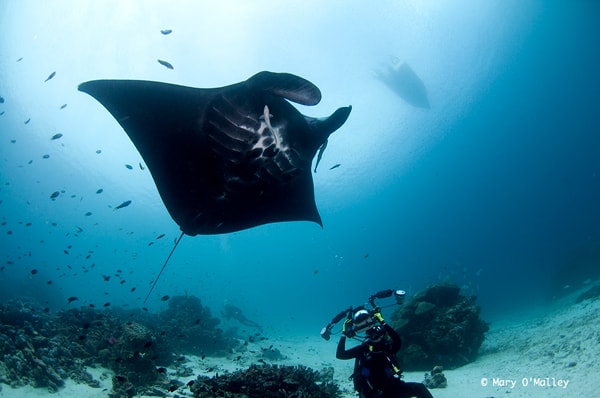 A new study in the open access journal PLoS ONE estimates that manta rays are worth $140 million a year in tourism across 23 countries, significantly outweighing the worth of manta ray gill plates, which have become the newest craze in Traditional Chinese Medicine.

“As an example in Indonesia, revenue to fishermen from manta gill plates is estimated at roughly $400,000, while manta tourism brings in over $15 million in revenue to communities that can continue year after year without depleting manta populations,” says lead author Mary O’Malley in a press release.

In recent years, manta rays (comprising two species) have been targeted for their gill plates, which are increasingly believed to be medicinal in East Asia. But the new study finds that the gill plate trade in manta rays is worth only around $5 million a year, or about 3.5 percent of their worth as tourism species. As incredibly slow breeders, manta rays are particularly sensitive to overfishing.

“While the meat of these animals is deemed to be of poor quality and is worth little the gill plates or branchial filaments have become highly sought after in Asian markets where they are utilized in a tonic marketed to treat a wide variety of conditions,” the researchers write. The plates are purported to cure all sorts of diseases from asthma to chicken pox to cancer. However, the Manta Trust notes on its website that there is no evidence that the gills are medicinal.

“Some practitioners even [admit] that gill plates are not effective and that many other alternatives are available,” according to the NGO, which is devoted to protecting the marine animals.

This March both manta ray species—the giant manta ray (Manta birostris) and the reef manta ray (Manta alfredi)—won new protections from the CITES (the Convention on International Trade in Endangered Species). Listed under Appendix II, the manta rays won tougher regulations but not an outright ban.