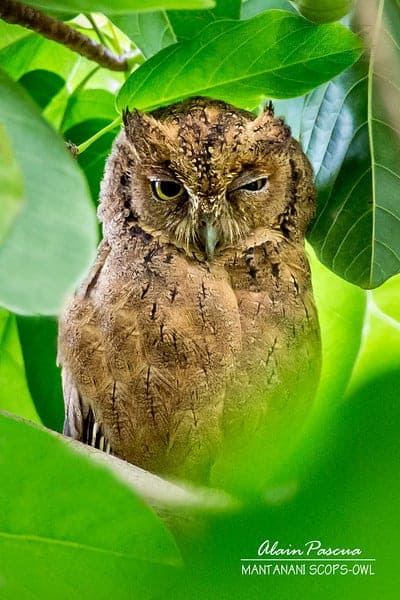 I and Rey Sta Ana, fellow co-founder of Wild Bird Photographers of the Philippines (WBPP), have almost given up the opportunity to photograph this species as the first sighting made our island guide so excited he forgot the exact place where he saw it, and when he brought us there he was in a quandary in what tree and branch did he first see it. His uncertainty and movements would later make the bird fly out to our utmost frustration…

But when our companion Rommel M. Cruz of Birdwatch Palawan Ornithological Society made a last ditch effort to scan the area, there he saw up above a canopy the MANTANANI SCOPS-OWL (rufous morph, first photo).

To our great surprise some minutes later, there is a second one (brown morph, second photo) just beside it but earlier hidden by the leaves and branches.

We though one is adult and the other an immature, but we didn’t know which. Desmond Allen later confirmed both are adults in different morphs.

MANTANANI SCOPS-OWL is listed by Birdlife International as Near Threatened because there are some indications that its very small range is occupied by a moderately small, fragmented population which is undergoing a continuing decline owing to forest loss and degradation. It is endemic to the islets off Sabah, Malaysia, and off Palawan in the Philippines, as well as to islands in the Sulu archipelago and central Philippines.

We’re fortunate to photograph it in Pandan Island where birding has been somewhat restricted, but with the help of Puerto Princesa City Tourism Office Head Becky Labit, a very dear friend, and fellow wild bird photographer Bert Madrigal, our access to the island mas made possible thru Legend Hotel which also provided our boat transportation and accommodation.

Thank you to Canon Marketing Philippines, Inc. (CMPI) for the 5D3 and 300mm f/2.8 II, and to Rommel Cruz for guiding us.

For other photos, please visit Wild Birds of the Philippines at https://www.facebook.com/philippinebirds

this is really interesting

Does anyone know anything of the Scops Owl in Greece. I frequently hear these in the summer evenings here in Corfu

An excellent read and beautiful shots of a great bird, congratulations.

Great read Alain! It’s time to showcase the beauty of Philippine birds to the world 🙂