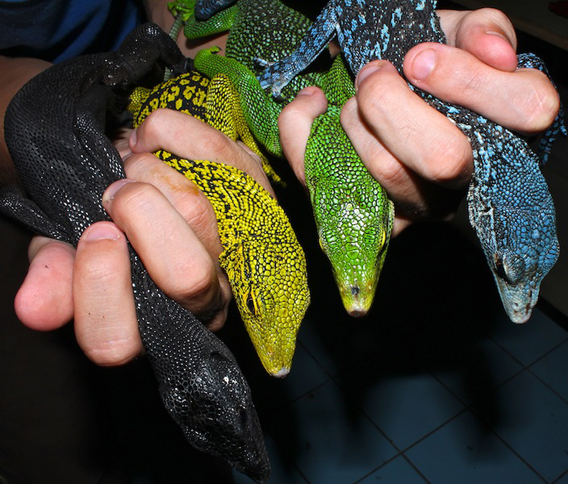 The world’s monitor lizards remind us that the world was once ruled by reptiles: this genus (Varanus) includes the world’s biggest lizards, such as the stunning Komodo dragon and many other island kings. A large number beautifully-colored and patterned, these lizards are known for their intelligence and their apex role in many island food chains. However, a new study finds that the world’s monitors, especially those in Southeast Asia, are vanishing due to the international pet trade and for their skins, which are turned into handbags and straps for watches. Meanwhile the rapid destruction of their rainforest homes is exacerbating the situation.

Many of the monitor species in question are protected or regulated by international and national laws. However, the laws have not been strong enough or received adequate enforcement to keep many species from being over-harvested, according to the new paper in Herpetological Conservation and Biology.

“It is their colorfulness, their rarity value and strong protection status that drives the demand,” says co-author Mark Auliya, Helmholtz Centre for Environmental Conservation (UFZ). “Quite often four-digit amounts are paid, for pairs occasionally even five-digit sums.”

For example, in Indonesia a lack of quotas has put many monitors at risk. Even for the few species that have quotas there, the quotas are not based on field-based population studies. Even more alarming many of the monitors caught for the international pet trade perish before they make it to destination countries. According to one assessment, only 33 percent of tens-of-thousands of monitors captured in Papua province, Indonesia actually survived to the pet store.

Monitors are also killed for their skins, which are used to make fashion items, such as purses. While this trade impacts less species than the pet trade, it can still heavily deplete wild monitors.

“Consumers should be aware of their responsibility in purchasing wild captured reptiles,” Auliya noted. “Therefore, captive-bred specimens from reliable sources must always be favored and also strongly promoted.”

In addition to facing overexploitation, monitor lizards are losing habitat rapidly as rainforests are destroyed across Southeast Asia for monoculture plantations (such as palm oil and pulp and paper), logging, mining, and road projects.

“Those species in which extinction risk is most likely to occur first are arboreal species endemic to small islands and associated with pristine rain forest habitats,” the researchers write.

Currently, researchers have documented over 70 species of monitor lizards, however new species continue to be found—even big ones. In 2010, scientists discovered a new species of monitor measuring two meters (6.5 feet long) and weighing 10 kilograms (22 pounds) in the Philippine jungle of Luzon Island. Dubbed the Northern Sierra Madre Forest monitor (Varanus bitatawa), the discovery shocked the world with the fact that such a big animal could have hidden from science for so long.