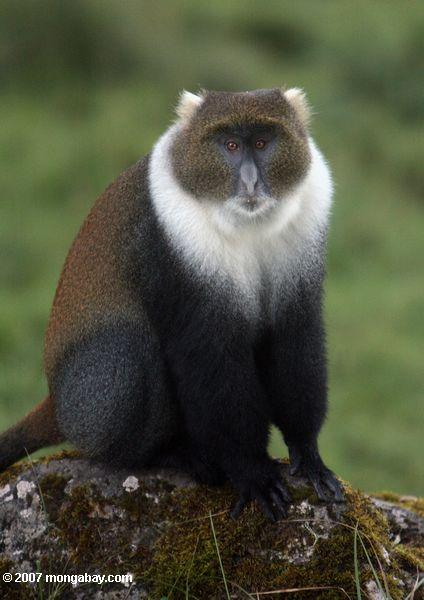 If you’re monkey—say a samango monkey in South Africa—probably the last thing you want is to be torn apart and eaten by a leopard or a caracal. In fact, you probably spend a lot of time and energy working to avoid such a grisly fate. Well, now there’s a simpler way: just stick close to human researchers. A new study in Behavioral Ecology finds that samango monkeys (Cercopithecus albogularis erythrarchus), also known as Stairs’s white-collared monkey, feel a lot safer from land predators when they know humans are close by.

Studying samango monkeys in the Soutpansberg Mountains of South Africa, researchers were curious about how these monkeys, which have long been habituated to scientists, may change behavior depending on the presence or absence of humans. Headed by Katarzyna Nowak with Durham University, the scientists placed peanut feeding buckets for the monkeys at various heights in trees. Arboreal browsers, samango monkeys eat up-and-down trees, but like many such monkeys they show a preference for eating higher up in trees rather than near the ground. Scientists believe this is because it helps the species avoid ground-based predators.

“Both of our study troops showed a ‘vertical axis of fear’ which means that the amount of food monkeys depleted from buckets varied with height with the most food left uneaten at ground level, where there is a risk of predation by leopards and caracals,” Nowak explained to mongabay.com.

Yet things changed when the monkeys knew people were nearby. Measuring how much food was left over in the buckets when people were watching versus when people were absent, Nowak and her team found that monkey banquets lasted far longer with people nearby.

“Animals are expected to deplete more food where and when they feel safe,” she said. “In the presence of a human follower, these habituated monkeys depleted significantly more food than when human observers were not present…They ate more food at every height, with the most notable differences at the bottom two levels.”

So, not only did the monkeys feast more when people were near, but they also ate significantly more at lower levels, those very places they usually avoid due to fears of becoming lunch for a wild cat.

According to the study, the monkeys likely view the researchers “as human shields” against land-based predators. In contrast there was less change in how much food was eaten in higher stations, meaning that the monkeys did not view people as effective shields against air-based predators, such as the crowned eagle or African black eagle.

“Researchers are probably perceived as shields against terrestrial predators in particular, and we speculate that the observed patterns may be due to humans passively deterring leopards from the immediate area, rather than playing the role of active sentinels,” explained Nowak. “Leopards are generally wary of human beings and are persecuted for perceived livestock depredation and hunted legally and illegally below the mountain where we conducted this research.”

The research has much more wide-ranging consequences than just showing-off the cleverness of samango monkeys. For example, the paper calls into question earlier research that found the same samango monkey troupes determined their foraging based on the threat of eagle predation, but not leopards. Yet, given the effect of human observers, how much of this was an accurate record of behavior and how much were the researchers—the human shields—unknowingly skewing the data?

In fact, says Nowak, this research helps call into question just how much so-called “habituated” animals are really behaving as if humans are no longer around. In fact, a growing amount of research is showing that there’s no such thing as non-altered behavior, so long as the animals know people are present.

“In the early 1990s, Lynne Isbell and Truman Young working in Amboseli National Park, Kenya, documented a higher rate of predation on vervet monkeys by leopards when researchers were away from their field site (i.e., re-stocking on supplies in Nairobi). They called it the ‘Nairobi effect,'” said Nowak. “But it’s challenging to study such effects in matching conditions with and without observers present. While Isbell and Young used predation rate as a measure, we used the amount of food a forager leaves behind.”

This also doesn’t mean all monkey species and groups would act similarly—i.e., using humans as shields against predators. In fact, many monkeys are hunted by people and will treat researchers as predators themselves until they learn the difference between those that hunt them and those that don’t. In other words, human presence always complicates things.

“If observer presence can alter the way in which animals forage and use space, this has obvious implications for observer-led studies of vigilance, trade-offs and predator-prey interactions,” said Nowak.