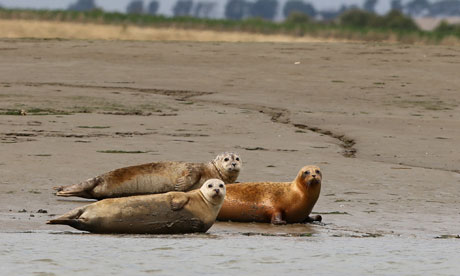 More than 700 seals have been spotted in the Thames Estuary in the first ever count carried out by air, land and water. Conservationists and volunteers recorded 708 grey and harbour seals along the Thames in a survey stretching up the estuary to Tilbury, the Zoological Society of London (ZSL) said.

The survey involved recording seals spotted from boats, from the air or by teams on the ground investigating small creeks and rivers, with the GPS co-ordinates of sightings noted.

The aerial survey enabled researchers to count seals on the outer sandbanks of the estuary where colonies of up to 120 seals were recorded in remote and undisturbed spots away from people and boats.

Boats were used for surveying areas of the Medway and Swale estuaries, while researchers on foot were able to get to spots the boats could not reach.

It is the first such complete assessment of the seals in the Thames following a boat survey by ZSL last year.

The survey was timed to coincide with the annual seal moult, when harbour seals shuffle onto sandbanks to shed their coats and grow a new layer in time for the winter, making them easier to spot.

The scientists estimate there were around 500 harbour seals and 200 of the larger grey seals, although the exact figures need to be confirmed through further analysis.

ZSL’s conservation scientist Joanna Barker said: “We knew there were a lot of seals in the Thames but 708 is pretty incredible.

“In previous results there’s been a good few hundred in the Thames, but it’s great to have a figure we can use as a baseline.”

She said the survey would be repeated in future years, enabling scientists to see if numbers were increasing, staying the same or declining.

“Now we know the numbers and where they are, it can help with conservation,” she added.

The presence of so many seals is good news for the Thames Estuary, which was declared biologically dead in the 1950s as a result of heavy pollution, but has since largely recovered.

Barker said: “It’s a really good indicator because the seals are the top predators in the marine food chain, and it shows that the marine environment is relatively good and is producing enough food for the seals to eat.”

She added: “At the moment it seems we’ve got a healthy population in the Thames.”

But she warned there had been drastic declines in numbers of harbour seals recently across Scotland, and that seal populations elsewhere could be vulnerable.

The reasons for the declines are unclear but could be down to disease, climate change, the shifting of prey species and competition with grey seals.

With the declines in Scotland, the Thames’ harbour seals are a more important part of the overall European population, Barker said.

The ZSL study will produce the first complete count of harbour seals in the Thames and south east coast, which will help scientists accurately monitor the species to better understand and protect them, Barker said.

In addition to the survey, ZSL also runs a reporting scheme for members of the public who spot seals and other marine mammals in the Thames. Sightings have been recorded at Richmond, by the London Eye and at Canary Wharf.

The public is being urged to report sightings to help ZSL to learn more about the threats faced by marine mammals in UK waters. Sightings can be reported at www.zsl.org/inthethames.